Note: The following is an edited translation of a commentary on the China-US trade dispute from the Chinese-language "Commentaries on International Affairs." 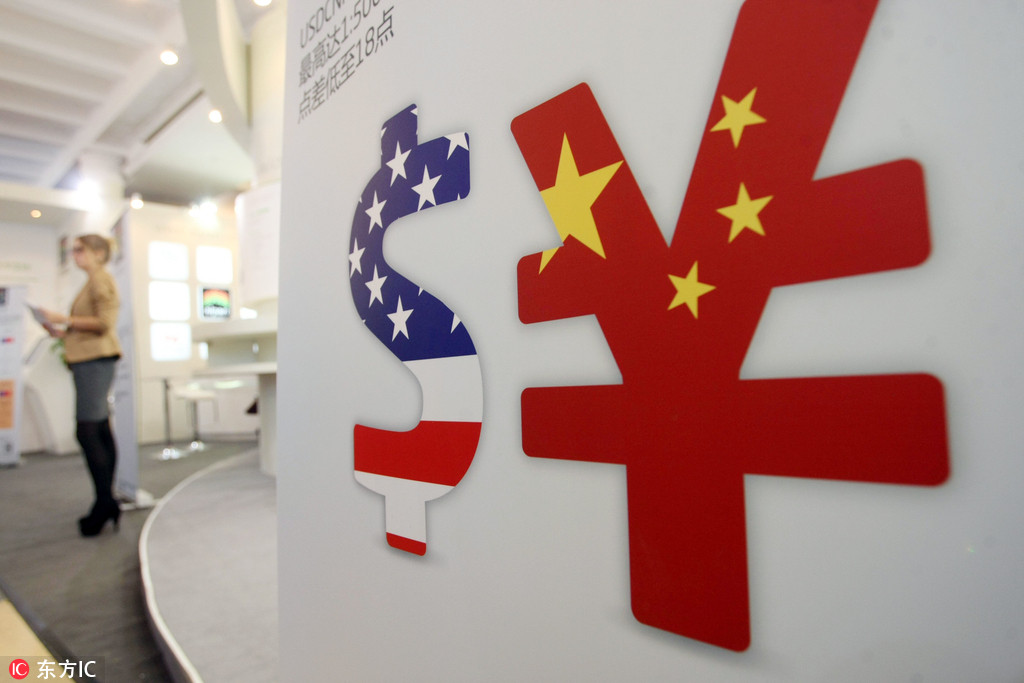 Signs of US dollar ($) and China yuan (￥) are seen during an exhibition in Shanghai. (Photo: IC)

Just like a red-eyed bull facing a tough fight, the Trump administration issued a statement on June 18 threatening to impose a 10 percent tariff on $200 billion of imports from China. This is on top of the previously announced tariffs on $50 billion worth of Chinese goods. The move is retaliation against China's counter-tariffs on American goods. And the US has threatened that "if China increases tariffs yet again, we will meet this action by pursuing additional tariffs on another $200 billion of goods." This means that the US has so far threatened to impose tariffs on Chinese goods with a total value of $450 billion.

In response, China's Ministry of Commerce issued a statement saying that "imposing extreme pressure and blackmail is contrary to the consensus the two sides reached through rounds of consultations, and it disappoints the international community." The Ministry notes, "if the US loses its rationality and unveils another list of Chinese products for additional tariffs, China will have no choice but to take comprehensive quantitative and qualitative measures to resolutely strike back."

According to statistics from China's General Administration of Customs, China exported $429.8 billion worth of goods to the US in 2017. This means that if the US implements its full list of tariffs, the American market will close the door to Chinese goods.

In the era of globalization, world leaders have understood that an act such as closing the door to the world's second-largest economy would be irrational. President Trump is a businessperson who claims to understand the art of deal-making. So why is he responding in this way? His actions reveal panic in the face of an American stock market plunging due to the threat of a trade war, and anxiety in preparing for the upcoming mid-term elections. It also shows frustration with the inability to bend China to America's geopolitical will.

Taking this action at the expense of the people of China and the US, as well as the people in other countries who may be affected, makes it clear to the international community that the goal of the US is not a "trade balance". Rather, they are using tariffs as a big stick to safeguard America's global dominance. And the US has not been restrained in its actions by the risk of global condemnation.

The recent actions of the US are not a solution to its underlying problems. As Francis Fukuyama, who once predicted the "end of history", reflected in recent years, the American political system has become increasingly dysfunctional, and the excessive power of interest groups has eroded the safeguards that protect the rights and interests of the great majority of the American people. Many analysts believe, although the American economy has been performing well in the short term, the long-term trend towards an economic slowdown remains unchanged. And the US has been unable to resolve the structural problems in its economy, such as the rise of assets prices caused by the 2008 subprime crisis and the growing income gap.

A trade war won't solve the problems of the US. But what it will do is damage the multilateral trading system and the global industrial chain. In the face of the destructive approach of the Trump administration, China will maintain its clear-cut stance of safeguarding its national interests and defending the principles of globalization and the multilateral trading system.

In responding to American threats, China will continue to employ a strategy that includes both quantitative and qualitative measures. It is through this comprehensive strategy that real pain will be inflicted on the US. This is the first time the US has encountered tough competition, and if China relents then other trading nations may not be spared similar American pressure. Even Japan's Prime Minister Shinzo Abe, a strong ally of Washington, has demanded that the US abandon its "incomprehensible and unacceptable" tariff policy and comply with World Trade Organization rules.

It is time for the international community to join hands and work together to resist the uncompromising and dangerous actions of the Trump Administration.