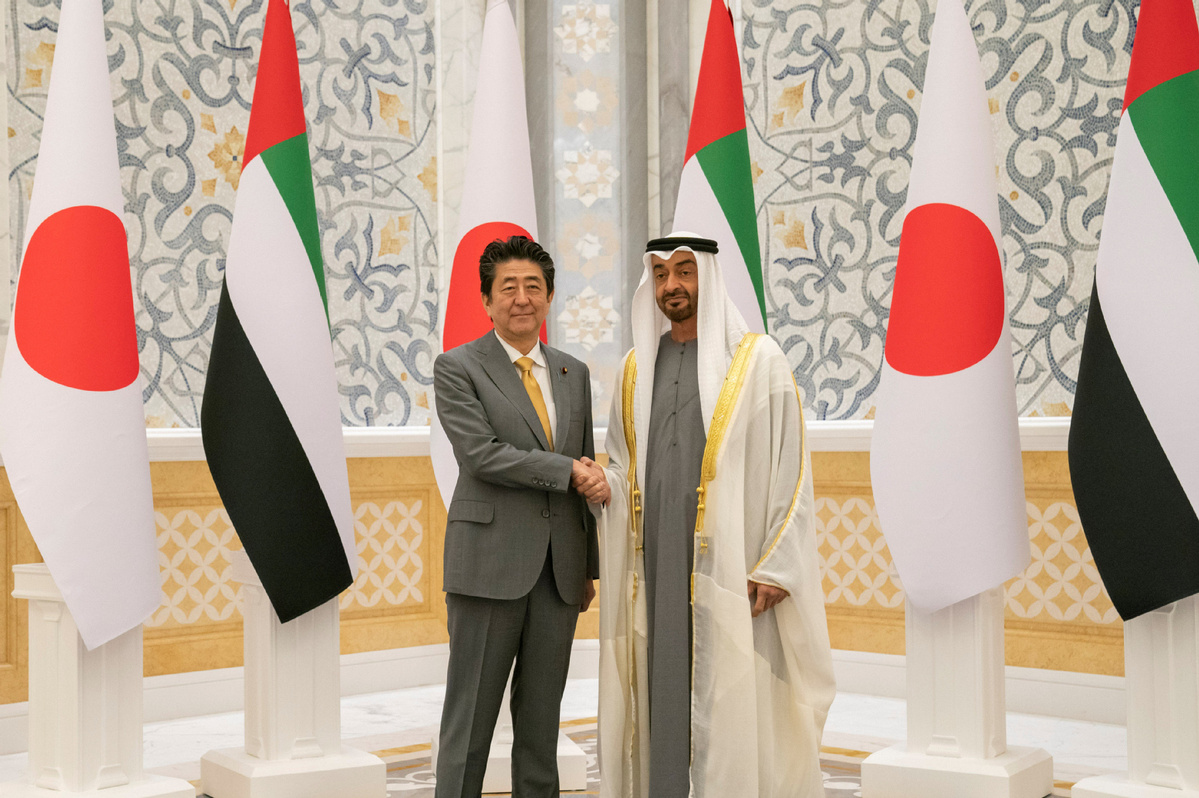 Tokyo's efforts to mediate conflicts and to expand influence in the Middle East met limitations, experts said as Japanese Prime Minister Shinzo Abe concluded his five-day trip to Saudi Arabia, the United Arab Emirates and Oman, and returned to Tokyo on Wednesday.

"The aims of Abe's Gulf tour were threefold judging from the available information: to secure its oil supply amid tensions between the United States and Iran; to win support for the dispatch of Japan's naval forces to the region and to help mediate and prevent an uncontrolled military escalation," said Yu Qiang, a researcher of Japan studies at the University of International Relations in Beijing.

"The three goals were a united, purposeful approach composed of interrelated parts," Yu said. "Its (the tour's) results, however, turned out to be limited."

As an energy-poor island country, Japan has always kept a close eye on Middle East stability. And according to the nation's Agency of Natural Resources and Energy, nearly 90 percent of the crude oil imported by Japan comes from the Middle East and more than 80 percent passes through the Strait of Hormuz, which is partly controlled by Iran.

"Japan's need for energy is the main driver of its increased involvement in the Middle East, and there are concerns that rising tensions there could jeopardize Japan's energy security, a national security priority for Tokyo," Yu said.

In response, Abe kept stressing the need to defuse tensions and the importance of a continuous and stable oil supply to Japan when meeting with the leaders of the three countries.

As the largest crude oil exporter to Japan and the world, Saudi Arabia accounts for about 39 percent of Japan's overall crude imports.

Before leaving Tokyo, Abe reaffirmed Tokyo's decision to send Self-Defense Forces personnel and assets to the Middle East for an "information-gathering mission".

His decision came despite a recent poll by the Kyodo news agency showing 58.4 percent of Japanese surveyed opposing the mission and opposition parties in Japan calling for its cancellation,

Meanwhile, Japan's Defense Minister Taro Kono on Tuesday defended the decision, saying it was in the Japanese people's interest.

"It is in Japanese interest to protect the safety of the navigation in the area," Kono told reporters at a joint news conference with US Secretary of Defense Mark Esper at the Pentagon in Washington.

According to Japan's Defense Ministry, two P-3C Maritime Self-Defense Force surveillance aircraft will start their mission to cover the high seas in the Gulf of Oman, the northern Arabian Sea and the Gulf of Aden on Jan 20; and a destroyer, the Takanami, will leave Japan on Feb 2 to join them, with the Strait of Hormuz excluded from the mission.

Commenting on the mission, Liu Qingbin, a professor at the Institute of Advanced Sciences at Yokohama National University, said that although Japan had reiterated its neutral stance, the mission is still controversial.

"First, it is very hard to believe that Japan, as a close US ally will be neutral in potential conflicts. And second, the dispatch itself is controversial given Japan's pacifist Constitution. And will it really be helpful for the 'safe navigation of Japanese ships in the region'?"

Responding to queries whether Japan would join a US-led mission aiming at deterring Iranian attacks, Kono pointed to restrictions in Japan's Constitution, but added: We will be closely communicating with the United States as an ally."