Accusations around China-Greece cooperation are misplaced 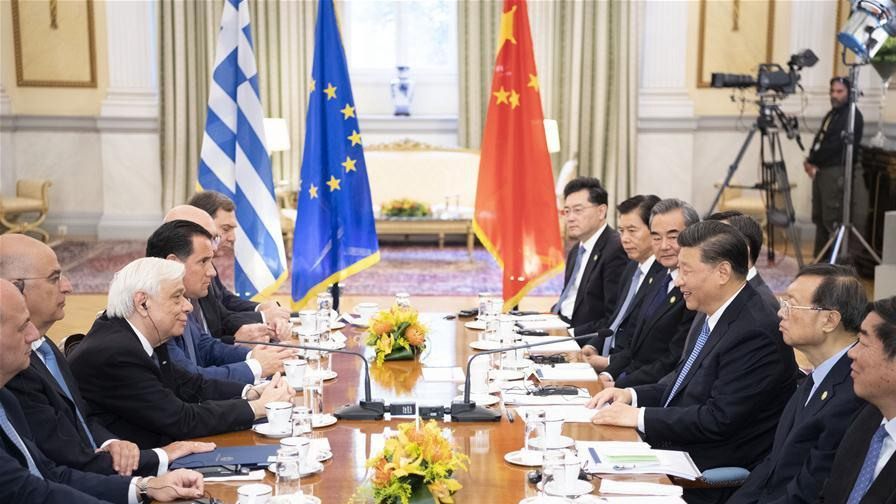 Chinese President Xi Jinping is in Greece for a state visit, the first for a Chinese president in 11 years. He already had in-depth talks with Greek President Prokopis Pavlopoulos and Prime Minister Kyriakos Mitsotakis. It is only days after President Xi and Prime Minister Kyriakos Mitsotakis's meeting in Shanghai, where he was paying a visit to the China International Import Expo. The intensified high-level visits are a sign of the warming China-Greece bilateral relations in recent years.

Recent years have seen an increasing profile of Greece in the whole picture of China-Europe cooperation. Greece, once a country that only reminds Chinese people of its picturesque coast and fascinating culture, is now seen as a friendly European country that is open-minded about cooperation with China and committed to keeping a friendly relationship.

This commitment is manifested in the fact that Greece is the first European country that signed an MOU under the BRI framework in 2018, and then in 2019, Greece decided to join China-CEE cooperation, making 16+1 upgraded into 17+1. There is an agreement on cooperation with China across Greece's political spectrum. Since the election in July, the new Greek government has shown the same degree of warmth as the last government in China-Greece relations.

There is something deeply rooted in their history and people's communication that makes China-Greece relations different. Chinese people are often met with friendly greetings in the streets of Athens and both countries have a glorious history of ancient civilization, for which the Chinese and Greeks have a special connection.

But more importantly, this commitment is a product of the efforts and hard work made for years, which has been built in a solid mutual trust between the two countries. China has also earned the reputation of a reliable partner and good friend of Greece. Many Greeks still remember Chinese support during the debt crisis. Chinese investment in Greece in recent years has been both successful and popular, and Greek exporters' efforts in exploring the Chinese market are also rewarded with tangible results.

However, despite friendship and cooperation between China and Greece being consensual and mutually beneficial, there are still slander and insinuated accusations around their relations. During his visit to Athens in October, US Secretary of State Mike Pompeo accused China of "using economic means to coerce countries into lopsided deals that benefit Beijing and leave its clients mired in debt."

The grievance is also in Brussels. Brussels is cautious about China's growing influence in every part of Europe, including investments in Greece, and resists what it sees as China buying Greece's silence on the human rights issue. Thus some believe China-Greece cooperation threatens European unity and its community of values and some even hype that China's conditions are the 21st-century incarnation of colonialist power.

Every fair mind would conclude these accusations in themselves stem from condescending views and reveal bias against Greece. To suggest Greece is not able to take care of its own interests and thus is vulnerable to any sort of "trap" is an insult to its people. Greece is able to make a well-formed decision as it spots golden opportunities in the Chinese market.

Also, to suggest Greece is a "Trojan Horse" for China in undermining European unity is absurd and shows double standards. China has far more investments in countries like Germany and the UK, but neither has taken such a harsh name. Simply because Greece is small and "in the periphery," it must have become a "Trojan horse" for a big country - this logic is chilling in the 21 first century.

As Greece has acknowledged, China values the partnership between the two countries and hopes to keep the current momentum. Greece understands the opportunity of China to its own economy and development in the neighborhood. The two have the willingness and capability to run the cooperation well and deliver good results.