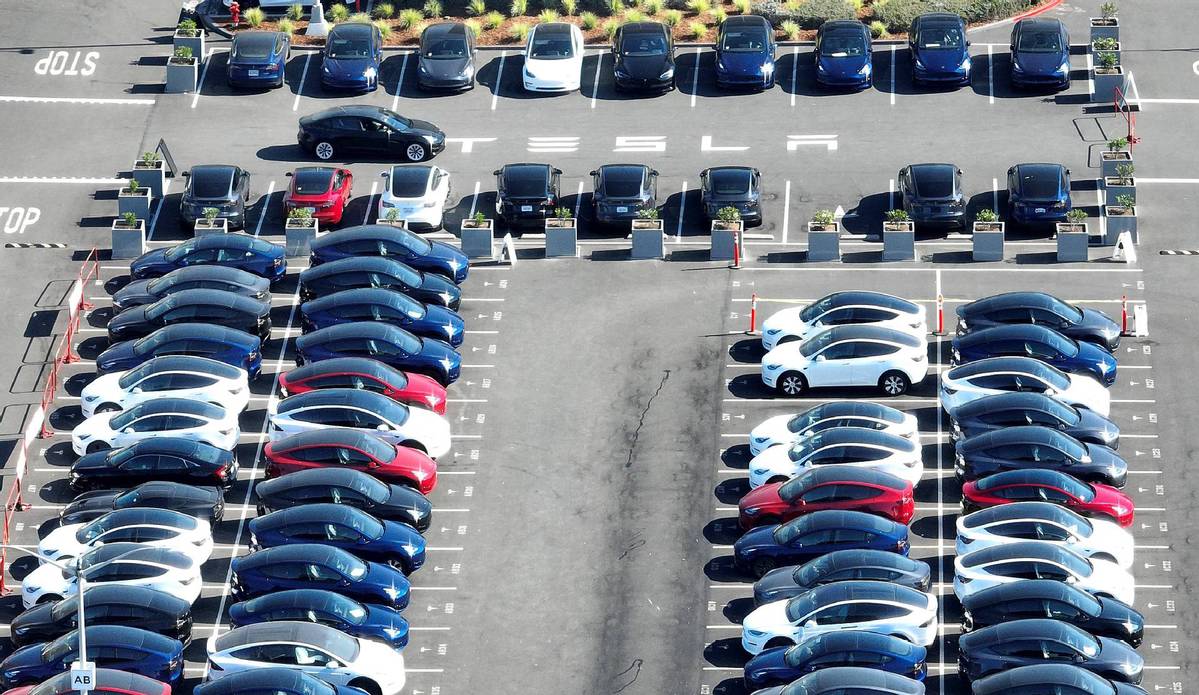 In an aerial view, brand new Tesla cars sit in a parking lot at the Tesla factory on Oct 19, 2022 in Fremont, California. [Photo/Agencies]

When US President Joe Biden signed the Inflation Reduction Act in August, which provides excessive subsidies to domestically made electric cars, solar panels and other products, he seemed to be taking a step forward in carrying out his economic policy that focuses on bringing manufacturing back to the United States. "Made in America", as the slogan goes.

Yet the sweeping legislation has sparked anger and concern even among the US' allies because it violates the basic rules that govern international trade. The European Union has listed at least nine points in the act that run counter to international trade rules, especially the tax credits granted for electric vehicles made in North America, which it says are "discriminatory" and may break World Trade Organization rules. The Japanese government has also called the tax credits "discriminatory incentives" for US manufacturers.

Thanks to the $369 billion package, Europe has already started to feel the pinch of its industries and investment relocating to the United States, a trend that has been accelerated by increasing energy costs on the continent, which are now around five times more expensive than in North America. "I think we need a European wake-up on this point," French president Emmanuel Macron told executives from domestic industrial companies in a recent speech.

Take Northvolt, a major European battery producer, for example. The Swedish group, backed by Volkswagen, BMW and Goldman Sachs, is now looking to expand production in the US mainly because it would receive subsidies amounting to about $600 million to $800 million under the Inflation Reduction Act. That compares to 155 million euros ($158.9 million) in incentives on the table from Germany. The IRA "is moving momentum a lot from Europe to the US", Northvolt Chief Executive Peter Carlsson told the Financial Times.

This has prompted Luisa Santos, deputy director-general at BusinessEurope, a pan-European lobby group, to warn that the US legislation has sent a "dangerous signal" that could encourage other jurisdictions to take protectionist measures.

Yet despite the widespread opposition to the law, the US seems bent on taking a discriminatory attitude when it comes to economic and trade policies to protect its own interests, particularly in sectors where companies from other countries are becoming competitive.

As a member of the WTO, the US should implement relevant industrial and investment policies in line with the WTO, so as to maintain a fair competitive trade order, rather than damaging the level playing fields that all trading countries depend on.