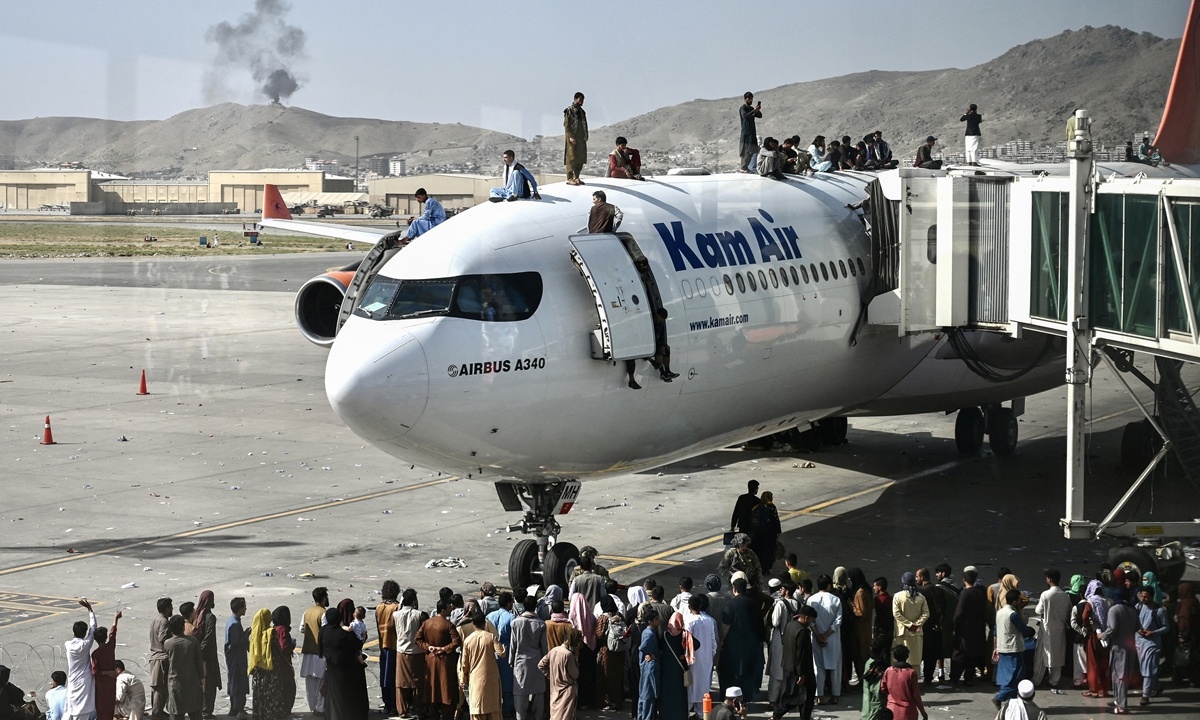 Afghan people climb atop a plane as they wait at the Kabul airport on Monday, after a stunningly swift end to Afghanistan's 20-year war. (Photo: AFP)

The US military's hasty evacuation of related personnel from Afghanistan has caused a humanitarian crisis and secondary victimization to the Afghan people. Although the Biden administration has repeatedly stressed that the US withdrawal is not the reason that the Afghan government was outmaneuvered, the irresponsible retreat has made it a target of public criticism.

Coincidentally, the duration of the war in Afghanistan was similar to that of the Vietnam War, both lasting roughly 20 years. And US' failures in both wars deserve posterity's reflection. After the Vietnam War, many Americans suffered from the "Vietnam War Syndrome." The term originally referred to diseases some veterans had suffered, such as neurasthenia and nerve damage. Later, it gradually evolved into referring to differences between the two parties' view on the war issue, the suspicion of the American military on entering foreign wars, anti-war mentality and the suspicion of the government in American society. Though this sentiment has to some extent dissipated over time, it still continues to shape US foreign policy today.

Washington's failure in Afghanistan could trigger a new "Afghan War Syndrome" in the US. In fact, Washington bears the inescapable responsibility for the collapse of Afghan government forces. Over the past 20 years, Washington has provided superior weapons and equipment to the Afghan army, but largely missed the crucial ingredient of combat training. The US has overemphasized the teaching of tactical skills of the infantry. But it failed to develop the comprehensive combat capability of the Afghan government forces. All these have proved that although the US military has strong operational capability overseas, it is difficult to establish a long-term mechanism to maintain stability in accordance with local conditions.

As a result, the failure in Afghanistan has triggered a sharp backlash in the US. The Biden administration is being questioned and criticized, which may set off a new wave of war weariness, anti-war sentiment and skepticism against government in the American society. In particular, some Republican lawmakers in the US Congress have taken the opportunity to attack the Biden administration. They hope to further impair Biden's approval rating and hammer the Democratic Party in order to gain grounds going into the 2022 midterm elections and the 2024 presidential elections.

This kind of "Afghanistan War Syndrome" with anti-war and skeptical emotions will ferment for a long time. And yes, it will strengthen the "inward-looking" nature of US foreign policy. This means that the domestic agenda will be the primary concern during Biden's tenure - as it reels from the double shock of COVID-19 and the chaos in Afghanistan. At the same time, public support for foreign affairs will decline while domestic pressures will have a greater influence on US leaders' foreign policy. This will force Biden to focus more on economic and social issues in the homeland. The Biden administration will continue the tradition of cautious military use that defined Obama's policies. It will replace "fist diplomacy" based on "hard power" with "value diplomacy" emphasizing "soft power."

However, as the situation in Afghanistan remains highly uncertain, the withdrawal of the US troops will have a greater impact on regional peace and stability. This could lead to a resurgence of extremism and terrorism. In this case, the US will not completely adopt isolationism. Instead, it will still actively implement the intervention strategy, play an "unconstructive role," and intervene in Afghanistan and regional affairs through "offshore counter-terrorism" tactics. It will leverage regional allies and partners to achieve its strategic goals in the region. However, the shift of US strategic resources from the Middle East and Europe to the Indo-Pacific region will not change.

In addition to influencing the domestic and foreign policies of the US, the "Afghan War Syndrome" will also profoundly shape Washington's allies' and partners' perception of the US. Together, this will greatly weaken the US' appeal and action power when it conducts military intervention abroad in the future. Biden's recent blame shifting speech about what has happened in Afghanistan will only reinforce the world's negative view of the US as an unreliable and declining superpower. Regional allies and partners will also reassess the credibility of US' security commitments. All these will limit the US' willingness and ability to launch military operations abroad in the future.

The author is the assistant research fellow, Center for International Security and Strategy (CISS), Tsinghua University.