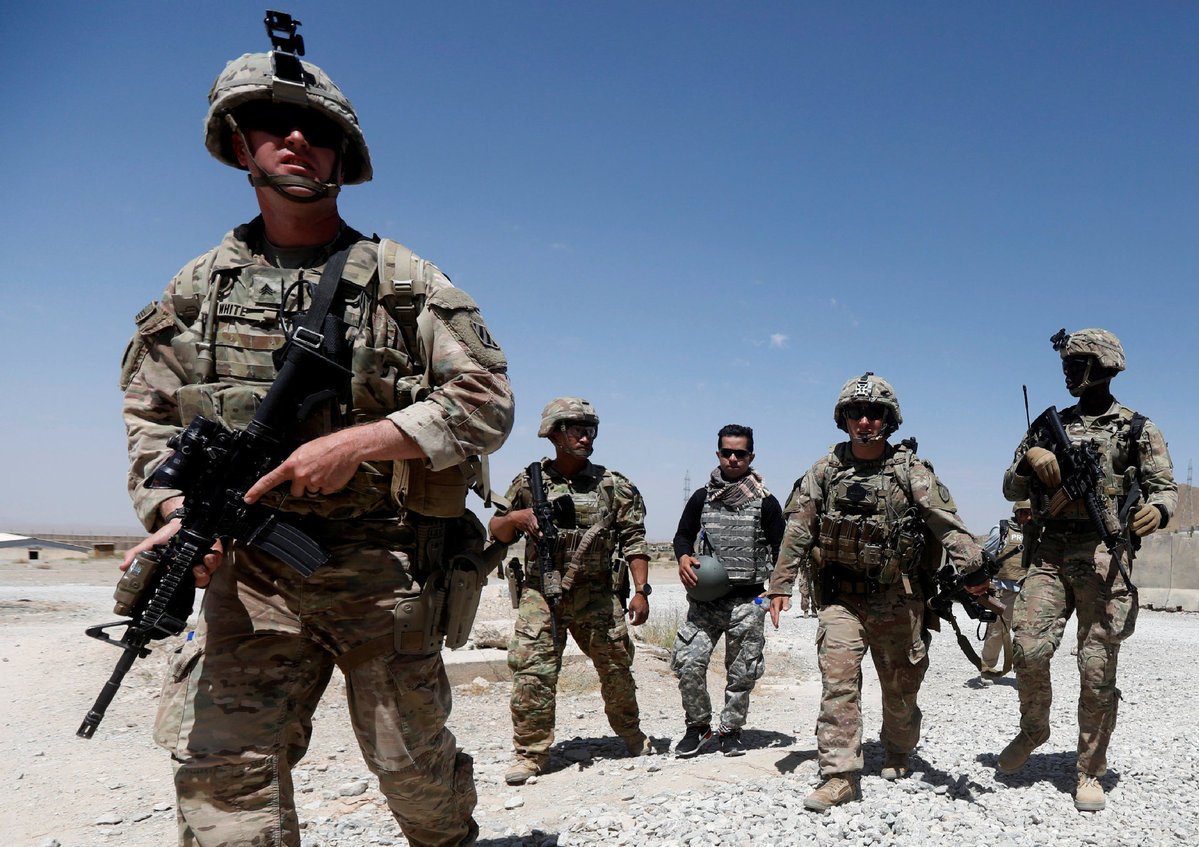 US troops patrol at an Afghan National Army (ANA) Base in Logar province, Afghanistan August 7, 2018. [Photo/Agencies]

United States President Joe Biden made 67 false and misleading statements in his first 100 days in office, according to The Washington Post's fact-checking. But perhaps not on Afghanistan.

In spite of the suggestion that he has tacitly deviated from his campaign promise to bring US "combat troops" home from Afghanistan by withdrawing all US forces, his message on this one appears unambiguous.

Less than two weeks after Biden announced the Sept 11 deadline for the pullout of US troops from Afghanistan, the US has officially begun the withdrawal, earlier than planned.

Given the understanding that the withdrawal is not condition-based, and 9/11 is a fixed deadline for the Biden administration, which is anxious to get rid of the 20-year war as an unaffordable US burden, sending the now 3,500 or so US troops in Afghanistan home should not be difficult.

But that is if nothing substantially disrupts the pre-9/11 withdrawal process, or mounts overwhelming pressure on Biden to rethink his present decision.

Since he has promised to "do it responsibly, deliberately, and safely", he would have to reconsider should something happen to either considerably worsen the security situation in Afghanistan or pose a substantive threat to US interests.

Nonetheless, it is good that the Americans have finally realized they have been waging a war they could never win, and the longer they stay, the more they lose. The Pentagon favors avoiding boots-on-the-ground involvement after withdrawing. The White House no longer takes Afghanistan as a US priority.

Regrettably, however, they are yet to learn the more important lesson the war should have taught them — it is time to re-evaluate war as one of the US' favorite tools of international intervention. President Biden wasn't completely honest when he claimed the US had "achieved" its objectives in Afghanistan. As in Iraq and Libya, the US may have succeeded in eliminating specific military targets, but has never brought the promised peace and security, let alone established the Western model of democracy.

"The Afghan war is only the tip of the iceberg of the US pursuing interventionism, and bringing disasters and chaos to the world. Iraq, Syria, Libya ... without exception, all countries where the US has intervened militarily have sunk in a state where politics is turbulent, development is in stagnation, and people's livelihoods are destitute," says an editorial of the China Media Group.

The editorial's portrayal of the US as "the foremost troublemaker for global stability" may sound harsh to American ears. But this is a truth that should prompt Washington to think twice before indulging its next impulse for military intervention.