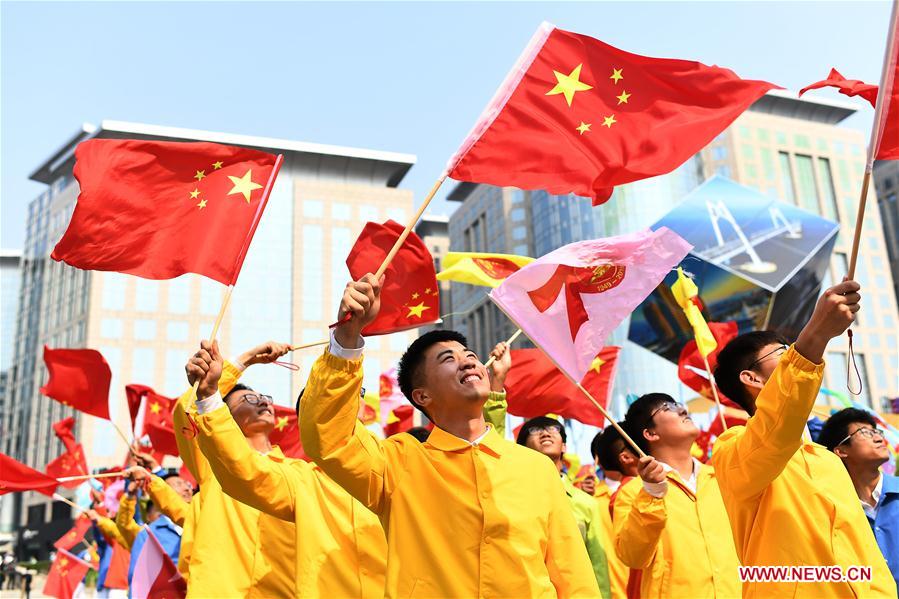 People take part in a mass pageantry to celebrate the 70th founding anniversary of the People's Republic of China (PRC) in Beijing, October 1, 2019. (Photo: Xinhua)

Seventy years are just like the blink of an eye in the history of civilizations. To China, however, it seems only yesterday that Chairman Mao Zedong solemnly declared to the world the founding of the PRC in Beijing on October 1, 1949.

China, as a developing country, has made remarkable achievements over the past seven decades, and it is playing an increasingly important role in promoting global economic development and maintaining world peace. At the same time, while naturally focusing on its own development, it also takes a close interest in and is offering unconditional support for various African countries to achieve their own development.

Seventy years ago, China's agricultural production was subject to the whims of nature with its farmers anxiously studying the sky each day; the country thus suffered a net food deficit, hunger and even starvation being common.

After fast development over the past seven decades, China no longer has a food shortage in any category. In 2018, its total grain production reached 658 million tons, a five-fold increase from 1949.

Moreover, the country has established agricultural technology demonstration and experimental centers in about 100 countries, and dispatched tens of thousands of agricultural experts to them, who have not only been contributing to their host country's food security through rice and corn projects, but also offering a Chinese solution to issues of global food security.

China's leap in science and technology over the past few years can only be deemed as magical. Similar to the food sector, Africa is now a major beneficiary of China's technological advances in space science, ocean exploration, information and communication technology, 5G technology in particular. An aerial photo of a new bridge over Dongting Lake on the Haoji Railway line in central China's Hunan province, on September 19, 2019. (Photo: Xinhua)

China's railway network had also witnessed remarkable progress. By the end of 2018, the total length of lines in operation was 131,000 kilometers, with nearly 30,000 kilometers of high-speed railway, accounting for over 60% of the world total in this sector.

Therefore, it is not by accident that African countries have been looking to China to meet their own massive infrastructural needs. Sino-African cooperation has enabled countries like Kenya to fast track the construction of various infrastructural facilities, roads and railways in particular.

However, the biggest lesson African countries can learn from China's rapid development is poverty alleviation. Before the adoption of the reform and opening-up policy in 1978, the number of Chinese living in poverty, particularly in rural areas, was 770 million. Since the 18th National Congress of the Communist Party of China in 2012 alone, more than 82 million people have been lifted out of poverty. By 2018, this meant that only pockets containing a total of about 16 million were still living in poverty, although work is underway to rescue them as well.

The Chinese are now enjoying higher standards of living than ever before, and the government envisages that all 1.4 billion Chinese people will be leading decent lives by 2020.

These are just some of the major milestones in China's rapid growth to a major global economy. With the economic agenda now a resounding success, Africa feels that China can contribute to stabilizing the region known as the Horn of Africa. This is crucial for securing the gains of economic development for a broad swathe of struggling countries.

Undoubtedly, Africa is willing to learn the secrets of China's success. African leaders have shown a willingness to practice China's example in transforming and building resilient societies through home-grown governance solutions. As a result, the bonds of Sino-African friendship will continue to grow for the mutual benefit of the two partners.