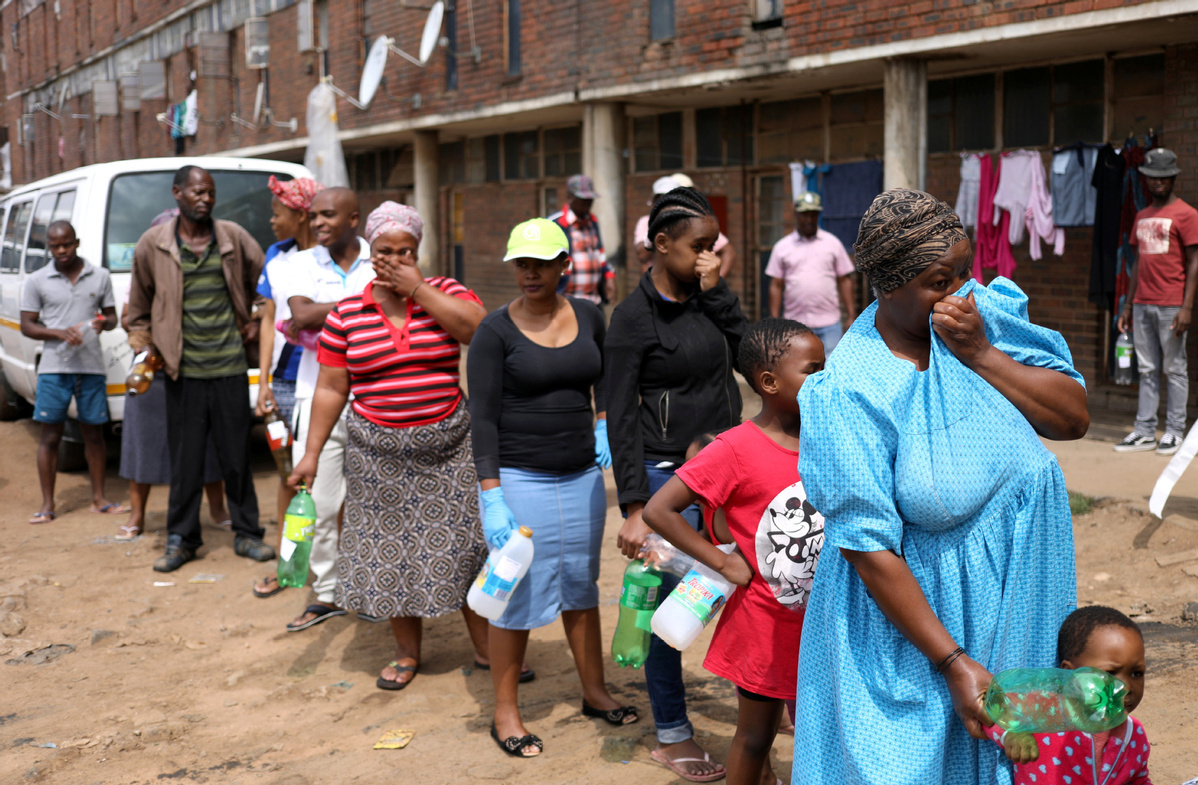 Residents of Madala Men's Hostel cover their noses as they stand in a queue waiting to collect sanitiser from health workers during a nationwide lockdown for 21 days to try to contain the COVID-19 outbreak, in Alexandra, South Africa, April 1, 2020. (Photo: Agencies)

As witnessed globally and more specifically in Africa, women and children are becoming increasingly vulnerable to loss of livelihood, and domestic and gender-based violence in times of civil unrest, natural disasters and economic uncertainties. Unfortunately, the uncertainty over the novel coronavirus pandemic has created an environment exacerbating diverse forms of violence against women and children in Africa.

Among the measures to prevent and control the spread of the virus is the closure of schools, which according to United Nations Educational, Scientific and Cultural Organization data has kept about 1.54 billion students away from school, 743 million of whom are girls with more than 111 million of them being from least-developed countries. In particular, South Sudan, Mali and Niger, which have some of the lowest enrolment and completion rates for girls, have seen 4 million girls locked out of school.

Essentially, this means children, especially girls, dropping out of school or having limited or no access to online education, as many of them double up as caregivers at home. They are also vulnerable to sexual exploitation by the people they are living with during lockdowns and quarantines. These perpetrators could include close relatives, guardians and/or outsiders delivering goods or services to the house.

Similarly, there may be a rise in teenage pregnancies as witnessed during the 2014-16 Ebola outbreak in Sierra Leone－about 18,000 teenagers became pregnant according to the United Nations Population Fund. The economic downturn that analysts say will follow the pandemic will leave many girls vulnerable to early marriages, especially those who lose their parents/guardians to the virus. The situation is worrisome, especially because each year about 12 million girls across the world are married before reaching their 18th birthday.

And given their weak healthcare systems, governments in the region have reassigned their medical resources and personnel to tackle the pandemic, which has disrupted routine healthcare services such as maternity care－which, if not urgently addressed, would put women and their newborns at increased risk of mortality－limited access to basic contraceptive methods and lack of availability of emergency contraception－which may lead to unplanned pregnancies, and exposure to other medical complications in cases of rape and sexual violence.

Many women have become the silent victims of sexual violence during the lockdowns in the region. In South Africa, for example, since the beginning of the lockdown on March 27, there has been a surge in the number of complaints against gender-based violence: more than 2,300 complaints with only 148 suspects being charged. In Kenya, the National Council on the Administration of Justice said on April 1 that sexual offenses have increased, accounting for up to 35.8 percent of all crimes reported since March 12, when Kenya reported its first coronavirus infection. The restrictions on the movement of people, in some instances, have trapped women with abusive partners, and many of these women don't go out to report domestic violence for fear of violating lockdown rules.

Women are also likely to be disproportionately affected by these restrictions as key drivers of the agricultural sector and the informal economy, both of which are being severely undermined by the crisis.

Yet it's never too late for the African governments to change the situation and make women's lives better. For that, they have to recognize shelters/centers for survivors as essential infrastructure, bolster their resource capacity, and find ways to make them accessible to those who need them. The governments should also set up emergency lines that function 24 hours a day to help the public; and the law enforcement department should work closely with other departments to ensure no culprit goes scot-free.

Also, women and children should be integrated into national preparedness plans at the global, regional, national and local levels of any response mechanism against a public health emergency. The study of past epidemics shows the importance of a "twin-track" approach, supporting organizations working directly with the survivors and responding to violence against women and girls.