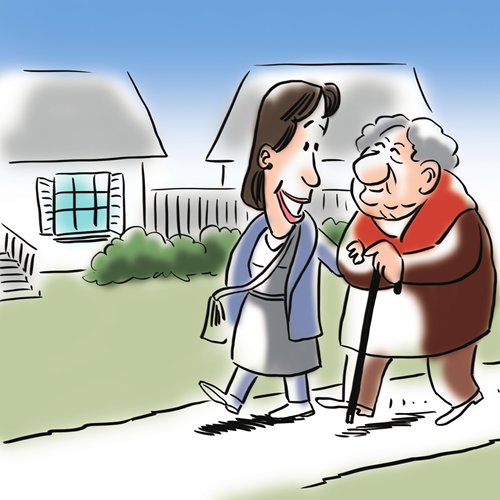 With the rapidly aging population, China now faces the challenge of growing old before it grows wealthy. A graying population doesn't mean society is aging, but represents the silver economy in which people enjoy better health, live a longer life, undertake social activities, and the elderly are properly looked after. We need to organize production, distribution and consumption activities based on people's increasing needs for health and longevity, and establish sound supply-demand relations and generation-to-generation ties.In recent years, the consumption needs of the aging population have become a topic of hot debate in China, as they have promoted the development of medication and healthcare business. At the same time, the trend has underpinned issues of China's population structure, reform of the welfare system, employment generation, public-private partnerships in health services and the Chinese culture of filial piety.How can one deal with the aging population? China needs to adapt to the rules of economics - stimulate investment and consumption, and formulate development strategies for demographic dividends. To begin with, we should improve the quality of life of the working population, extend the first demographic dividend and enhance national productivity by implementing the two-child policy, reform the education system, delay retirement, increase employment rate and improve the salary structure.In addition, we should try to boost the capital of the elderly and their purchasing power by properly managing their health, pensions and housing, foster the second demographic dividend and stimulate sustainable development of the economy via consumption.The report to the 19th National Congress of the Communist Party of China suggests "what we now face is the contradiction between unbalanced and inadequate development and the people's ever-growing need for a better life." This includes generational conflicts because of the aging population. For instance, while some companies believe pensions are too high, the retired staff argue that the low pensions are far from replacing salaries. Moreover, as laborers move to Southeast China, a fundamental pension system should be established by the central government to address the imbalance in allocation of pensions.Building a harmonious generation-to-generation relationship is instrumental in handling the aging population. In terms of public policy, the government should consider efficiency in primary distribution and fairness in the redistribution, reduce taxes, stick to the idea of "putting people first" and integrate the strategies of the demographic dividends to guide national public policies and the development of companies and individuals. With regard to public management, public and private sectors should cooperate to build a social governance system that can properly manage issues such as health, employment and pension, so that the working population can accumulate wealth at an earlier date and feel happy and assured of their pensions in the future.Development strategies should also be formulated in accordance with the timetable of China's aging population. Relevant public policies should be made in the primary stage of the aging society (1996-2020), and service systems be perfected in the medium-degree aging society (2021-30), so that the societal cooperation and generation-to-generation relationships can realize harmony in the hyper-degree aging society after 2030. Take pensions as an example. A fundamental pension system should be established in the first phase, the structure of public and private pensions adjusted to boost employment in the second phase, and a societal cooperative mechanism set up to encourage citizens to work and delay drawing pensions in the third phase.