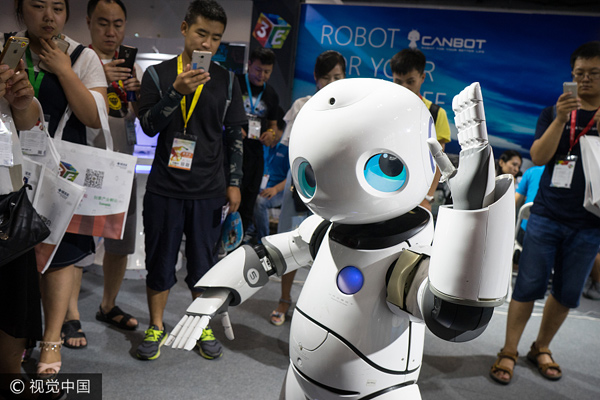 In his report to the 19th National Congress of the Communist Party of China on Oct 18, General Secretary Xi Jinping said that China will work at a faster pace to build the country into a manufacturer of quality goods, develop the manufacturing sector, and promote the integration of artificial intelligence with the real economy.

In the 2017 Government Work Report, presented in March, Premier Li Keqiang said that China will more expeditiously cultivate and foster emerging industries, including the AI sector.

And the State Council, China's Cabinet, issued a development plan in July for new generation AI, lifting AI development to a national strategy. The 13th Five-Year Plan (2016-20) for national scientific and technological innovation and national strategic emerging industries, too, has accorded priority to the promotion of AI technology.

By promoting AI development, China has taken the right approach to seize the valuable opportunity offered by the new global technological and industrial revolution, and the transition of its economic development model. China should endeavor to play the leading role in advancing AI technology as well as setting the laws and regulations if it wants to increase its say in global innovation technology governance.

As a strong technological engine in the new era, AI will bring about drastic changes in various social fields, reshape socio-economic activities and eventually change people's lifestyle and production model.

But the uncertainty associated with AI development will create new challenges to the existing legal system. AI may challenge social norms and laws. For instance, it may cause institutional conflicts within the legal framework in terms of civil subjects, obligations, intellectual property and road safety, which could have a negative impact on economic security, and social management and stability.

The first major problem is whether AI has the capacity of being treated as a civil subject. That is to say, should we treat AI creations such as robots as a "machine" or a "human being"?

On Oct 25, Saudi Arabia granted citizenship to a humanoid robot called "Sophia", becoming the first country in the world to do so. And the European Parliament Committee on Legal Affairs has advanced a legislative motion on civil law for robots, in a bid to grant high-end AI autonomous robots the legal status of "electronic persons".

However, these attempts create challenges for the traditional civil subject system.

Since a robot is different from a natural person, will it have the same legal rights, obligations and liability as a human being even after being legally considered a civil subject? For instance, if some AI for specific use, such as a driverless car or drone, or a nursing robot, causes physical harm or property loss to a person while performing its duty, what punishment, if any, will it receive? Will the AI "machine" bear the full legal responsibility alone? Or will its designer, developer, owner or user be held responsible for the physical injury or property loss?

Furthermore, as AI humanoid robots' learning capacity improves, it might create high-quality literature or art works, or exemplary music compositions. Will such products be protected by the copyright law, and if yes, who will own the copyright? What will be the duration of such patent protection? How will the humanoid robot exercise its rights?

Such legal problems have to be solved sooner rather than later, considering the rapid pace of AI development.

AI development is a complicated project that is related to a country's development. Exploring ways to write the laws and regulations for AI is not only an international necessity but also the requirement of China's innovative technology sector.

Therefore, China should pay greater attention to the potential risks AI could cause during the development process. And based on China's national conditions and social reality, we should make full preparations in terms of laws and regulations to avoid the potential risks, as well as ensure the safe, reliable and controllable development of AI.