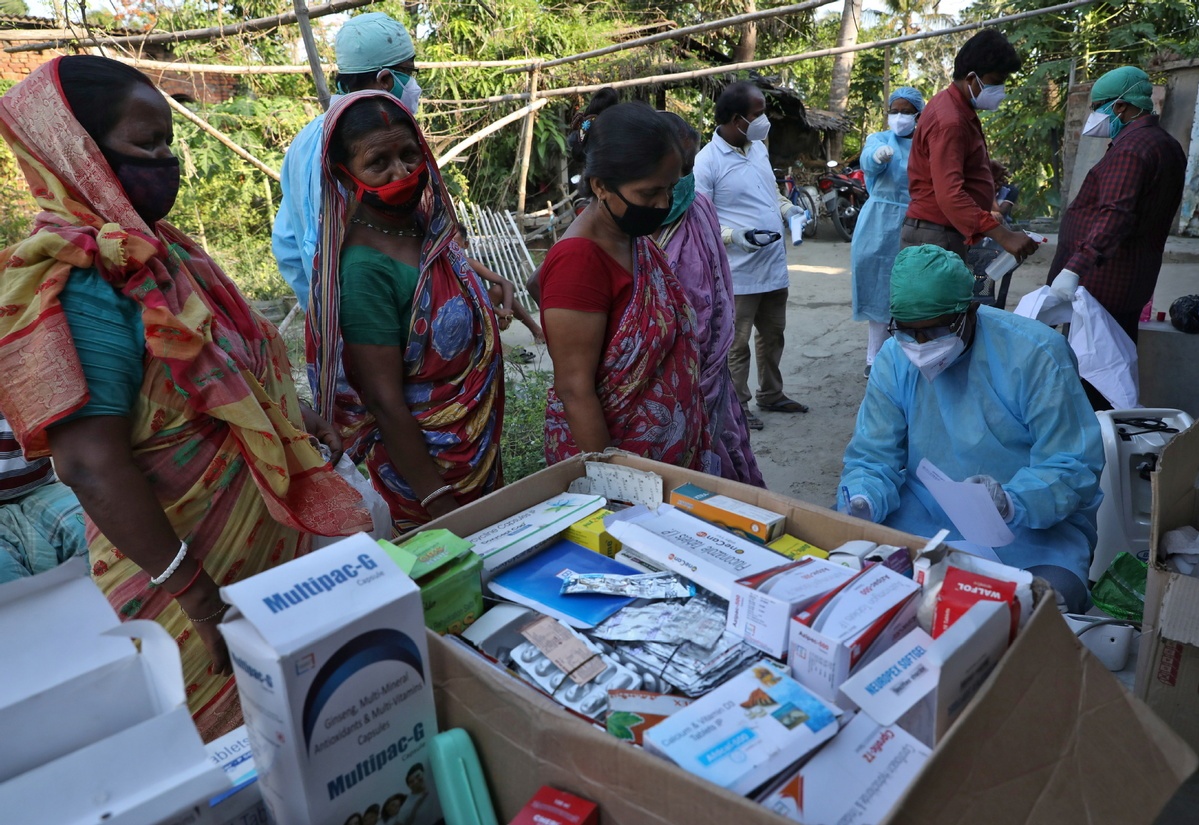 Villagers wait to receive medicine at a free medical camp set up to provide healthcare support to villagers, amidst the spread of the coronavirus disease COVID-19, at Debipur village in South 24 Parganas district in the eastern West Bengal state, India, on May 21, 2021. (Photo: Agencies)

A decline in daily COVID case numbers over the past week has offered some comfort to authorities in India, but experts are warning that a new horror story may be unfolding as the virus is making deep inroads into rural areas.

Witnessing one of the worst outbreaks in recent times, India recorded over 26 million infections and nearly 300,000 deaths by May 23. The new-infection count, however, stayed below the 300,000 mark for the fifth straight day.

But, after hitting big cities hard, COVID-19, in its second wave, is now spreading to villages most of which are not equipped to cope with patients afflicted with the dreaded virus.

The portents are ominous, and alarm bells are ringing.

Nearly 70 percent of the districts in India have been reporting 100 or more new coronavirus cases in the past few days, and there have also been many deaths, said Tanmay Mahapatra, an epidemiologist and medical doctor who works with the non-governmental organization CARE India in Bihar state.

Also, cases in rural areas are often going uncounted or underreported, meaning that the real situation is far worse than what official statistics suggest.

For example, a village in Gonda district in Uttar Pradesh, the most populous state in India, has seen a family lose five members in a period of just 20 days. A village near New Delhi, too, has witnessed successive deaths.

Not just in Uttar Pradesh, many such tragedies are striking families living in other key states such as Bihar, Jharkhand, Madhya Pradesh, Chhattisgarh and Assam.

Though there is no conclusive proof to ascertain if these were COVID-related deaths, the symptoms the dead had reportedly shown were all too evident, according to experts.

"It seems that the worst fear is coming true. In all likelihood, such deaths in villages are going largely unreported," said Anup Sinha, a well-known economist in India.

During a virtual meeting with provincial and district officials on May 20, Indian Prime Minister Narendra Modi called for an urgent strategy to "ensure rural India is COVID-free".

That is no easy task, given the limited resources and poor healthcare infrastructure in the countryside, and the enormity of the task at hand.

At best, villages have small healthcare centers. Qualified doctors are virtually non-existent. If someone is critically ill, the person is normally taken to hospitals in a nearby town or district headquarters. That takes time — sometimes 3-4 hours. Many patients are dying before they can reach bigger facilities with oxygen and intensive care unit, or ICU beds.

"A majority of the people are dying without oxygen. The situation is very alarming," said J. A. Jayalal, national president of the Indian Medical Association.

"Unless there is an urgent, aggressive and united move by all concerned, things will go out of control. With virtually non-existent infrastructure in most villages in India, the only hope is vaccination," he said.

As of now, only 190 million people have been inoculated in India against a total population of around 1.3 billion.

"Aside from ensuring comprehensive mass awareness programme on the need of wearing masks, maintaining social distancing, frequently cleaning hands with sanitizers and soaps, there has to be a robust countrywide vaccination program. Time is running out. We need to act fast. Or, it will be too late," Jayalal said.

Economist Sinha, who once taught at the Indian Institute of Management, Kolkata, said: "We have invested nothing in health infrastructure in rural areas. And that is the reflection of how little we care about our rural people."

"The manpower resources and tools and other facilities in villages are nowhere near what is urgently needed to combat a pandemic of this scale," added Mahapatra from CARE India.

The epidemiologist underscored the need for identifying the recent triggers threatening Indian villages.

"Absence of RT-PCR (reverse transcription polymerase chain reaction) testing labs, doctors, trained nurses, oxygen and ICU beds are the main challenges. Moreover, the villagers always suffer from a fear of social stigma. They refuse to accept that the virus has actually hit them," Mahapatra said.

He called for taking local communities on board in removing misconception and misinformation about the virus.

Village leaders must be engaged with so that they help make people aware of the need for testing and vaccination.

Mahapatra, meanwhile, warned of a third COVID wave which could be even deadlier and costlier in terms of the potential threat to human lives in India.

"It all depends on how we behave and conduct ourselves. Many families in villages hosted big fat weddings, or attended religious congregations and political gatherings. That has triggered the spread," he said.

"We failed to anticipate the consequences, and the whole nation is paying the price. If we repeat the same mistake, we are in for a third wave which would be far more dangerous. Our survival depends on how we act," he said, adding that it is too early to rejoice at the falling number of infections overall.