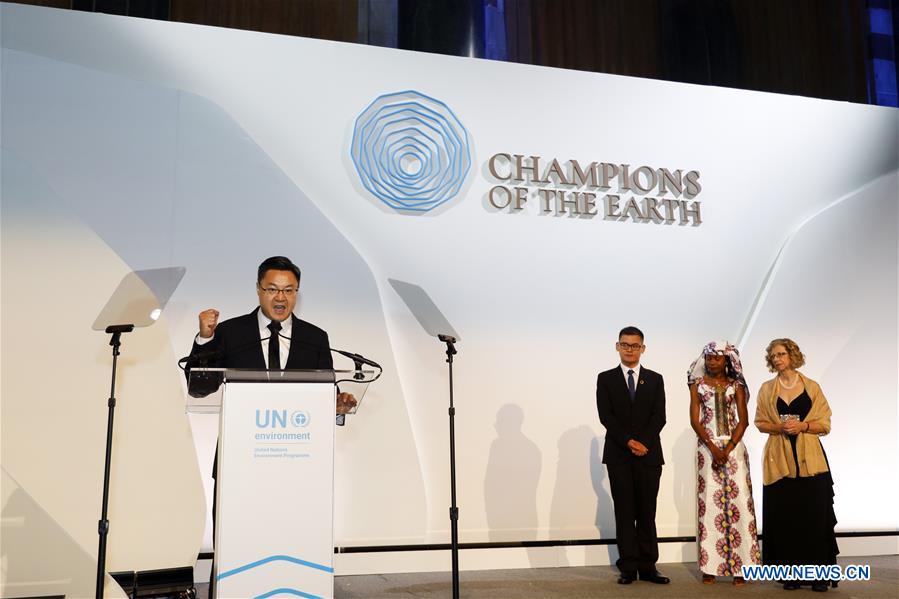 Xu Di (1st L), general manager of the Ant Forest initiative, delivers a speech after receiving the 2019 "Champions of the Earth" award, in New York, the United States, on September 26, 2019. (Photos: Xinhua)

Ant Forest, a green initiative by the world's leading payment and lifestyle platform Alipay, received the "U.N. Champions of the Earth" award in September.

The award is the United Nation's highest environmental honor and was given to Ant Forest for galvanizing more than half a billion people to adopt an eco-friendly and greener lifestyle, thus greatly contributing to ecological protection with the help of digital technology.

Alipay achieved this remarkable feat by inspiring its users to choose from various low-carbon options in their daily lives, such as limited usage of paper and plastic, online payment of utility bills, and green travel using public transportation or bicycles instead of driving cars.

"Green energy points" are also allotted to users each time they opt for an eco-friendly option, and once sufficient points are accumulated, users are allowed to grow a virtual tree in their Ant Forest app.

Subsequently, a real tree is planted by Alipay and its philanthropic partners in lieu of the virtual tree in some of the country's most arid regions. Users can view their trees in real-time via satellite.

The publicity generated is creating a virtuous cycle whereby more and more residents are encouraged to adopt low-carbon and energy-saving lifestyle.

The Ant Forest initiative was launched by the Alipay app in August 2016, and so far, the company has planted almost 122 million trees to revitalize the most arid regions such as Inner Mongolia, Gansu, Qinghai, and Shanxi.

The app has attracted more than 500 million users and has efficiently averted almost 7.9 million tons of carbon emissions by forming a tree coverage area of 112,000 hectares. With these numbers under its belt, the project has become the country's largest private-sector tree-planting initiative.

According to Inger Andersen, executive director of the United Nations Environment Programme, "Ant Forest demonstrates how technology can reshape our world by harnessing the positive energy and innovation of global users."

She further highlighted that "although the environmental challenges we face are daunting, we have the technology and the knowledge to conquer them and fundamentally redesign how we interact with the planet. Initiatives like Ant Forest tap into the best of human ingenuity and innovation to create a better world."

This initiative of Ant Forest is also in line with the Chinese government's strategy of transforming the nation into a "Green Economy". To accomplish this objective, the country is taking aggressive action in expanding its green coverage.

A research report published by NASA early this year highlighted that China has contributed to the increase in the world's green leaf area by almost 25% in the last two decades, despite possessing only 6.6% of world's vegetated area. 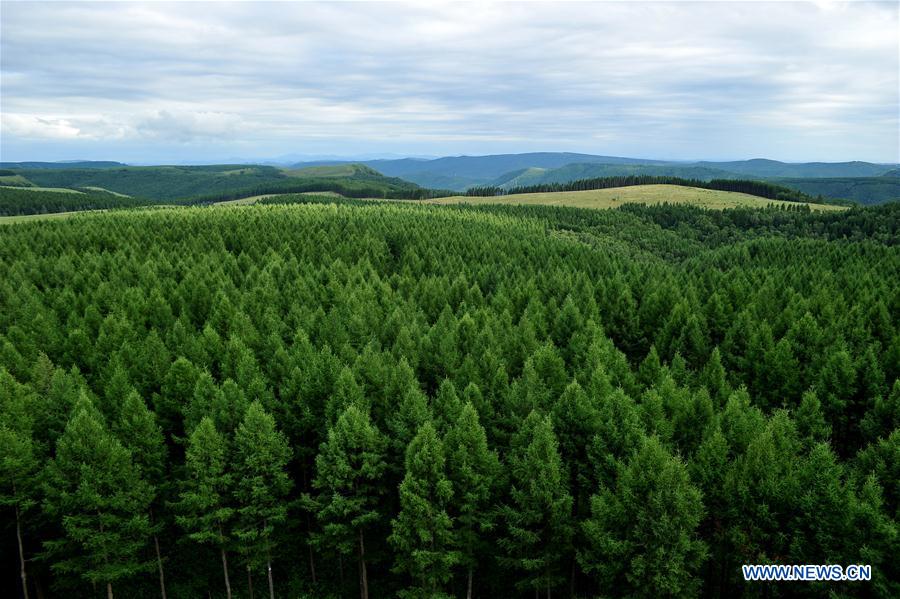 Out of this increase, 42% is due to afforestation while another 32% is a result of farming activities. Also, several forestation projects covering 6.6 million hectares, almost the size of Ireland, is underway in the northern parts of Hebei, Inner Mongolia and Qinghai to cover nearly 23% of the mainland's total land area with forests.

Additionally, China has been making persistent efforts since the 1970s to contain advancing desertification. For instance, the "Great Green Wall", a gigantic anti-desertification program, was initiated in the country's northern region in 1978 to restrain expansion of the Gobi Desert. Thus far, over 66 billion trees have been planted in the area.

Moreover, several laws related to the transformation of arid lands were put in place by the country in the early 2000s to facilitate revival of degraded farms and grasslands.

The Forestry Administration's monitoring report highlighted that desert lands in the country expanded between 1994 and 1999, but contracted from then until 2014. The study also mentioned that such areas had shrunk by 2,424 square kilometers per year in the past decade.

According to the United Nations, an alarming 1.8 billion people are expected to suffer severe water scarcity by 2025, while almost two-thirds of the world's population would experience acute "water-stressed" conditions.

Already, a third of the planet's fertile land has become extinct due to land degradation in the last 40 years. In addition, a landmass almost half the size of the European Union (4.18 million square kilometers) is converted into a degraded land every year, with Africa and Asia being the most impacted regions as a consequence of their increasing population.

It seems clear that unless governments, businesses, and people all come together to form a focused team, it's difficult to contain global warming and its ensuing impact. Going by the warnings of climate scientists, the planet is at a tipping point which could result in unparalleled natural disasters unless urgent actions are taken immediately.

Here, Alipay Ant Forest shows that it is possible to make collective efforts while relying on digital technology for a better and greener future. Several more initiatives, from not just China but all across the globe, are utilizing technology to contribute towards a sustainable and inclusive future of the planet.

Editor's note: Rachana Gupta is an active blogger, poet and freenlance content writer. She is also the author of the book "To The Horizon We Indeed Sail". Opinion articles reflect the views of their authors only, not necessarily those of China.org.cn.