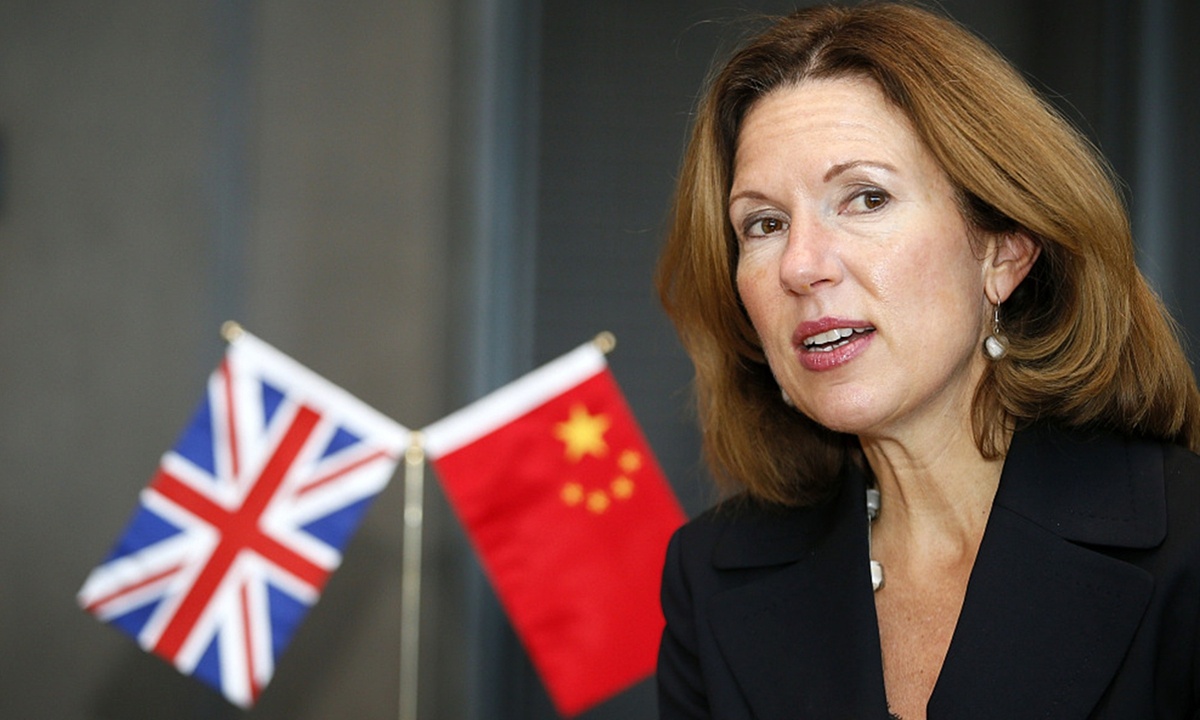 "International media criticism of Chinese authorities is not China hating," Caroline Wilson, UK ambassador to China, said in an article in Putonghua (Chinese) on the embassy's social media platform on March 2.

In the article, Wilson remarked that international media are being distorted in China, claiming that China expelled foreign media journalists, the most ever in the past three decades. What a familiar trick. By avoiding the basic fact that the British and American media delivered evil first, Wilson has turned themselves into victims.

The BBC, for example, believes it is the world's most trustworthy news service and produces fair reports. Then why has it made presumptions of guilt with Xinjiang-related reports? Why has it stuck to false premises of "concentration camps" and "genocide" and then pieced together the so-called evidence out of nowhere, trying to justify its lies?

Wilson tried to defend against the "injustice" that foreign media journalists experienced in China. But she did not mention the cause and effect. In fact, the right and wrong in China-US "media war" have been very clear: Since 2018, the US has ordered Chinese news organizations to register as foreign agents or foreign missions, and imposed obstructions on Chinese media's normal work in the US.

Wilson said that international media criticism of Chinese authorities is not China hating. People like Wilson should stop playing word games such as "Chinese authorities." They are in no position to judge the Communist Party of China (CPC) and the Chinese government. Chinese people know this by themselves. Former US secretary of state Mike Pompeo, for example, has become notorious in China after repeatedly instigating the relationship between the CPC and the Chinese people.

By using the word "criticism," Wilson is trying to distort the facts. It is not criticism that Chinese people hate, but lies, double standards, arrogance and prejudice. People can see it all too well that the BBC has produced fake news about China instead of actual criticism. By contrast, when Chinese media list the facts in a reasonable manner, they are accused of being controlled by the government.

By abusing the theories of Socrates and Georg Wilhelm Friedrich Hegel in the article, Wilson also tried to justify the sharp questions raised by British journalists. But the criterion for a piece of news is not its questioning style or form. It's all about authenticity. Some Western journalists in China regard themselves as acting as enlightening figures or even preachers. They first criticized China's so-called backwardness, and then forced China to accept Western standards.

Wilson then raised an old cliché: Chinese media can only report critically under conditions permitted by the Chinese government. She linked Chinese media's reports with the CPC's leadership of the media. However, the essential factor of news is authenticity, not who the media belongs to.

The CPC, with its achievements in a century, has proven that it seeks better lives for Chinese people and great unity for the world. Chinese media are affiliated with an advanced political party which is fair and square. Why has it become an original sin in some Western people's eyes?

Besides, don't Western media have political roles? Western media have obvious political inclinations and the UK is no exception. The number of people represented by a single party in the UK may not be as many as a large county in China, let alone representing the interests of the majority. As a media outlet funded by the British government, how can the BBC claim itself to be independent?

Wilson also said that international media can supervise Chinese government's acts. This is a typical disguised replacement of concept, claiming that the British media's malicious reports on China are supervision by public opinion. However, supervision by public opinion should promote unity and improve governance ability. It should not intensify conflicts or even subvert the government. Do Western media such as BBC use fake news and false information to supervise its own government or other countries?

The in-depth reports that have truly shaken Chinese society have all basically come from Chinese media. Wilson tried to teach Chinese people Western media's importance as the so-called fourth estate. But when facing the British government's neglect of duty and political stunts in the COVID-19 fight, why didn't British media exercise their right of government oversight?

Do international media hate China? It depends on their specific words and deeds. But does China hate international media? The answer is obvious. From historical figures including Edgar Parks Snow, Agnes Smedley to American political commentator Nathan Rich, the CPC and Chinese people have always been open to friendly and objective foreign media.

Unfortunately, there has always been arrogance in Western politicians and media when they observe China. Wilson may be proficient in Chinese and may use Vlog to interact with Chinese people, but this does not mean she really understands China. China has its own internal logic. Whether the West likes it or not, this logic has supported China's development and progress. A crude and fundamental smear against it is unfair, even absurd, in any case.