OPINIONS America's failure is about a lack of social responsibility

America's failure is about a lack of social responsibility

One of the saddest stories I've heard about the cold snap hitting the United States right now is about a friend of a friend in Wisconsin. This man has been struggling with addiction his entire life and instead of receiving proper care or counseling for the childhood trauma he endured, which happened while he grew up in court-sanctioned foster care, his probation officer, who he was assigned from another drug-related offense, worked to have him sent to jail after failing a mandatory drug test.

This happened at the exact wrong time. First of all, there is a global pandemic that disproportionately affects the immunocompromised and this man has AIDS as a result of his use of intravenous drugs. Second, there's a historic cold snap across the country that is quite literally killing people from exposure and he has nowhere to go.

Rather than keep the man in jail a bit longer, which is something the criminal justice system would apparently never have a problem with ordinarily, or find a safe shelter for him, he was sent into the cold. And of course he nearly froze to death. He is, as of the last time I heard about him, expected to lose several limbs and will be left permanently disabled for the rest of his life on top of the fact that he doesn't have medical insurance and will be tens of thousands of dollars in debt.

There are so many things to unbox here in this one story, so many data points for exactly what's wrong with America and many individual policy discussions. At the heart of it, however, society has failed this man. But his story is not a case of people not doing their job like they should, rather the case of a system that has been deliberately, methodically and predictably destroyed in order to advance certain interests.

Just look at recent events in the U.S., particularly the state of Texas. Experts have also long warned of climate change and, at the heart of it, Texas's power shortages can largely be attributed to this. Those in charge of the power grid avoided winterizing equipment because they saw it as too costly of an investment for a cold-weather contingency. Then what experts warned could happen did happen and much of the state's power generation sources went offline.

In fact, most of Texas operates on an independent power grid that was purposely sought to avoid federal regulations. Its isolation from other markets meant that during rare times of emergency such as this the state cannot draw from elsewhere, leaving 4.4 million customers without power at one point.

It also means that it can opt out of capacity market pricing, meaning that operators don't need to meet capacity for emergencies and can hike prices. It was reported that ERCOT North hub ratcheted prices per megawatt hour to $1,489.75 last Tuesday, compared to the 2020 annual average of $26, which forced poorer communities to shut the power off. 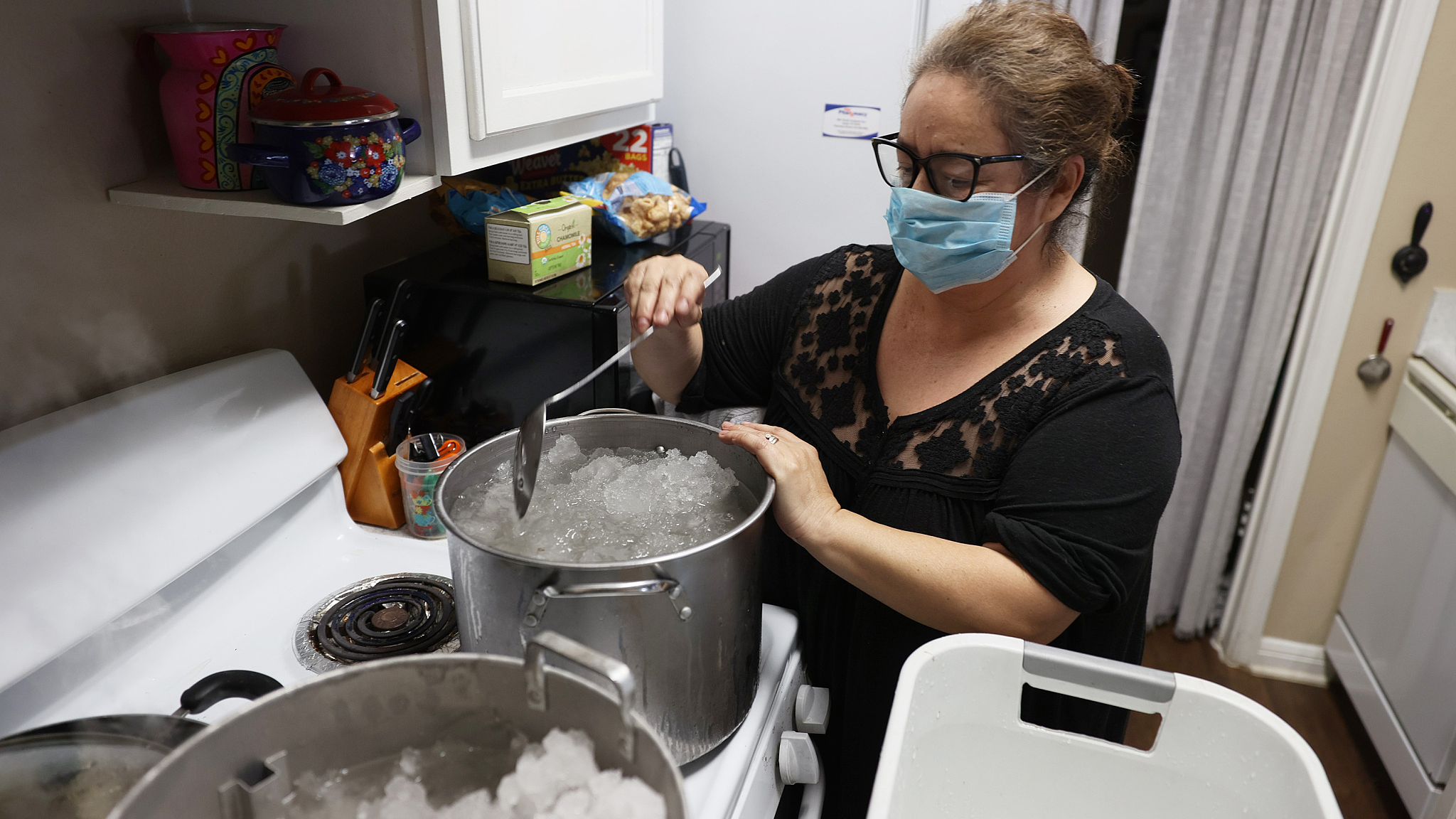 Marie Maybou melts snow on the kitchen stove to use the water to flush the toilets in her home after the city water stopped running in Austin, Texas, February 19, 2021. (Photo: CFP)

The response from some Texas officials has been shameful. One Texas mayor, Tim Boyd, said on Facebook, "No one owes you or your family anything; nor is it the local governments responsibility to support you during trying times like this! Sink or swim, it's your choice!"

He went on, "This is sadly a product of a socialist government where they feed people to believe that the few will work and others will become dependent for handouts."

Senator Ted Cruz of Texas, the avatar of personal responsibility, crossed the U.S.-Mexico border in search of safety (like so many thousands of other families) while his constituents were freezing, some even to death. When the public learned about his departure, he blamed his two pre-teen daughters (even though texts were leaked showing a different story).

The unbounded hypocrisy of these sorts of officials that represent one of America's two major political parties leaves average Americans in a nasty feedback loop of misery and resentment.

People like Boyd and Cruz seek elected office in order to purposely destroy public services, which they cynically call "socialism," then publicly shame those institutions – the ones they destroyed in the first place – for not working effectively to rile up even more distrust toward the "socialist" government.

Meanwhile, the federal government is over-funded to start wars and local governments are uncannily prepared to incarcerate people and no one in the Republican Party cries out about government overreach or "the deficit."

This is the cynical attitude that has been mainlined into public consciousness for so many decades that many Americans would be able to read the story of the Wisconsin man at the beginning of this column and blame him for the misery society could have but didn't want to shield him from.