OPINIONS American 'coercive diplomacy' makes a mess around the globe

American 'coercive diplomacy' makes a mess around the globe 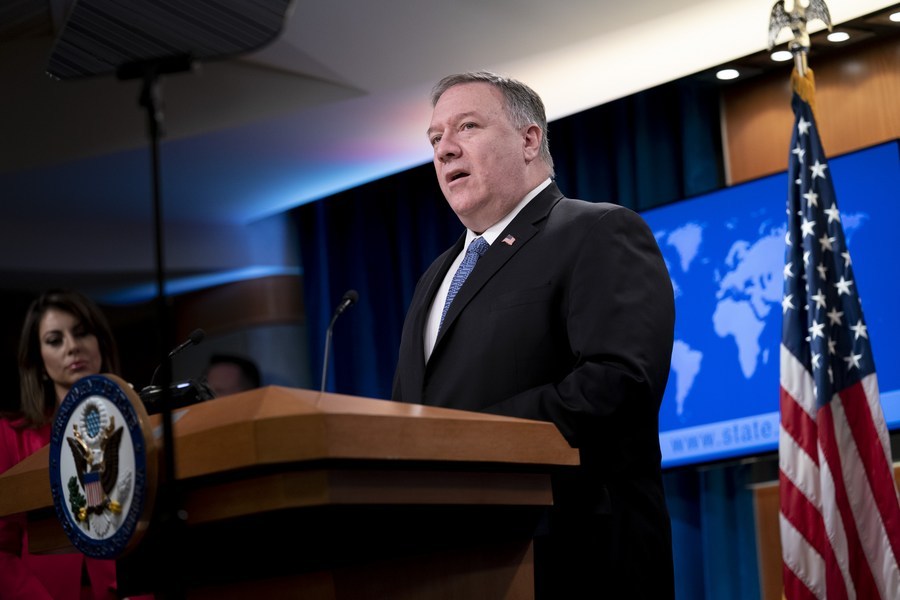 US Secretary of State Mike Pompeo (Front) speaks during a press briefing in Washington DC, the United States, on March 5, 2020. (Photo: Xinhua)

US Secretary of State Michael Pompeo said recently that countries around the world want to be allies of the US It is not that the whole world wants to be an ally of the US, but that Pompeo wants to be the "leader of the alliance," in an attempt to intimidate countries, including "allies" to become marionettes who act according to his will.

For some time, the head of the US diplomacy has traveled all over the world, sparing no effort to intimidate other countries to take sides and concoct the so-called “anti-China alliance” wherever he goes.

In order to crush Huawei, a private Chinese technology company, Pompeo has gone to great lengths to travel around Europe, using both high pressure and rich profits to reach his goal, playing "intimidation and inducement" to the extreme. As the Washington Post recently said, Pompeo did not hesitate to manipulate the US foreign policy in order to realize his political ambitions.

As a result, today's US diplomacy has been reduced to "coercive diplomacy,” making a mess around the globe.

In Europe, the US has repeatedly pressed its European allies to increase their military spending in order to withdraw a large number of American troops, leading German and French leaders to openly question the "ally" status of the US

In order to pressure the EU to make concessions, the US has been escalating the trade war with Europe, levying tariffs on European wine imports and putting destructive tariffs on European cars, all of which are aimed at the economic lifeline of Europe.

In the Middle East, the US blatantly asked the United Nations Security Council to extend the arms embargo against Iran, despite the fact that the country itself had already withdrawn from the Iranian nuclear agreement.

After the attempt was voted down by a large majority, the US has been slapped in the face by the UN and the international community for announcing without authorization "the restoration of United Nations sanctions on Iran.”

The US has also extended its reach to Latin America. From September 18 to 20, Pompeo made a whirlwind visit to Venezuela's four neighbors, Brazil, Guyana, Suriname and Colombia, lobbying the countries to work together with the US in taking a tougher stance against Venezuela.

This kind of "coercive diplomacy" combined with "sanctions diplomacy" and "deceitful diplomacy” constitutes the American "extreme hegemonic diplomacy" represented by Pompeo. These politicians insist on long-term and cruel sanctions against Cuba, Iran, Venezuela and other developing countries, making these countries even worse during the pandemic.

With the international community strongly urging the US to lift sanctions in order to fight the pandemic and save lives, Pompeo and American politicians with similar views, who are often endorsed as the "guardians of human rights," continued to exert pressure and use the pandemic to kill people.

This year marks the 75th anniversary of the founding of the United Nations. Pompeo and American politicians with similar views regard the UN Charter as nothing and the UN podium as their private place, repeatedly intimidating many member states, with President Donald Trump even making a seven-minute speech deemed a “nonsense” farce at the 75th anniversary conference of the UN.

In the United Nations, the US only wants privileges but has failed to fulfill its obligations, defaulting on its debts for a long time, and shirking its peacekeeping responsibilities, placing financial strain on the UN.

In order to cover up the responsibility for letting the epidemic get out of control, Pompeo and American politicians with similar views have not only discredited China, but have also repeatedly created difficulties for the World Health Organization. They cut off supplies and withdrew from the group efforts at a critical moment in the global fight against the pandemic, seriously threatening global public health security.

The justice and rules of the international community do not want to be threatened by the "fist" of the US On September 11, the 74th session of the UN General Assembly adopted a comprehensive resolution on COVID-19’s pandemic situation by 169 votes, overwhelming the US, which had only one supporter.

The US sought to restart the "rapid resumption of sanctions" mechanism against Iran, which was opposed by 13 out of the 15 members of the UN Security Council. Recently, nearly 50 scholars from Harvard University and other American universities issued a joint statement saying that US foreign policy is close to failure, causing instability, insecurity and human suffering.

The "coercive diplomacy" pursued by Pompeo and American politicians with similar views runs counter to the world trend of peace, equality, dialogue and cooperation, causing the most serious damage to the US diplomacy in decades.

The US, which is pursuing coercion, sanctions and bullying all over the world, has become a destroyer of world peace, a spoiler of the international order, and an enemy of human civilization.

What makes US politicians who engage in "coercive diplomacy" different from bullies?