OPINIONS American interventionism as a source of humanitarian crisis

American interventionism as a source of humanitarian crisis 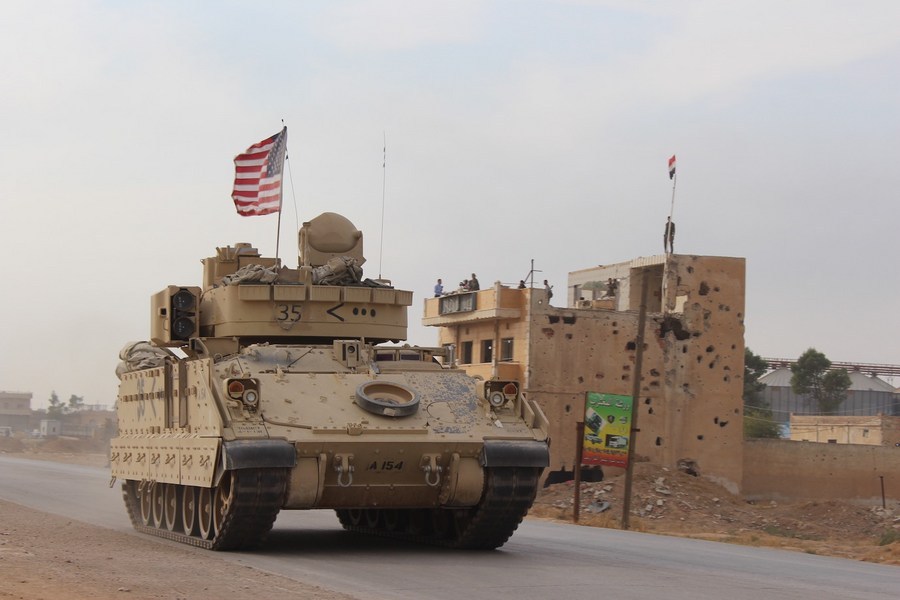 U.S. military vehicle is seen passing through the Tal Tamr area in the countryside of Hasakah Province in northeastern Syria on Nov. 14, 2019. (Xinhua File photo)

American interventionism has brought about multiple tragedies in the world, which is a stark reminder for us to remain extra vigilant against the erratic behavior and actions of the United States.

Since the end of the Cold War, the U.S. had launched a so-called "humanitarian intervention" in the Federal Republic of Yugoslavia, transformed other countries politically and socially under the so-called doctrine of "the responsibility to protect," instigated wars against other countries in the name of anti-terrorism, and grossly interfered in other countries' domestic affairs under the pretext of protecting democracy and human rights.

The interventionist actions of the U.S. has disturbed public order in countries and regions all around the world, many of which have led to a large number of civilian casualties and the mass exodus of local populations, as well as the occurrence of numerous tragedies and humanitarian disasters.

In the 1990s, American-led interference in the Federal Republic of Yugoslavia precipitated the outbreak of national and ethnic hostilities, triggering a series of vengeful confrontations in the region. Nearly 300,000 people died in the Bosnian War and the Kosovo War, while three million became refugees as a result of the armed conflict. After all the bloodshed, the Federal Republic of Yugoslavia ended up in an acrimonious break-up and disintegrated into several smaller and weaker countries.

The war initiated by the U.S. in Afghanistan, which has lasted 20 years from October 2001 up until today, has displaced 11 million people and has killed over 30,000 innocent civilians.

Meanwhile, the Iraq War launched by the U.S. in 2003, as well as the Syrian Civil War in which the Americans have played a major part, created a vacuum for incubating radicalized terrorist forces, most notoriously in the form of ISIS, while further fueling the outbreak of other incidental clashes in the Middle East, not to mention having led to a huge humanitarian tragedy in which over 200,000 civilians died and more than five million became homeless.

In the final analysis, all these interventionist actions of the U.S., disguised in mendacious excuses, have ended up causing severe humanitarian disasters in affected countries and regions.

The sustained war and chaos triggered by American interventionism have constantly compelled refugees to seek refuge in other countries and regions, exacerbating humanitarian disasters that were already a life-and-death situation for people on the ground. Most of the refugees in the Middle East and North Africa have sought refuge in Europe, while those in Latin America have flooded into the U.S. They have suffered from untold horrors while fleeing from their own countries, with many of them even having been separated from their families. A large number of refugees were rejected by their destination countries or put into detention facilities where their search for freedom fell on deaf ears.

However, life isn't easy for those who have made it to their host destinations, either. These refugees have often been discriminated against, excluded and attacked by local residents. Moreover, the social order in the communities that have received these foreign migrants are often characterized by chaos and an extreme sense of instability.

This has been the experience in Germany, which is today the largest refugee-hosting country in Europe. Receiving over 200,000 displaced people, the country is now suffering from severe economic and social impacts, and the German government has since been fiercely questioned for its handling of refugee-related issues. In Denmark and Sweden, direct conflict has erupted between local communities and refugee groups.

Successive refugee crises, brought on by America’s interventionist actions, have contributed in large part to undermining regional stability, with some developed countries that once espoused the value of human rights now being accused of disrespecting the human rights of incoming refugees. The stable and delicate social order in these countries that has been a feature of the past is now in great danger due to the flood of refugees from conflagrations abroad.

The ceaseless interventionist actions of the U.S. have placed the country itself into a deep humanitarian crisis. During the past two decades, military intervention has cost taxpayers in the country more than US$6 trillion, while the costs associated with clandestine activities, such as those in support of the so-called "Color Revolutions", have also added up to significant sums.

The U.S. is willing to spend huge amounts of money on interventions and military exercises overseas, many of which give rise to humanitarian disasters, but rarely assigns any of its discretionary spending on improving its race relations and the basic human rights of vulnerable groups living within its borders, let alone other measures to improve human rights conditions at home or abroad.

Political elites in the U.S., who are addicted to foreign intervention abroad and reluctant to improve the ability to govern at home, have become unwitting cheerleaders for a country that is now facing extreme and growing political, class and racial divides. Both the death toll wrought by the COVID-19 pandemic, which has taken the lives of 568,000 American citizens, and the emotive case of George Floyd, point to the fact that American interventionism will only come back to hurt the country itself in the end. It's a huge irony, therefore, that the U.S. has become a model for aiding others in times of humanitarian crisis.

In a word, the interventionist actions of the U.S. are of good to no one and instead serve as a source of humanitarian disaster and human rights violations. The U.S. may continue to take such rash actions in the future, but more and more countries have realized that they must work together to firmly say no to such interventions, in this way promoting stability and sustained order around the world.

(Li Haidong is a professor with the Institute of International Relations, China Foreign Affairs University.)