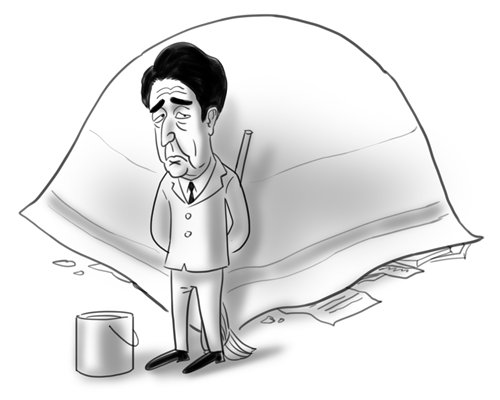 Since 2017, Japanese Prime Minister Shinzo Abe and his wife have been found embroiled in a cronyism scandal involving the cut-price sale of state land to a nationalist school operator in Osaka. Abe's efforts at a quiet coverup made some headway but took a sudden dark turn recently, undermining people's trust in him. On March 12, under outside pressure, the Finance Ministry admitted tampering with official documents to remove reference to the first lady, a serious offence. Amid the scandal, a finance official committed suicide earlier this month and other officials have resigned. Japanese politics was shocked and the huge stress that the Abe government faced was reflected in media polls on Sunday.Over the last weekend, Japan's Nippon TV poll found Abe's support crumbling some 14 percentage points from last month to 30 percent, the lowest in his more than five years in office. Respondents not supporting Abe jumped 16 points to 53 percent in the survey, also a record for the Nippon TV poll. The results, however, did not upset Abe. Unlike 2017, there is no election in 2018, therefore public concern is not likely to exert direct pressure on the ruling party. Nevertheless, from the history of the Liberal Democratic Party of Japan (LDP), it is difficult to say if Abe is used to changes or just pretends to be cool.Other media polls showed that the future is not bright for Abe to appear unconcerned. According to the Asahi Shimbun newspaper poll, more than 80 percent of respondents said Abe was responsible for altering documents, and 53 percent wanted him replaced. Such comments shame responsible politicians. What's more, some LDP supporters are likely to give up on Abe government - a bad sign for the Japanese leader. Actually, the spotlight in the scandal has moved from land sale to the doctoring of documents. The Asahi poll asked whether Finance Minister Taro Aso should resign because of altering state documents, and 50 percent said he should. Abe has chosen to support Aso out of political interest.This autumn, Japan will hold elections for the LDP leadership. Aso's group as well as the Hosoda faction is Abe's main supporters. As Aso is in media focus, it leaves Abe more maneuvering room to deal with the scandal. Aso came under fire for his remarks after the resignation of former National Tax Agency chief Nobuhisa Sagawa. Abe will be pushed to the front if Aso resigns. Hence, Abe will not sideline Aso easily. Although there is no general election this year, it doesn't mean Abe can snub public pressure. After all, to achieve his policy goal of changing the pacifist Japanese constitution, he will need more than half of citizens to support him. As the opposition party is in minority in the parliament, it is hard to shake the Abe government with outside pressure. There may be internal challenges to revise the constitution from the party itself before the leadership race. That Abe gets trapped in the scandal gives opportunities to Abe's rivals. If public disappointment hurts the chances of amending the constitution, I believe Abe's rivals will not waste the chance to replace him.