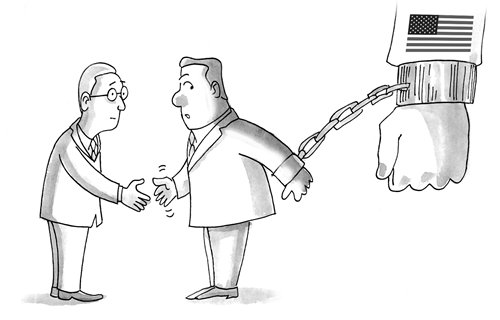 In his policy speech to both houses of the Diet on Monday, Japanese Prime Minister Shinzo Abe said Japan "will cooperate with China to meet rising Asian infrastructure demand" under its free and open Indo-Pacific strategy.Abe added that Japan and China bear great responsibility for regional peace and prosperity and share an inseparable relationship, and hence Tokyo will "steadily improve our friendship from a comprehensive standpoint." He stressed that as this year marks the 40th anniversary of the signing of the Treaty of Peace and Friendship between Japan and China, Japan will intensify people-to-people exchanges with China at various levels.Many Chinese scholars believe that Abe's speech highlights his intention to continue to improve ties with China. His attitude toward Beijing has become increasingly clear since mid-2017, and has contributed to the improvement of the bilateral political atmosphere.However, the two countries still have diplomatic disputes. Japan's Maritime Self-Defense Force ships had earlier sailed near the Diaoyu Islands, and were surveilled by Chinese vessels.In addition, Tokyo is the most active in pushing the Indo-Pacific strategy and the quadrilateral dialogue between the US, Japan, Australia and India. All this has deepened mutual distrust between Beijing and Tokyo.It seems that the Abe government is sincere in enhancing ties with China, but there's no suspense that Japan will continue its tough stance on Beijing-related matters.Washington's ambiguous attitude toward Tokyo has, to some extent, contributed to Abe's determination to improve ties with Beijing. This indicates that there will be a bumpy road ahead for Sino-Japanese ties.Objectively, future bilateral relations will, on the one hand, focus on trade and economic cooperation, and on the other, be in a state of flux because of bilateral disputes and external interference from, for instance, the US.China should encourage the improvement in Sino-Japanese ties and stick to its principles in addressing bilateral conflicts. We should encourage every positive sign by Tokyo to enhance ties, make no concessions over its mistakes and try not to overplay the effects of the bilateral disputes. Then the two countries can gradually accumulate mutual trust and goodwill for substantial improvement in relations, as long as Japan has the real intention to deepen ties with China and doesn't want bilateral relations to be affected by rows.Both Chinese and Japanese societies are aware that the two countries will benefit from peaceful coexistence and lose from conflicts. Washington is the biggest beneficiary of Beijing-Tokyo antagonism. The US intends to intensify its strategic rivalry with China, and therefore wants Japan to play the role of its loyal ally to counter China. This will be perilous for both China and Japan.The alleviation of tensions in Sino-Japanese relations conforms to the interests of both Beijing and Tokyo. The two countries should try to ease tensions over strategic issues. To begin with, China and Japan should rule out the possibility of a military clash. This means that the East China Sea dispute should be brought under control. Moreover, the two states should try to reverse the downward trend in bilateral trade and push to boost economic cooperation. At present, China's GDP is about three times that of Japan. The two countries should adapt to this historic reality. While Japan should adapt to China's rise, China needs to change its mind-set as a victim of history. In fact, the two countries have no major disputes and can become partners for a bright joint future.