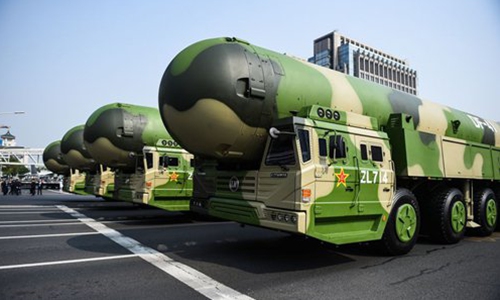 A formation of Dongfeng-41 intercontinental strategic nuclear missiles takes part in a military parade celebrating the 70th anniversary of the founding of the People's Republic of China in Beijing, capital of China, October 1, 2019. (Photo: Xinhua)

I welcome the criticism of my call for China to expand the number of its nuclear warheads. Here is my response to those criticisms.

First, to advocate that China increase the number of nuclear weapons is itself anti-peace. Some people holding this view are idealistic and have a complete aversion to nuclear weapons. Of course, it cannot be ruled out that others, whose positions and feelings are not in line with China's national security interests, will stand against it. In addition, some people say that the money for building nuclear weapons should be used to improve people's livelihood and alleviate poverty. I think it's difficult to talk to them. Just let them vent their emotion.

Second, the number of nuclear weapons China needs to keep must be strictly calculated. My advocacy is not based on professional knowledge. I am not an expert in this area. But it is too narrow to think that only arms control experts can talk about nuclear weapons. The game between China and the US is a matter between two big societies. Nuclear deterrence should shape not only the attitude of the other side's military, but also the psychology of the other side's political, economic and opinion circles, and the national will of the other side as a whole. I am no less knowledgeable about the will of the state than an arms control expert. I mean, obviously, I have a right to participate in this discussion.

Third, China's nuclear deterrent is an ambiguous strategy and I should not spell out how many nuclear weapons China needs. In fact, over 1,000 nuclear warheads and at least 100 DF-41 ICBMs that I mentioned are not exact number, but the concept of magnitude. There are both people who agree and disagree with me, and China's ambiguous strategy of nuclear deterrence has not become "clear" because of my post. China is already defined by the US as a major strategic competitor. If the US continues to believe with certainty that China has only a few hundred nuclear warheads, it will be dangerous for China.

China does not need to engage in an arms race with the US, but as Washington's strategic will to crush Beijing grows, so must our nuclear deterrence. Whatever calculation model is used to figure out how many nuclear warheads China needs, this common-sense logic needs to be the basis of all of them.

Fourth, even if China wants to expand its nuclear arsenal, it should just do it and say nothing. China should not make a big noise about it, and I agree. China could quietly increase nuclear warheads in certain phases, but I objected doing that for a long time. Nuclear weapons are for deterrence. If they're completely concealed, what do you need them for? At the Tiananmen military parade, the strategic missile part is the one that attracts the most attention every time, and that is what it shows to the outside world.

Finally, I would like to say that my gut feeling is that China will increase its nuclear warheads, and I believe this is also the gut feeling of many people. Because China actually has no choice.