Editor's note: Lin Songtian, Chinese Ambassador to South Africa, published an article on three influential South African newspapers including The Star, Pretoria News and Business Day on Friday. Here is the full text of the article. 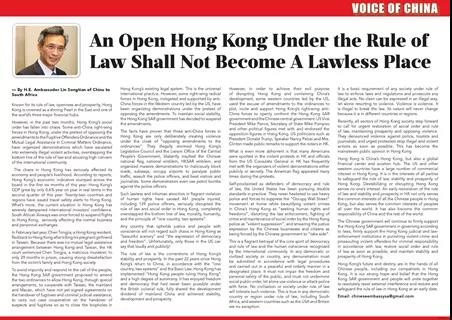 (Photo: Screenshot of the article)

Known for its rule of law, openness and prosperity, Hong Kong is crowned as a shining Pearl in the East and one of the world's three major financial hubs.

However, in the past two months, Hong Kong's social order has fallen into chaos. Some anti-China right-wing forces in Hong Kong, under the pretext of opposing the amendments to the Fugitive Offenders Ordinance and the Mutual Legal Assistance in Criminal Matters Ordinance, have organized demonstrations which have escalated into extremely illegal violent activities, overstepping the bottom line of the rule of law and arousing high concern of the international community.

The chaos in Hong Kong has seriously affected its economy and people's livelihood. According to reports, Hong Kong's economic indicators slumped across the board in the first six months of this year. Hong Kong's GDP grew by only 0.6% year on year in real terms in the second quarter of this year. Twenty-two countries and regions have issued travel safety alerts to Hong Kong. What's more, the current situation in Hong Kong has severely dampened international investors' confidence. South African Airways was once forced to suspend flights to Hong Kong, seriously affecting the normal business and personnel exchanges.

In February last year, Chen Tongjia, a Hong Kong resident, fled back to Hong Kong after killing his pregnant girlfriend in Taiwan. Because there was no mutual legal assistance arrangement between Hong Kong and Taiwan, the HK court sentenced Chen Tongjia, a malicious murderer, to only 29 months in prison, causing strong dissatisfaction from the victim's family and Hong Kong society.

To avoid impunity and respond to the call of the people, the Hong Kong SAR government proposed to amend the two ordinances to allow Hong Kong, through special arrangements, to cooperate with Taiwan, the mainland and Macao, which have not yet signed agreements on the handover of fugitives and criminal judicial assistance, to carry out case cooperation on the handover of suspects and fugitives so as to close the loopholes in Hong Kong's existing legal system. This is the universal international practice. However, some right-wing radical forces in Hong Kong, instigated and supported by anti-China forces in the Western country led by the US, have been organizing demonstrations under the pretext of opposing the amendments. To maintain social stability, the Hong Kong SAR government has decided to suspend the amendments.

The facts have proven that those anti-China forces in Hong Kong are only deliberately creating violence under the cloak of "opposing amendments to the ordinances". They illegally stormed Hong Kong's Legislative Council and the Liaison Office of the Central People's Government, blatantly insulted the Chinese national flag, national emblem, HKSAR emblem, and organized massive demonstrations to maliciously block roads, subways, occupy airports to paralyze public traffic, assault the police officers, and beat visitors and journalists. Some demonstrators even use petrol bombs against the police officers.

Such lawless and inhuman atrocities in flagrant violation of human rights have caused 461 people injured, including 139 police officers, seriously disrupted the rule of law and social order in Hong Kong, completely overstepped the bottom line of law, morality, humanity, and the principle of "one country, two systems".

Any country that upholds justice and people with conscience will not regard such chaos in Hong Kong as "beautiful scenery" and "the expression of democracy and freedom". Unfortunately, only those in the US can say that loudly and publicly!

The rule of law is the cornerstone of Hong Kong's stability and prosperity. In the past 22 years since Hong Kong’s return to China, in accordance with the "one country, two systems" and the Basic Law, Hong Kong has implemented "Hong Kong people ruling Hong Kong" and a high degree of autonomy. It has enjoyed freedom and democracy that had never been possible under the British colonial rule, fully shared the development dividend of mainland China and achieved stability, development and prosperity.

However, in order to achieve their evil purpose of disrupting Hong Kong and containing China's development, some western countries led by the US, used the excuse of amendments to the ordinances to plot, incite and support Hong Kong's right-wing anti-China forces to openly confront the Hong Kong SAR government and the Chinese central government. US Vice President Mike Pence, Secretary of State Mike Pompeo and other political figures met with and endorsed the opposition figures in Hong Kong. US politicians such as President Donald Trump, Speaker Nancy Pelosi and Mrs. Clinton made public remarks to support the rioters in HK.

What is even more abhorrent is that many Americans were spotted in the violent protests in HK and officials from the US Consulate General in HK has frequently met with the organizers of violent demonstrations either publicly or secretly. The American flag appeared many times during the protests.

Self-proclaimed as defenders of democracy and rule of law, the United States has been pursuing double standards in practice. They never hesitated to use heavy police and forces to suppress the "Occupy Wall Street" movement at home while beautifying violent crimes in China’s Hong Kong as "seeking human rights and freedoms", distorting the law enforcement, fighting of crime and maintenance of social order by the Hong Kong police as "violent suppression", and smearing the justice expression by the Chinese businesses and citizens as being forced by the Chinese government to "take side".

This is a flagrant betrayal of the core spirit of democracy and rule of law and the human conscience recognized by the international community. In any democratic or civilized society or country, any demonstration must be submitted in accordance with legal procedures and carried out in a peaceful and orderly manner in a designated place. It must not impair the freedom and personal safety of the public, and must not undermine social public order, let alone use violence or attack police with force. No civilization or society under rule of law will tolerate such violence. This is true in any democratic country or region under rule of law, including South Africa, and western countries such as the USA and Britain are no exception.

It is a basic requirement of any society under rule of law to enforce laws and regulations and prosecute any illegal acts. No claim can be expressed in an illegal way, let alone resorting to violence. Violence is violence. It is illegal to break the law. Its nature will never change because it is in different countries or regions.

Recently, all sectors of Hong Kong society step forward to call for urgent restoration of social order and rule of law, maintaining prosperity and opposing violence. They denounced violence against police, tourists and journalists, and urged protesters stop illegal and violent actions as soon as possible. This has become the mainstream public opinion in Hong Kong.

Hong Kong is China's Hong Kong, but also a global financial center and aviation hub. The US and other western countries have a large number of commercial interest in Hong Kong. It is in the interests of all parties to safeguard the rule of law, stability and prosperity of Hong Kong. Destabilizing or disrupting Hong Kong serves no one’s interest. An early restoration of the rule of law and stability and prosperity in HK not only serves the common interests of all the Chinese people in Hong Kong, but also serves the common interests of peoples all over the world. It has also become the common responsibility of China and the rest of the world.

The Chinese government will continue to firmly support the Hong Kong SAR government in governing according to laws, firmly support the Hong Kong judicial and law-enforcement institutions in punishing violent crime and prosecuting violent offenders for criminal responsibility in accordance with law, restore social order and rule of law as soon as possible, and maintain stability and prosperity of Hong Kong.

Hong Kong's future and destiny are in the hands of all Chinese people, including our compatriots in Hong Kong. It is our strong hope and belief that the Hong Kong SAR government and people will unite together to resolutely resist external interference and restore and safeguard the rule of law in Hong Kong at an early date.