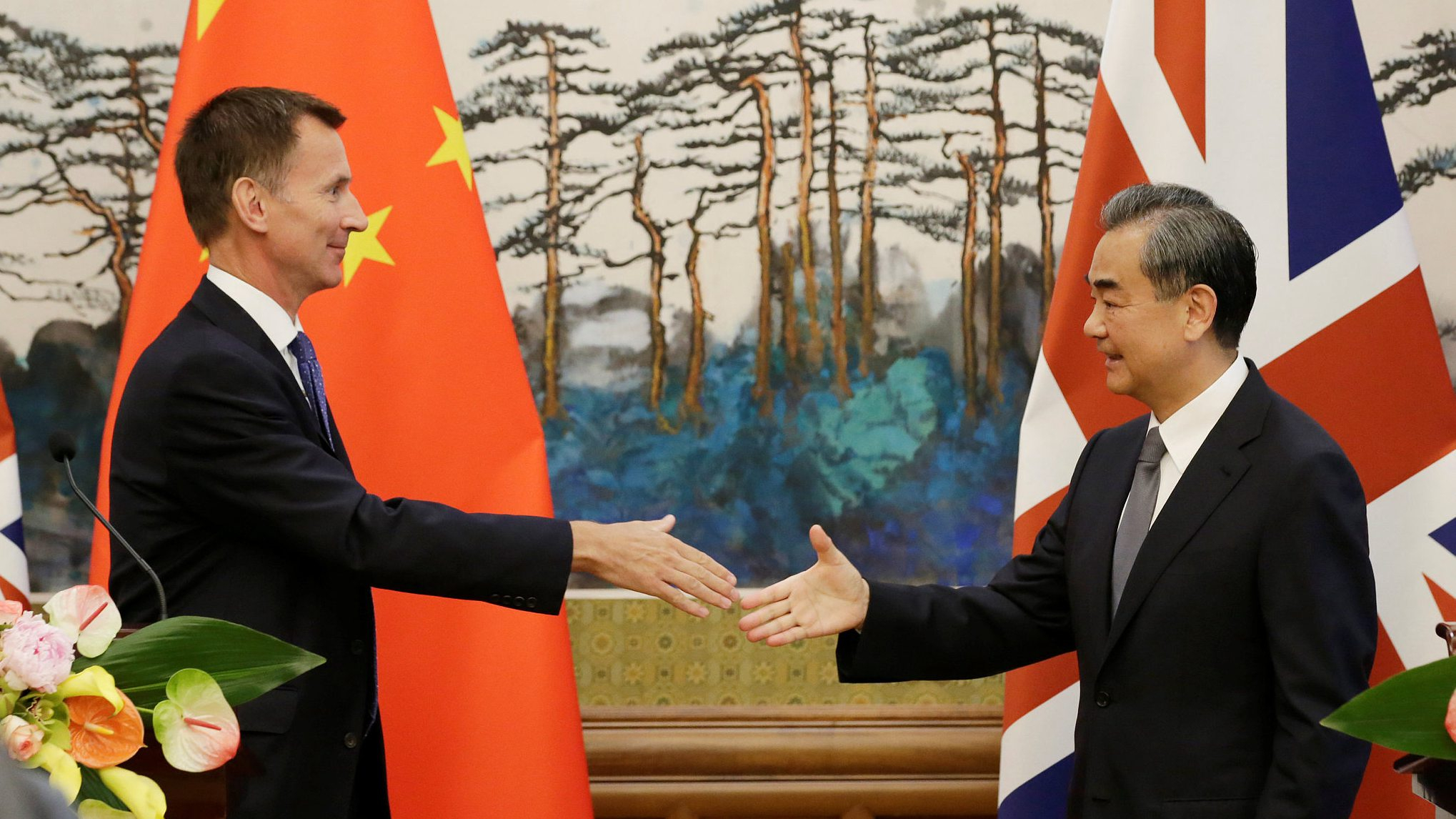 “The timing of Jeremy Hunt’s visit shows the significance of the relationship between China and the UK for the UK’s economy. As we know that the UK is an open economy, so, the international environment is very important for it,” said Liu Mingli, the deputy director of Institute of European Studies, at China Institutes of Contemporary International Relations, in speaking with CGTN.

“But for the time being, the situation is not very good. Donald Trump just visited the UK a couple of days ago, and it seems that President Trump is not welcome in the UK. And the US doesn't provide a promising future for the possible bilateral FTA negotiations, and for the European Union, although the EU and US just made an announcement about future trade cooperation. But I don’t find an agreement with details, which means UK’s international environment is not secure, either with EU or with the United States.”

During British Prime Minister Theresa May’s visit to China in January, both sides agreed to advance their relations to a higher level, described as the “Golden Era”, Theresa May also invited Premier Li to visit her country early next year. Meanwhile, UK plans to send a high-level delegation to China’s first international Import Expo in Shanghai this fall.

For the relationship between China and UK, Liu thinks that it has entered the“Golden Era”, and is becoming more and more important for both the UK and China.

China-UK trade and investment saw robust growth recently. According to statistics from HM Revenue & Customs of the UK, the country's total export to China reached 5.7 billion US dollars in the first quarter of 2018. That's an 8.1 percent increase year-on-year.

However, for the UK, the international environment is not as good as it had expected, given the trade war Donald Trump has launched with China, particularly during the process of Brexit.

“UK’s businesses in China have not been largely affected so far, however, in the long-run, UK, as the No.5 or No.6 largest economy in the world, could not avoid being affected by Donald Trump’s protectionism policy, because it is just the beginning of trade tensions between China and the United States,” Liu said.

“In the long run, if the Trump administration keeps its protectionism policy, the Chinese economy will be affected, and UK’s economy will also be affected directly. Therefore, UK businesses in China will suffer from US policies and the US market, as many of them are export-oriented.”

The UK wants to strike a deal with major economies, including the United States. But during President Trump’s visit in the UK, the US doesn’t show a lot of willingness to strike a bilateral FTA with the UK, because the US doesn’t want to make any concessions on FTA talk, as Trump still keeps America first, even the special relationship between US and UK was weakened. So, a trade deal between the US and EU will probably not be made soon.

In Liu’s opinion, this has provided many trade opportunities for both China and UK, because China is expanding its opening up and reform in its economy and UK is a financial center, it has a lot of advantages in the financial sector. This means more UK financial enterprises can invest in China, and they will benefit from the huge market.

Given the rising trend of anti-globalization, Wang Yi and Jeremy Hunt agreed that it is of vital importance for both China and the UK to make joint efforts in upholding rules-based international order, as well as solving regional issues.

The “Golden Era” between China and the UK has come, and more cooperation can be expected in the near future.