OPINIONS Andrew Yang and the reason US jobs are disappearing

Andrew Yang and the reason US jobs are disappearing

Andrew Yang spoke less than anyone else in the latest Democratic primary debate, but he did land a few zingers. When asked what he would say in his first phone call with Russian President Vladimir Putin were he elected president, he responded, "I'm sorry I beat your guy." 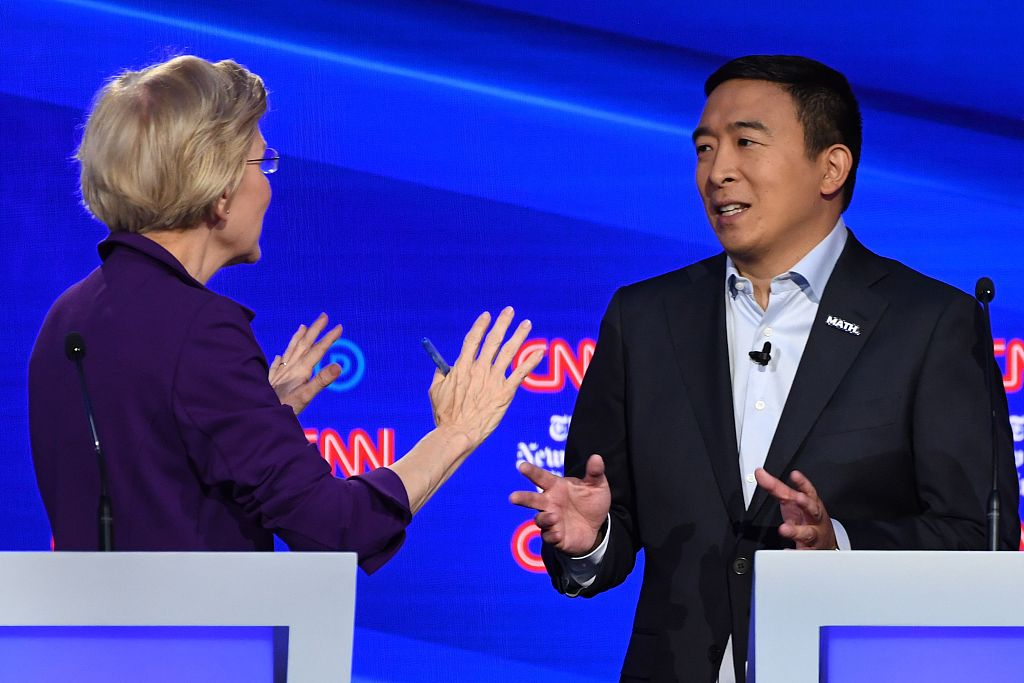 His goofy humor also drew some attention earlier this year when he challenged President Donald Trump to a contest in anything.

"What could Donald Trump possibly be better than me at? An eating contest?" He added that "Trump might be able to beat me at golf, though I'm told he cheats a lot, so who knows what his true golf ability is."

Yang, a successful Silicon Valley entrepreneur, was initially seen as a kind of novelty candidate, and his idea of a "Freedom Dividend" of 1,000 U.S. dollars a month for every American was largely viewed as a kind of gimmick.

However, he has outlasted two governors, two senators, and a big city mayor. He raised a healthy 10 million U.S. dollars in the third quarter and has hired Bernie Sanders' former ad agency.

He continues qualifying for Democratic debates, and he is sandwiched between the top tier and bottom tier of candidates in both polling and fundraising.

His candidacy gained traction from his appearances on a series of podcasts, which allowed him the space to get past his gimmicks and soundbites and explain his ideas at length. So what does Yang stand for, and why should China be interested?

The reason Yang resonates with voters is his analysis of why Donald Trump won the last election — and the reason is not Russian interference or jobs stolen by China.

Earlier this month, he published an op-ed piece in the New York Times, entitled, "Yes, Robots Are Stealing Your Job."

In it, he said, "Around five million manufacturing jobs have been lost since 2000, with automation being a main factor. Many of those jobs were in Ohio, Michigan, Pennsylvania, Wisconsin, and Iowa — states that swung to Donald Trump in 2016."

Yang is warning the public that as wealth pools in the hands of very few people, people's livelihoods are inevitably going to be lost. His Freedom Dividend, or universal basic income scheme, is a plan to give 1,000 U.S. dollars to each American to provide a safety net that allows people to move to an area with better economic prospects, start a business, care for a relative, and so on.

He wrote, "According to the Council of Economic Advisers in 2016, 83 percent of jobs paying less than 20 U.S. dollars per hour could have substantial parts of their work given over to automation. And advanced degrees won't protect you from this threat — doctors, accountants, and even lawyers face the same risk."

As you might expect from a Silicon Valley guy, his message is perfectly demographically tailored to appeal to people in the states that Trump won.

A large amount of data shows that the U.S. is splitting into two economies, and the divide closely maps voting patterns.

For example, Jed Kolko of the New York Times recently wrote that Democratic metropolitan areas have "a more favorable job mix for the future, with fewer manufacturing jobs, a higher share of harder-to-automate 'non-routine' jobs, and a higher share of jobs in occupations projected to grow faster."

While its true millions of manufacturing jobs have shifted to China from the U.S. as a result of globalization, the bigger picture is that these jobs are doomed anyway. How many jobs are there for loom operators, horse and buggy drivers, and fax machine repairmen these days? The forces at work in the United States will certainly take hold in other parts of the world as well.

Labor prices in China have increased to the point where some factories are moving to cheaper locations such as Vietnam and Bangladesh, and others are automating their assembly lines.

Whether or not Yang ends up as president, the issues he raises are substantive and won't go away.

Some people argue that job losses due to advances in technology has been constant since the industrial revolution, but nonetheless people have always found newer and more productive things to do.

But as Yang points out, it is hard to imagine that the 3.5 million truck drivers who will soon be out of jobs will become computer coders or lead start-up companies.

Yang said recently, "Anyone who underestimates this campaign is going to look dumber and dumber over time."

The same is true about anyone who ignores the underlying issues Yang is focusing on.