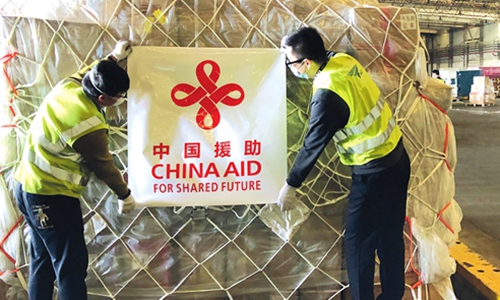 Workers place a banner reading "China Aid" on supplies which are to be loaded into an Air China 747-400 cargo plane at Shanghai Pudong International Airport on April 6 to Accra, Ghana. The 37.3 tons of supplies are part of China's aid to African countries to confront the COVID-19 pandemic. (Photo: Global Times)

Some foreigners have been involved in Guangzhou's epidemic prevention and control, and there has been friction between China's grassroots personnel and some African people. Officials in Nigeria and other countries have expressed their concerns and dissatisfaction, and the African Union has responded as well. Both the US media and government have participated in the hyping of the issue and spreading false information, vigorously provoking China-Africa relations.

At present, the COVID-19 pandemic is raging across the world and China is facing huge pressure to prevent imported cases. Among the foreign imported cases in Guangzhou, Nigerians and people from some other African countries account for a large proportion. There have also been local transmissions through those imported cases. This will inevitably cause the concern of China's grassroots prevention and control personnel and ordinary people.

However, the basic regulation for prevention and control are equal for everyone. Its only purpose is to protect the safety of the city. In the past, China formulated different prevention and control standards for people from different countries, mainly different quarantine and medical observation regulations. With the tightening global pandemic situation, the regulation has become almost equal for all people. In the past, some of those entering China from African countries were not included in the scope of centralized quarantine. But now, management toward them has tightened.

All foreigners, including Africans, must respect and cooperate with the strengthened prevention and control measures in Guangzhou. There is no bargaining. The prevention and control measures of local residents are very strict across China. Some foreigners feel that they are "discriminated," but they are in fact being treated the same way as Chinese people. They need to adapt to the situation and strictly abide by the regulations, instead of complaining and disobeying.

Some US media outlets have said Chinese people are "discriminating" against Africans and have portrayed it as a prevailing attitude of Chinese society towards Africans. Their act is malicious.

Gaps between nations and races can be found around the world, especially in the US.

Amid the pandemic, ordinary people always tend to be more vigilant to the high-risk groups. This should not be exaggerated. Since the coronavirus outbreak, many Wuhan citizens have been distanced in various places throughout China. For example, some were refused when checking into hotels. This is largely a natural response and has nothing to do with discrimination.

As Guangzhou has seen a relatively large number of imported cases from Africa, people there are feeling a sense of vigilance. Both Chinese and Africans living in Guangzhou should show more tolerance and not exacerbate the problem.

There are also a considerable number of Africans that stay illegally in Guangzhou, which has increased the difficulties for local prevention and control work. China has succeeded in containing the epidemic because social distance has been maintained and epidemiological investigations carefully organized. But some foreigners are unwilling to cooperate in China's efforts and want to seek personal privileges. This has greatly complicated the prevention and control work in the city.

Preventing imported infections is now a top priority in China. It's a bottom line that we should resolutely enforce all prevention and control measures regardless of the nationality and race of travelers entering China. All inbound foreigners understand this and do not seek any personal privileges.

It's also hoped the Chinese public could remain calm. Most African countries are friendly to China, and the US and other Western countries jealous of China-Africa relations have long been hoping to drive a wedge between China and Africa. China should adhere to principles, make our African friends adapt to the special measures we take during this critical period and minimize the chance that the US and the West could exploit to sow discord.