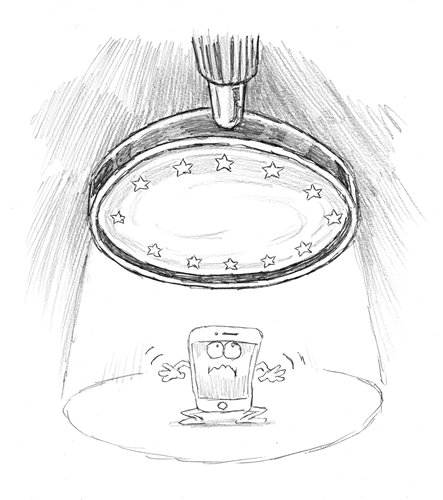 Germany's competition regulator, the Federal Cartel Office, is considering possible sanctions against US social media giant Facebook for abusing its dominant position, German newspaper Rheinische Post reported on Tuesday.According to the German antitrust authorities, the US company collects users' data not only from its own website but also from third-party sources such as Instagram and Whatsapp, without letting users know or consent to how the data is gathered and used. In a preliminary finding in mid-December, the Federal Cartel Office also found that Facebook occupied a dominant market position in Germany, thus restricting users' choice to either accepting the entire agreement or not using its network.It is not the first time Facebook has been investigated by European regulators, nor will it likely be the last. Actually, leading technology companies such as Google and Facebook have already faced regulatory investigations in Europe involving violations of anti-monopoly or user privacy laws. In June 2017, EU antitrust regulators fined Google a record 2.42 billion euros ($2.91 billion) for abusing its market dominance to give an illegal advantage to its online shopping service.While some of the cases have raised controversial academic and policy questions, it is clear that European regulators are increasingly inclined to put internet-related businesses under tighter scrutiny. This is a trend China should follow, given its permissive regulatory climate for the domestic internet industry. In China, it is not even a question whether a company collects users' data in the same way as Facebook does, and it is also unthinkable that Chinese regulators would bother to investigate or issue a warning about such behavior. Generally speaking, the contrast reflects the difference in regulatory standards for the digital area between China and other countries.The purpose behind the Western antitrust efforts is to regulate the market to encourage competition, with the ultimate goal of protecting consumers. While digitalization has brought great benefits to our lives, there is a growing awareness of the hidden risks it may generate. Regulators in developed countries are increasingly concerned about the ever-growing influence of these internet giants in the digital economy. Investigations into privacy violations or monopoly problems are what regulators can do to safeguard competition.Such regulatory pressure has had an impact. In the Facebook case, Germany's cartel office accused Facebook of abusing its market dominance, but the company denied that it was dominant. As of the end of September 2017, the company had about 32 million monthly active users in Germany, accounting for about 8.8 percent of the total users in Europe.The figure is insignificant compared with WeChat's number of users and market share in China. Moreover, recent media reports have said that one Chinese city will link residents' national identity cards to WeChat, which would be unimaginable in terms of antitrust laws and privacy protection for a Western company.China's regulatory environment for internet companies is lax. This may have something to do with the government efforts to promote innovation. Internet companies in China are subject to strict regulation and penalties only after something goes wrong with their business, such as the stringent oversight of the internet finance business these days. No one would bother to ask whether it's an abuse of market dominance when internet giants in China collect users' data. Users need to agree to all of the terms to use these services, but the issue is that the services are dominant in the market and users basically have no other choice.So how do we understand the regulatory difference? The development of China's regulatory climate may share certain similarities to its economic development. The Chinese economy used to be based on the so-called extensive growth model with high pollution, high energy use and rapid growth. But as the economy settles into a new normal stage, it is necessary for us to transform the old model to improve the quality of economic growth. The same is true of China's internet sector. The reason why China's internet industry can grow faster than that in the rest of the world is because the sector is undergoing unrestrained growth. But one day, the internet sector will reach its own "new normal" and Chinese regulators will tighten their reins.Some may reckon domestic regulations and implementation have yet to be on the same level as Western nations in the area of antitrust and privacy protection, but more is involved than just regulation. Amid concerns over the negative impact of strict regulation on innovation, Chinese regulators are wary of reining in the internet. More pressure is needed from the public to support tighter internet regulation.Antitrust enforcement isn't meant to hinder innovation but to safeguard it by encouraging competition. Without competition, the same major players may still dominate the Chinese market in a decade, and then how can they compete with global players in terms of innovation?