OPINIONS Are EU, Japan siding with US on trade war with China?

Are EU, Japan siding with US on trade war with China? 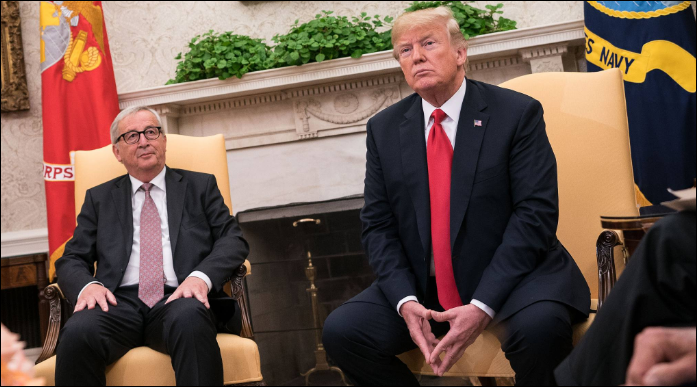 US President Donald Trump meets with President of the European Commission Jean-Claude Juncker, in the Oval Office at the White House in Washington, DC, July 25, 2018.(Photo: VCG)

"There is an apparent difference between the EU, Japan, and US positions," said Zhao Hai, research fellow at the Chinese Academy of Social Sciences. "The EU and Japan are putting one foot in the US boat and putting another in the Chinese boat. They want to take advantage of both and avoid downsides from both."

His comments came after trade ministers of the US, Japan, and the EU released a joint statement on September 25, where they voiced concern with non-market-oriented policies and practices of third countries, agreed on the need to reform the WTO, promote digital trade and e-commerce, and also to cooperate on a range of issues.

The joint statement targeted China in every way without directly naming the country. Instead, the statement used the term "third countries."

However, these three parties have also been locked in their own trade disputes with the US.

"The EU and Japan also have trade frictions with the US in the auto, agricultural and a number of other areas," said Zhao. Thus, he believes these two parties also want to cooperate with China in defending the free trade system against America's protectionism.

On the other hand, Zhao noted that the statement also indicates a certain degree of compromise from the EU and Japanese side.

"In terms of this joint statement, interestingly, they didn't mention reciprocity, which is the American word... they talked about fair trade and also a mutually beneficial arrangement between the countries and particularly within the WTO system. So I think that's EU and Japan's efforts trying to bring the US back into multilateral mechanisms so that they can work together."