OPINIONS Arms sale to Taiwan to result in soured ties

Arms sale to Taiwan to result in soured ties 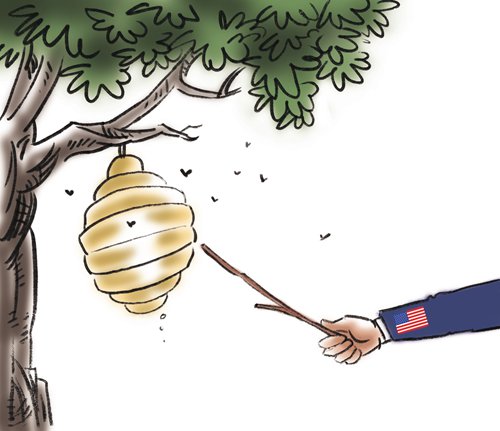 The Pentagon said on Monday that the US State Department has approved the possible sale of spare parts for F-16 fighters and other military planes worth up to $330 million to Taiwan, which follows $1.42 billion sales to the island approved by President Donald Trump in June last year. The moves violate the one-China principle and the three Joint Communiqués issued by China and the US, a collection of joint statements made by the two countries in 1972, 1978 and 1982.

For a long time, the US has been using arms sales to Taiwan as an approach to meddling in the Taiwan question, unilaterally believing that such sales can boost Taiwan's defensive capability and balance the military strength between the two sides of the Taiwan Straits.

Since 1979 every US government has sold arms to Taiwan, damaging China-US ties. The reasons behind the arms sales are complicated. They include the lobbying efforts from Taiwan side, the interests of US military enterprises as well as the changed situation of Beijing-Washington relations.

Not long after he took office, Trump was quite reckless when it came to the Taiwan question. He said that the one-China policy could be a tradable good in all China-US deals. This approach could fundamentally shatter bilateral ties. Amid the Chinese government's strong protest and active negotiations, Washington agreed to honor the one-China policy after previously placing it in doubt. But Washington continues to make trouble on the Taiwan question. In March this year, Trump signed the Taiwan Travel Act into law, which will break the restrictions on US officials' visits to Taiwan and increase US interference in the Taiwan question.

The proposed $330 million sale is not a big sum compared with previous deals, but it comes with unusual symbolic significance. Amid a deteriora­tion in Sino-US relations and cross-Straits relations, the arms sale to Taiwan will definitely aggravate tensions. If the contradictions between China and the US concerning military affairs and the Taiwan question continue to deepen, it will to some extent damage bilateral ties. Meanwhile, trade friction between the two countries will become increasingly hard to resolve.

Adopting a risky attitude toward the Taiwan question, the Trump administration is still well aware of the red line. Washington is consciously exercising restraint in its arms sales to Taiwan without selling the advanced weapons which the island demanded. Yet persistent lobbying efforts by Taiwan, constant requests from US military enterprises and unceasing hype by the US Congress are also prompting the Trump administration to sell arms to Taiwan.

The harm of the Trump administration's Taiwan policy lies in a miscalculation of playing the Taiwan card that will likely cause great damage to Sino-US relations. As a businessman-turned president, Trump is a veteran negotiator, who tends to combine different issues together on the negotiating table. If he wants to pressure China on trade friction through the Taiwan card, that approach won't work. Taiwan is a core interest of China. The Chinese government will spare no effort in safeguarding it. The US should be aware that if Washington overplays the Taiwan card, the Sino-US relationship may suffer heavily.

As far as cross-Straits relations are concerned, the real imbalance is posed by economics rather than security. Instead of helping Taiwan develop its economy, the US chooses to charge a protection fee to Taiwan. The US is obviously playing the Taiwan card for its own sake. It is in the common interest of both China and the US to maintain Taiwan's stability. China strongly opposes US arms sales to Taiwan. The Chinese government will also take practical measures corresponding to relevant US moves.

Since the end of the Cold War, no US government has benefited much from playing the Taiwan card. The Trump administration should learn lessons and try to avoid risking big losses for the sake of small gains.