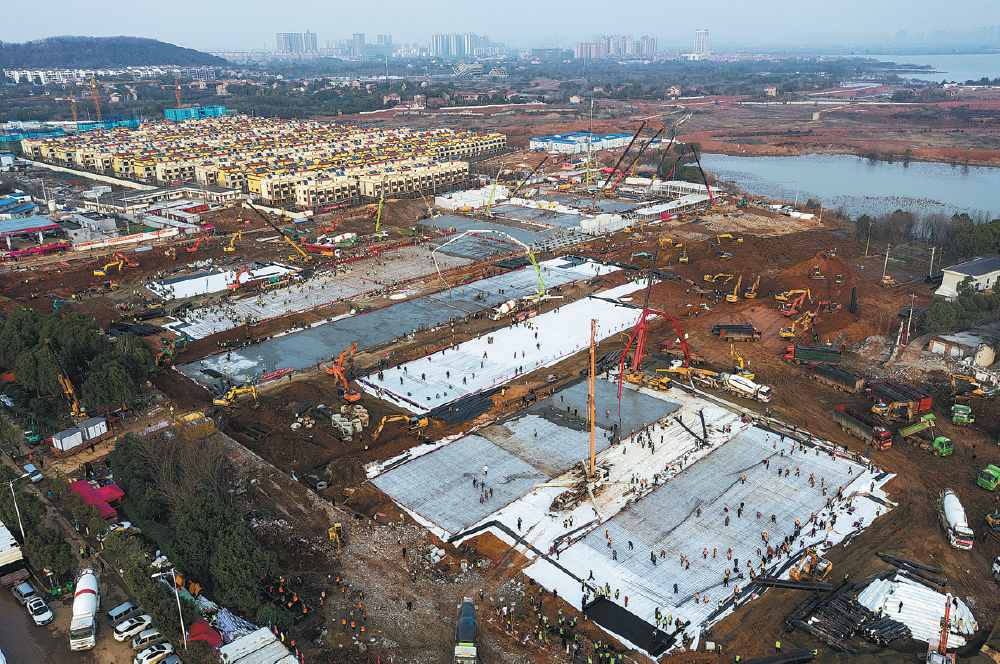 The number of confirmed cases of the novel coronavirus on the Chinese mainland has exceeded the total number of SARS cases recorded during that outbreak 17 years ago. But there is no need to panic, experts said on Wednesday, even though more cases are expected over the next few days.

The number of confirmed cases of the new coronavirus reached 5,974 on Tuesday — an increase of 1,459 over the day before, including 132 deaths, since the outbreak was first reported late December, according to the National Health Commission on Wednesday.

In addition, the number of suspected cases rose to 9,239.

In Hubei province, the epicenter of the outbreak, 840 new cases were reported on Tuesday, bringing the total number of confirmed cases there to 3,554.

A suspected case was reported on Tuesday in the Tibet autonomous region, which, if confirmed, would mean that every province, autonomous region and municipality on the mainland has acquired the novel coronavirus.

Wednesday's data mean the new virus has exceeded the spread of SARS in its first month. With SARS — severe acute respiratory syndrome — a total of 5,327 severe cases were reported on the Chinese mainland between the end of 2002 and Aug 16, 2003, including 349 deaths, according to what was then the Ministry of Health.

In addition, cases of infected foreigners on the mainland were first reported in South China's Guangdong province.

Three foreigners — a Pakistani and two Australians, who all had been in Wuhan recently — have been diagnosed with the coronavirus in Guangdong province as of Wednesday.

Guangzhou released on Wednesday a public letter and details of multilingual service hotlines for foreigners to get help. Wuhan and Tianjin also have provided foreigners with timely consultations and assistance on epidemic prevention and control by opening a 24-hour hotline service.

Zhong Nanshan, a prominent expert in respiratory diseases and a member of the Chinese Academy of Engineering, said the recent novel coronavirus outbreak may hit its peak in a week or 10 days. The outbreak will not last as long as the SARS outbreak — more than five months — in part because of strong measures to contain the outbreak adopted by the central government, he said.

There are still no effective drugs to combat the virus, but researchers and medical staff have been working on several methods, and life-support technologies have improved greatly since SARS, so the death rate will be less, he told Xinhua News Agency.

So far, there has been no official statement about when the epidemic will peak or how long it will last. Gauden Galea, the World Health Organization's representative in China, said in an earlier interview with China Daily that the WHO is organizing a number of researchers to model the case numbers, but no conclusion has been reached yet.

Zeng Guang, chief epidemiologist at the Chinese Center for Disease Control and Prevention, said that compared with SARS, which involved many critical cases, the recent coronavirus outbreak is less severe. People in a large number of confirmed cases showed mild symptoms, according to a report in Health Times on Wednesday.

However, the new virus is more difficult to control and prevent than SARS. It can jump between humans during incubation, which lasts up to 14 days, he said.

With the lockdown of Wuhan, Hubei province, the presumed source of the outbreak, the number of cases exported from the city will gradually be reduced, and the rise in cases in other parts of China will likewise slow, Zeng said.

Meanwhile, warming weather will also restrain the spread of respiratory diseases and contribute to control and prevention, he said. 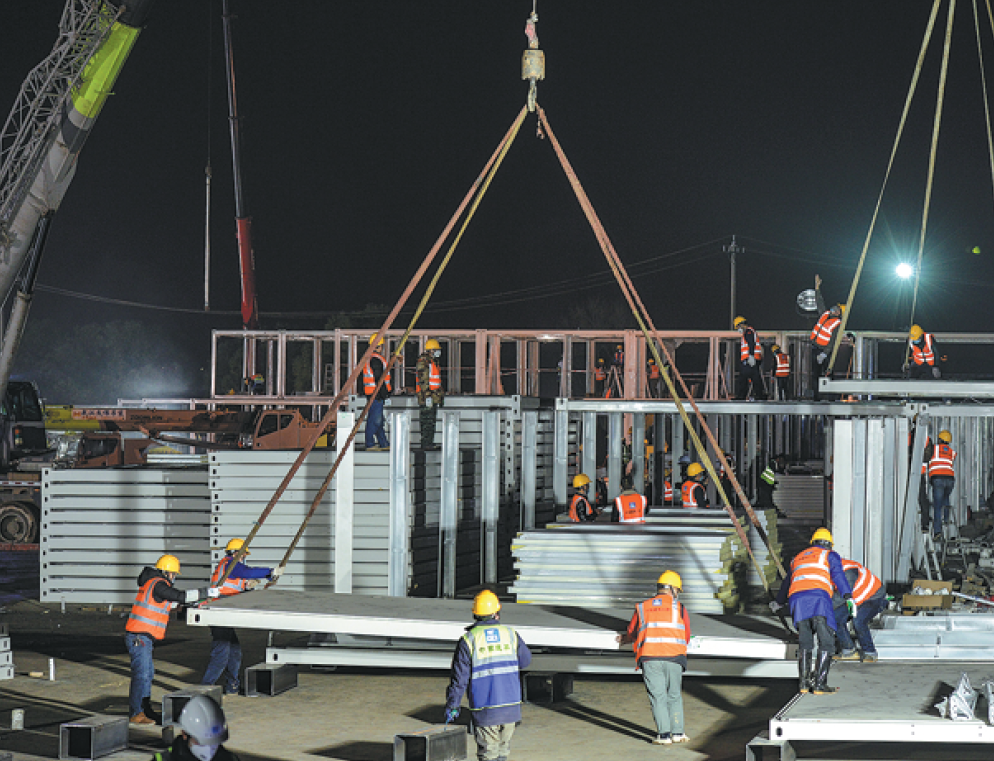 Workers bring the pieces together. Work is expected to be done by Feb 3, about seven days after it began. PHOTO BY SHI YI / FOR CHINA DAILY

The WHO said in a statement on Tuesday that studies so far indicate that most cases of the virus reported to date have been milder, with about 20 percent of all confirmed cases experiencing severe illness.

China's National Health Commission will continue to collaborate with the WHO to contain the outbreak, including studying the severity and transmissibility of the virus, it said. In addition, China will share biological material with the WHO to contribute to the development of vaccines.

The WHO will also send international experts to visit China as soon as possible to work with domestic experts to increase understanding of the outbreak and guide global response efforts, it said.

The statement came after a meeting between President Xi Jinping and Tedros Adhanom Ghebreyesus, director-general of the WHO, in Beijing on Tuesday.

"We appreciate the seriousness with which China is taking this outbreak, especially the commitment from top leadership and the transparency they have demonstrated, including sharing data and the genetic sequence of the virus," the statement said. "The WHO will keep working side-by-side with China and all other countries to protect health and keep people safe."

"Both the WHO and China noted that the number of cases being reported, including those outside China, is deeply concerning," the statement said. "Better understanding of the transmissibility and severity of the virus is urgently required to guide other countries on appropriate response measures."

Walter Ian Lipkin, a professor of epidemiology and director of the Center for Infection and Immunity at Columbia's Mailman School of Public Health who is known as a leading "virus hunter", is headed to the epidemic-stricken area in China to assist with efforts to contain the spread of the novel coronavirus, according to Columbia Global Centers in Beijing on Tuesday.

Based on the evidence so far, Lipkin said on Tuesday in an article updated on Columbia University's website that the novel coronavirus is not expected to spread to the same extent as SARS, which reached 33 countries.