OPINIONS As Japan and Russia relations warm up, Washington stands in the way

As Japan and Russia relations warm up, Washington stands in the way 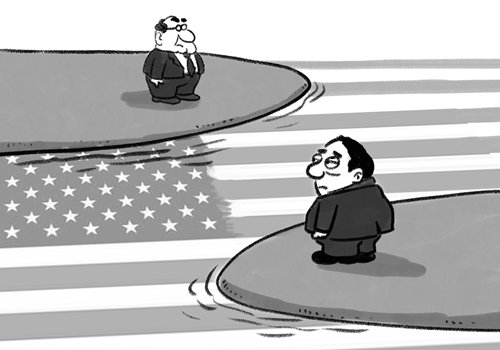 According to Japan's Asahi Shimbun newspaper, Japanese Prime Minister Shinzo Abe held talks with Russian President Vladimir Putin in Singapore on November 14. Both sides have agreed to speed up the signing of the Japan-Russia Peace Treaty on the basis of the 1956 Japan-Soviet Joint Declaration. Abe said he would pay another visit to Russia early next year. It is believed that the Japanese leader's re-election as head of the Liberal Democratic Party (LDP) in September has to an extent strengthened Moscow's confidence in developing Japan-Russia relations.Considering the agreement between Japan and Russia on the peace treaty, bilateral relations will hopefully deepen and new progress will be achieved in resolving the territorial disputes. According to Article 9 of the 1956 Japan-Soviet Joint Declaration, the Union of Soviet Socialist Republics, after concluding a peace treaty with Japan, shall cede to Japan the Habomai Islands and Shikotan. Despite legitimacy of settling the territorial dispute based on the provisions of historical documents, mainstream public opinion in Japan and Russia is not one on this. According to a survey released in 2016 by Levada Center, an independent Russian polling agency, 56 percent of the respondents "oppose" ceding any island to Japan. Yet the Japanese still want the complete return of the four islands known as Northern Territories in Japan, with which Russian officials and citizens will definitely disagree.Although there are still differences between Tokyo and Moscow on the territorial issue, it is believed that the Abe regime will insist on restoring the sovereignty of the Habomai Islands and Shikotan, and the two islands might be turned into special economic zones. For one thing, Abe has long been trying to solve the territorial dispute by strengthening economic cooperation with Russia on the disputed islands. For another, under the framework of the Japan-US Security Treaty, American troops in Japan can be stationed on Habomai and Shikotan if the two were handed over to Japan, which is exactly the point that Russia is most worried about. Therefore, the most likely result of negotiation between leaders of Japan and Russia is that they agree to define the two islands as special economic zones.In fact, in both the conclusion of the Japan-Russia Peace Treaty and the settlement of disputed territory, the US has long been the biggest barrier. The toughening US policy toward Russia affects and impedes the deepening of Japan-Russia ties. The reason why top leaders of Japan and Russia agreed to accelerate the signing of the peace treaty this time is not only because of good personal relations between the two leaders, but also because Abe tries to maintain a diplomatic distance from the US. Admittedly, under the framework of the Japan-US alliance, Japanese diplomacy cannot be completely independent of Washington in the short term, but an overall trend of "detachment from the US" has been observed. For example, in September 2016, Abe attended the Eastern Economic Forum held in Russia regardless of the attitude of the Obama administration. In the midst of the current US trade war against China, the Abe regime has been trying to actively improve Sino-Japanese relations. While the US government is advocating trade protectionism, the Abe regime is making efforts to safeguard the international multilateral trading system. Perhaps noticing the adjustments in Abe's approach, Putin showed a more positive attitude toward the signing of the peace treaty and bilateral relations.Japan-Russia relations have indeed been on an upswing so far, but it is still possible that the US might take measures to interfere and drive a wedge between the two countries. After all, with the signing of the Japan-Russia Peace Treaty, not only will Japan's need for "protection" be reduced, but also the rationality of US troops' presence in Japan or even in Northeast Asia will be weakened.