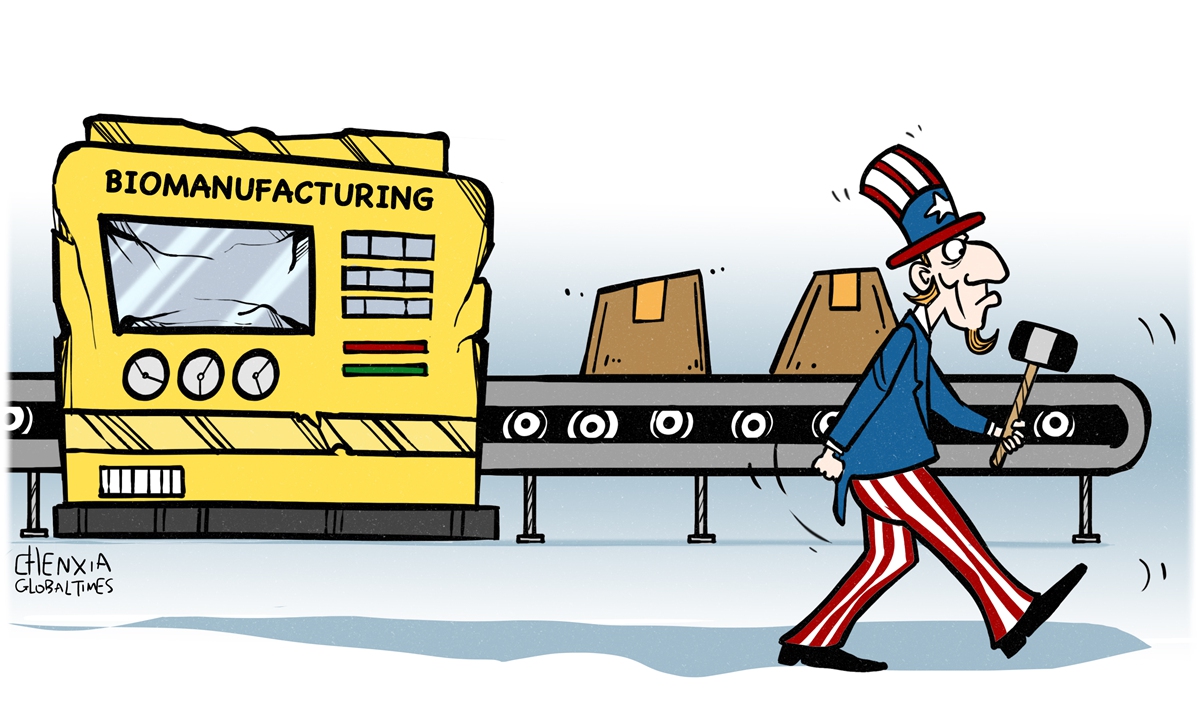 US President Joe Biden has signed an executive order to launch a national biotechnology and biomanufacturing initiative, which has been widely seen as a strategy aimed at bolstering US domestic biomanufacturing and artificially pushing a US decoupling from Chinese biotechnological ecosystems.

The White House said in a statement on Monday that the US has "relied too heavily on foreign materials and bioproduction," and the initiative will help the nation "substitute fragile supply chains from abroad with strong chains at home." Although the statement did not mention China, it is widely believed that the executive order aims to reduce the US' reliance on China for medicines and chemicals.

Since the US' decoupling campaign began to make headlines in 2017, Washington has been busy trying to coerce its allies to exclude China from the global supply chain, especially in strategic sectors such as the semiconductor industry. With Biden's new executive order, worries have grown that the decoupling will probably extend to new areas of biomanufacturing.

Biomanufacturing has been considered as a frontier of future competition among major global economic powers. Industry analysis suggests that bioengineering could account for more than a third of global output of manufacturing industries before the end of the decade - almost $30 trillion in terms of value, according to the statement released by the White House.

With the latest move, what is Washington after? Clearly, it not only seeks control of future biotechnology, but also to build the industrial base of a superpower with first-class competitiveness in the field of bioengineering. However, the question remains that whether the Biden administration will be able to accomplish this goal.

The US has long led the world in technological advancement, but its lead in science and technology has been eroding at a time when many other nations are gathering strength. In the present era of globalization, no country alone can control the entire industry chain.

Both Chinese and Western companies now play key parts in the global supply chain, and if Washington wants to pull Chinese enterprises out of the network, the Biden administration will have to artificially destroy the basis of current economic and trade cooperation through administrative means. This would mean that all international players in the global supply chains, US companies included, will suffer a loss.

The US' bioeconomy is booming, but gradual decoupling between the world's two largest economies would have an outsized impact on US companies by limiting their access to one of the world's fastest-growing markets.

China in May unveiled the nation's first five-year bioeconomy plan, aiming to boost the development of bioeconomy to reach an estimated scale of 22 trillion yuan ($3.28 trillion) by the end of the 14th Five-Year Plan (2021-25) period. The nation has long been a magnet for foreign investment as it typically offered buoyant returns and growth potential. It would be very regrettable if US companies miss the opportunity to gain more ground in the $3.28-trillion market.

Although China has reiterated that it does not seek a decoupling or engage in building a closed circle that excludes other countries, the US' technological decoupling campaign started under the administration of former US president Donald Trump has been even further emphasized under the Biden administration. If the decoupling further extends to the field of bioeconomy, such short-sightedness is set to backfire on US companies and its own economy.

The author is a reporter with the Global Times. bizopinion@globaltimes.com.cn