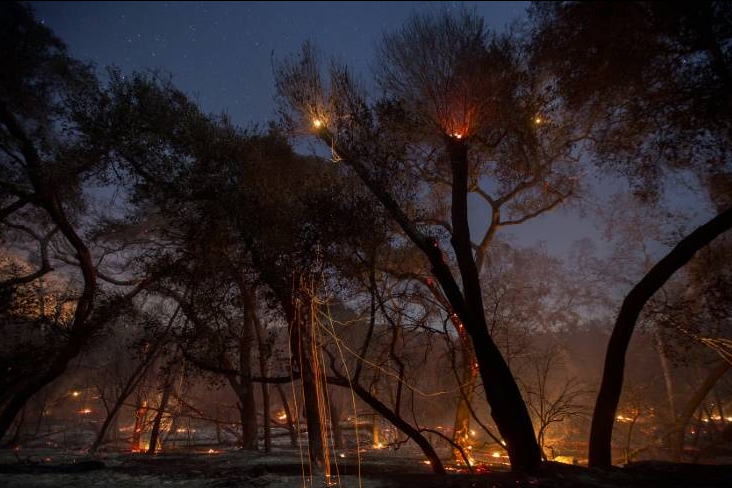 A freshly-burned forest is seen under the stars at the Lilac Fire in the early morning hours of December 8, 2017 near Bonsall, California

Brutal winds that fueled southern California wildfires finally began to ease Saturday, giving residents and firefighters hope for a respite as the destructive toll of the blazes came into focus.

After a five-day siege, some Californians were finally able to return home to inspect the damage wrought by the wildfires, which forced hundreds of thousands of people to flee and destroyed more than 850 structures including multimillion dollar mansions.

Despite the intensity of the fires that raged on multiple different fronts -- stretching from areas north of Los Angeles down to the San Diego region -- authorities have reported only one fatality.

With gusts of up to 60 miles per hour (95 kilometers per hour), relentless seasonal winds had continued to stoke the fires Friday, spitting embers and creating "extreme fire danger".

A "red flag" warning issued by the National Weather Service is in effect until 8:00 pm Sunday (0400 GMT).

The strongest winds are expected in the San Diego County mountains and foothills, with gusts over 60 miles per hour, the NWS predicted.

Winds were expected to calm somewhat but a red alert was extended into Sunday due to expected low humidity.

And despite the easing of the winds, meteorologists warned that smoke and ash could linger, prompting several counties to maintain air-quality warnings. 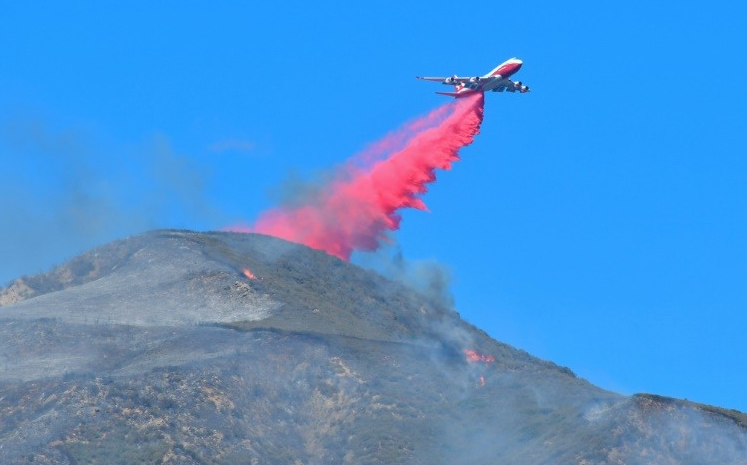 An aircraft drops retardant over burning embers and small fires on top of a mountain in Fillmore, California on December 8, 2017, on the eastern edge of the Thomas Fire in Ventura County

In the mountain town of Ojai the air-quality index was hovering over 500 -- at the top of the "hazardous" scale -- as fumes from the "Thomas" fire hung trapped by the mountains.

Since erupting in Ventura County late Monday, that blaze has seared 155,000 acres (60,000 hectares) and destroyed over 500 structures, but an area fire department spokesperson said Saturday containment should improve "after aggressive fire fighting" the day prior.

"This is kind of the new normal. We're facing a new reality in this state where fires threatens people's lives, their property, their neighborhoods," Brown said at a fairgrounds briefing

"We know from changing climate that (fires) are going to exacerbate everything else (and) in the longer term, I think we have to think through how are we going to adjust ourselves to nature as it changes," Brown said, his approach a stark contrast to that of US president Donald Trump, a doubter of climate change.

"We can't expect nature to adjust to our needs," Brown added.

The material cost of fire suppression efforts has skyrocketed to some $17 million, Ventura officials estimated.

The "Skirball" fire -- near the affluent, star-studded Bel Air district -- was 75 percent contained after engulfing entire hillsides in flames and scorching over 400 acres.

Firefighters contained 85 percent of the "Creek" fire -- the largest blaze that menaced the LA region, which roared through more than 15,000 acres -- while the nearby "Rye" fire, which has burned over 6,000 acres, was 80 percent contained.

The "Liberty" fire was 100 percent contained -- meaning "a control line has been completed around the fire which can reasonably be expected to stop the fire’s spread" -- as of Saturday night, the Murrieta Fire Department said.

Authorities near San Diego -- where the "Lilac" fire had rapidly charred more than 4,000 acres in a blaze that is now 50 percent contained -- issued a similar notice, saying improvement was expected but urging residents to remain on high alert. 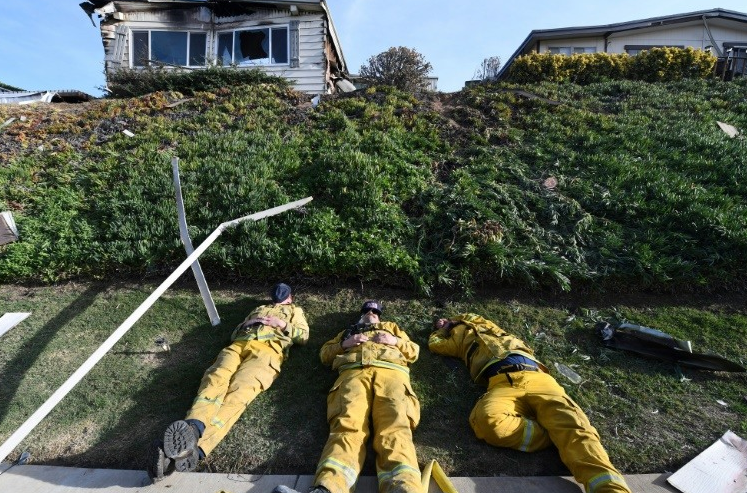 Exhausted firefighters have their first rest in over 20 hours since starting to fight the Lilac Fire, December 8, 2017, in Bonsall, California

The fire claimed the lives of more than two dozen racehorses after tearing through eight barns.

US President Donald Trump has issued a state of emergency in California, authorizing the release of federal funds.

The week's infernos capped California's deadliest year ever for wildfires. More than 40 people died in October when fires swept through the state's wine-producing counties north of San Francisco