OPINIONS Assange case exposes the double standard practiced by US

Assange case exposes the double standard practiced by US 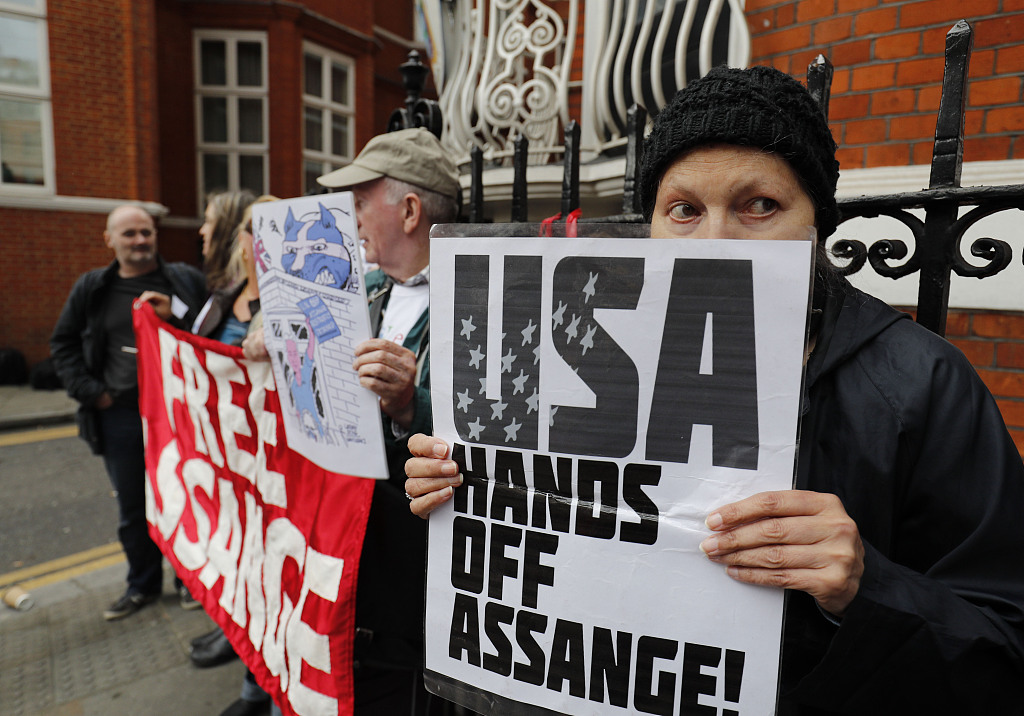 Wikileaks founder Julian Assange will fight his possible extradition to the United States in a British court. The US Department of Justice has accused Assange of helping former intelligence analyst Chelsea Manning to break into a Pentagon computer system, and the US administration has filed an official request with Britain for Assange's extradition.

A British court has already sentenced Assange to 50 weeks in prison for jumping bail following his arrest by London police from the Ecuadorian embassy on April 11 after the Ecuadorian government withdrew the political asylum granted to him in 2012.

Many consider the Wikileaks founder a hero for defying Washington, and releasing thousands of confidential US documents related to the wars in Afghanistan and Iraq, which severely damaged the US' image. The US administration has accused Assange of "invading" its cyberspace, mainly due to the Vault 7 leaks that revealed the details of the CIA's works. No wonder many see the US Justice Department's attempts to arrest Assange as a crackdown on whistleblowers.

The US Justice Department's decision is based on three factors. First, it wants to preempt any further damage to the US' image. For example, in April 2017, Mike Pompeo, then CIA director, said Wikileaks' actions are comparable to those by a hostile intelligence agency, and Assange and his likes are trying to destroy Western values to boost their personal standing in society.

Second, the US wants to expand its influence in Latin America. So Pompeo, who is now US secretary of state, required Ecuador to withdraw the political asylum it had given to Assange in 2012 to get US economic and financial support in exchange.

Third, the US administration wants to remove the potential obstacles for the 2020 presidential election. With the investigations into Russia's possible involvement in the 2016 US presidential election being dropped, the US administration has chosen to plug the other loopholes by taking action against Assange, which in turn would not only blunt the Democrats' attack on the Republicans but also prevent any more leaks of US documents.

Jeremy Corbyn, British Labor Party leader, has condemned the US' extradition request and said the US is eager to have Assange extradited because he exposed thousands of documents related to the US military's war crimes in Iraq and Afghanistan. And former Ecuadorian president Rafael Correa said incumbent Ecuadorian President Lenin Moreno aims to please the US and get loans from the International Monetary Fund in exchange for withdrawing the political asylum to Assange.

That the US has sought the extradition of Assange because he revealed many of the brutalities and criminal acts of the US military shows "freedom of the internet" exists only on paper in the US. No wonder Correa said the arrest of Assange reflects the double standard practiced by Western countries.

Compared with Edward Snowden, a whistleblower and former US National Security Agency agent, who was granted asylum by Russia, the experience of Assange is tragic and shows that those who expose the ugly side of Western governments cannot get political asylum in any Western country.

Wikileaks' exposé highlights the hypocrisy of the West when it comes to internet freedom. In particular, since the US controls 11 of the 13 root servers in the world and the other two servers are situated in its ally countries, there is a big question mark on internet freedom. Even if internet freedom exists, it is under surveillance of the US.

The US is known to force other countries to open their internet networks in exchange for deepening or improving trade relations. And with the China-US trade negotiation reaching a critical point, it would be interesting to see whether the US uses the same ploy against China and asks it to open its cyberspace.

The author is a researcher at the National Academy of Development and Strategy and a professor at the School of International Studies, Renmin University of China.