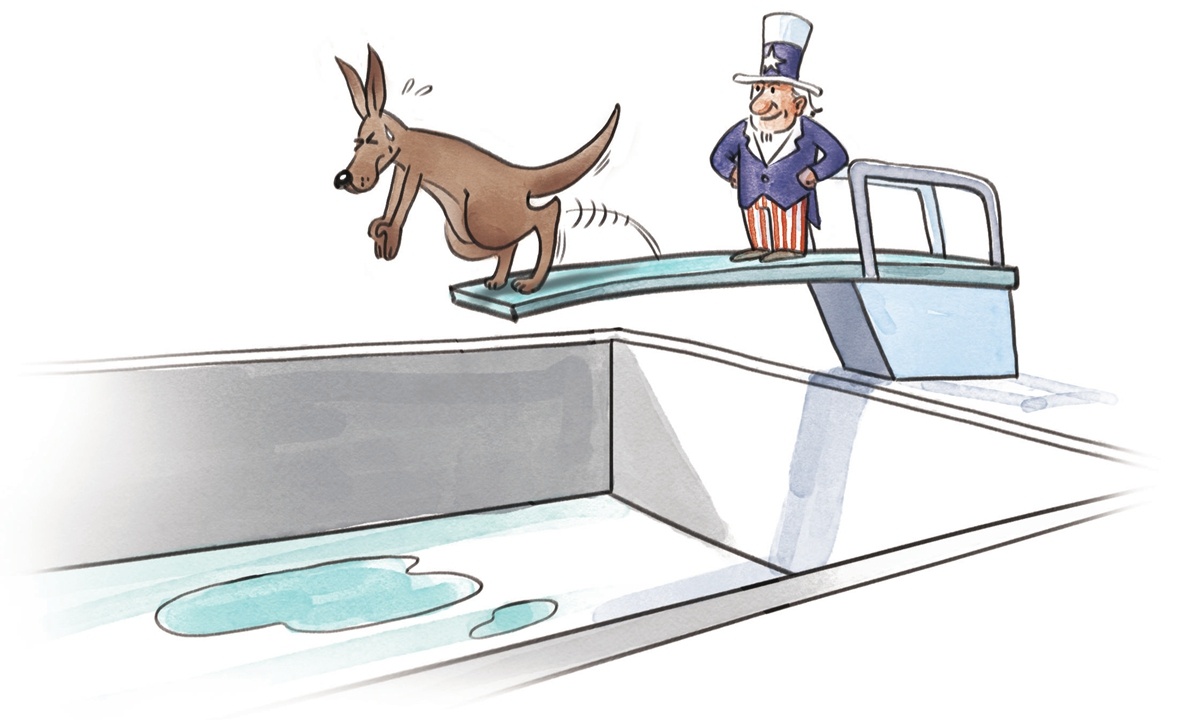 According to a report in The Australian newspaper on Tuesday, Australian Ambassador to the US Arthur Sinodinos said that Australia is prepared to bear the economic costs of standing up to China.

Sinodinos generally represents the official position of the Australian government. In addition to expressing Australia's strategic loyalty to the US, Sinodinos' statement also reflects the fact that Australia has essentially abandoned its balanced strategy and has taken sides in favor of the US.

It is evident that some Australian politicians have frequently expressed extreme anti-China remarks. For example, in July a senator urged the Australian government to kick at least 100 Chinese diplomats and consular staff out of Australia. They are using these tactics to cater to some conservative forces in the country in order to gain political power for themselves by expanding their base with more votes.

Despite these moves, the Australian government seems to be relatively restrained. When the US recently played the Taiwan card to provoke China, Canberra did not echo overt support for this action.

Australia has always emphasized its strategic independence. However, it has been proved that the country is hard to get rid of its strategic dependence on the US. So it shows certain wavering and also contradictory characteristics at the diplomatic level.

For the past decade, Australia has avoided challenging China's core interests. For example, Australia has been independent of the US on the Taiwan question and has avoided entering the 12 nautical miles that cross into China's islands and reefs in the South China Sea. Canberra chooses to prevent military conflicts with China.

But meanwhile, Australia has denigrated China in the international arena. It hypes up the "debt trap" theory and "China responsibility" theory. It seeks to enhance its influence in the Asia-Pacific region and garner attention from China and the US. In a word, it is seeking the maximum benefits with minimum risks.

In addition to following the footsteps of the US, Australia recently moved closer to two of China's neighbors - Japan and India. Japan's newly installed prime minister Yoshihide Suga made his first diplomatic call in office to Australian Prime Minister Scott Morrison. Morrison also announced he would visit Japan in as early as November. The meeting will be Morrison's first trip abroad since the outbreak of the COVID-19 pandemic. Moreover, Australia signed a joint statement for a comprehensive strategic partnership with India in June this year.

Both of the moves are actually in line with Australia's strategy. Canberra intends to cooperate with Tokyo and New Delhi to expand its influence in the Asia-Pacific region to contain China - all the while expressing its loyalty to the US. Australia believes that trade dependence between China and Australia is mutual. But it overestimates its position, believing that it is not that vulnerable. Australia thinks that, in the short term, China may not have alternatives for trade in energy, especially iron ore. Even if China wants to shift to importing from or investing in Brazil or Chile, it will not be accomplished in one move; therefore China would hardly reduce its reliance on Australia in the short term.

Nonetheless, China has already prepared for that. The deteriorating relations between China and Australia will have a much smaller impact on China's economy than on Australia's.

Australia has been exploring markets in Indonesia, Japan and India to reduce its dependence on China. Despite this, it will be difficult for both sides to get rid of their dependence on each other. Just as China's iron ore options are limited, it will be extremely difficult for Australia to find another market, such as India, to replace China. After all, India's economy is far less stable and its market is much smaller than China's. Moreover, due to ineffective virus prevention and control measures in India, the Indian economy has been severely damaged by the pandemic.

With Australia's "showdown," some may worry that the rest of the Five Eyes allies will follow suit. However, the UK and Canada are not as "loyal" to the US as Australia is. Wellington is even less likely to do so because New Zealand is less racist, less prejudiced against Chinese values, and less strategically ambitious than Australia. What China needs to worry more about is the future development of the quadrilateral cooperation mechanism among the US, Japan, Australia and India.

The author is an adjunct researcher at the Center for Australia Studies, China University of Mining and Technology. opinion@globaltimes.com.cn