OPINIONS Australia must do more for Chinese students

Australia must do more for Chinese students 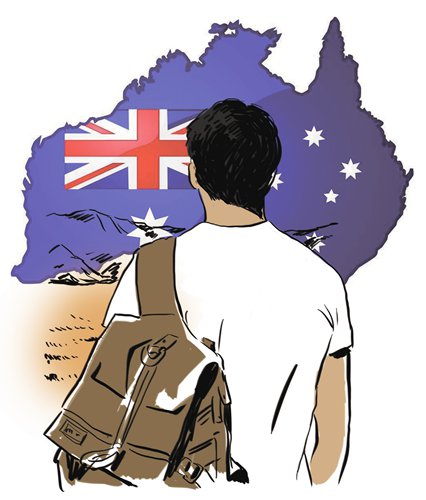 With a growing number of Chinese students going to study in Australia, many Australian universities are becoming financially dependent on international students. The field of international education, which is worth AUD 21.8 billion, has become Australia's third largest export market. This has in turn affected and changed the way that Australian universities are run. It is hard to tell how deep this influence is, but some believe Australian universities have lowered their academic standards in order to obtain more enrolment and make it easier for Chinese students to pass university exams. If Chinese students' English score does not meet the Australian universities requirements, they will be encouraged to go to the language school run by the university. Although the tuition fee is normally much higher there than at other non-university-run language schools, it inevitably gives them a better chance at being accepted later on. The influx of Chinese overseas students into Australia has notably impacted the local business market. More Chinese restaurants have opened up to satisfy demands of Chinese students searching for their home cuisine. Also, to help pay off student loans, many students start up a daigou (part-time retail consultant) business. It is estimated that last year there were 40,000 daigou in Australia, with the industry worth AUD 7.9 million. Many Australian brands such as UGG and Swisse have benefited greatly from this industry.If you go to Sydney's most famous shopping mall, Queen Victoria Building, you can feel that sales workers are particularly welcoming to Chinese-looking customers compared to locals.Through being a daigou, some students are too busy shopping to study, so they hire a ghostwriter, or exam substitute, to help them complete their degree. Many Australian universities are still unaware of this trend, and even if they were, they do not seem to be taking sufficient measures to address it. Although many Chinese students come to Australia for education and cultural exchange, they rarely engage with Australian society. Instead, Chinese students in Australia live in a "parallel society." It is true that Chinese students do not make enough efforts to integrate themselves into the culture. However, it requires a lot of confidence and courage to make friends with Australian students, and get involved in local social events.Have Australian universities done much to help Chinese students regarding cultural exchange? Not really. I rarely hear professors or lecturers helping them to understand Australian culture or purposely mix them with local students in a class. I was told that many lecturers are only hired contract to contract, thus their main concern is where their next job will be. How can they really take on these responsibilities for international students? There is no interest, nor benefit. Most Australian students are very friendly, but there is not so much initiative by them to make international friends outside of their own friends' circle. Furthermore, they do not have much interest in China, and would most often learn of China via the Australian media through stories of air pollution, or about alleged human rights issues. Their response is basically "sure, let's hang out," but they never call back. I recently read of a critical voice in Australian media talking about how Chinese students may be spies in Australia or how their responses regarding Chinese sovereignty are "harsh," "well-organized" and "heavily publicized." This made me laugh. Is Australia a country with freedom of speech as claimed? Why can't people express their opinion freely? If you want to maintain an environment of academic freedom that your students deserve, you should allow everyone to voice their opinion and respect that. For those Australian professors who do have some knowledge of China, they would understand that there are many reasons why Chinese students support their government. Chinese students grew up under the educational and cultural system ruled by the Communist Party. They were educated to be patriotic and to think and believe as the Chinese government does. That they politically support the Chinese government does not equate them to being spies. Chinese students come to your country to study critical thinking and how to be open-minded. It is not Australia's place to critique student's political standpoints. You cannot expect Chinese students to think or behave the same as Australian students. If their thinking and horizons have been broadened through obtaining an Australian degree, then Australian universities can be considered as having done a good job. I heard news that an Australian professor was afraid that Chinese students in Australia might attack students who had different opinions to them. I cannot verify or comment on this information, however, all I know is that it does not seem that Australian universities are doing enough when it comes to stopping people putting up signs in Chinese on campus that say things such as "Chinese students are not allowed in the building otherwise they will be deported." I sincerely advise Australian universities to pay more attention to their quality of education and stop treating Chinese students as a cash machine. Some of them are spending their parents' whole lifesaving to come to Australia to study. Are you providing enough knowledge and opportunities for them in return?