Australia need not follow US script on its relationship with China 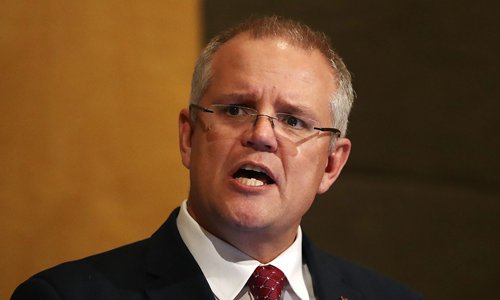 In his recent book, How to Defend Australia, Australian security analyst and commentator Hugh White reiterates his argument that Australia is embroiled in an ever-escalating contest of power between China and the US. He emphasizes that the choice Australia makes will be pivotal and decisive to its future place in the new era, and in the new Asia-Pacific region.

Australia's traditional defense and security alliance with the US is the outcome of the post World War II world order, but the end of the Cold War and the peaceful rise of China in recent decades have ushered in a new international scenario.

In particular, since US President Donald Trump assumed office in 2017, Australia has increasingly found itself caught up in an unimagined and unprecedented conundrum - whether to blindly cling to the anti-China stance that Washington has been belligerently championing while demanding all-round support from its allies, or to embrace the challenging situation and make innovatively strategic changes to its diplomacy.

The extraordinary transformation in Australia's neighboring region and the whole world has caused profound anxiety among some strategists, policymakers and politicians Down Under who have been adhering to the Cold War mind-set and refused to move ahead with the historic headway provided by sweeping global development.

For example, the recent incendiary vilification of China by West Australian Liberal member of parliament (MP) Andrew Hastie, who on August 8 compared China's growing influence to the rise of Nazi Germany, showed the effect of Washington's ballistic rhetoric and crusade to contain China and hinder its development. It also reflects his inability to adapt to the massive geopolitical and geoeconomic changes. Hastie, the jingoistic former special air service regiment captain, could not distinguish today's world from 1940's Europe and sermonized on the necessity of "geopolitical struggle" against the so-called China's intrusions that exist in his fantasies and those of his ilk. The fact that he divided the world into friends and enemies based on systemic and ideological differences is simplistic and out of date.

It is pathetic that some Australian politicians have been reduced to pliable marionettes of such anti-China puppeteers as the US Secretary of State Mike Pompeo to persistently fuel the so-called China threat theory as a way to seek security guarantee from a country that has in fact been hijacking the world economy to serve the prioritized political and economic interests of its own.

It was prudent for Australian Prime Minister Scott Morrison to stress recently that Australia's relationship with China could withstand any challenges. Such challenges may originate from the systemic and social differences between the two countries, but more importantly they come from coercive pressures of US agenda of thwarting China's development in the region as well as around the world. However, there is no point in Australia closing ranks with the US in taking on China as a rival. It is disturbing that a number of Australian federal MPs support and have been defending Hastie's drivels, echoing his conspiracy theory about China. However, luckily there are still sensible voices such as Western Australia's Premier Mark McGowan, who criticized the MP and urged him to "stop damaging the relationship and threatening WA (Western Australia) jobs with extreme and inflammatory language."

It is in China's national interest to maintain and develop the comprehensive strategic partnership with Australia. Both countries need to cherish and promote the bilateral relationship that has been reaping mutual benefits for 47 years. Neither side wishes to see deterioration of the relationship in all aspects. As Penny Wong, Australian Labor Party's foreign affairs spokeswoman, recently emphasized, Australia's relations with China are critical and consequential.

In face of the Trump administration's reckless disruption of the world's rules-based trade order that has been threatening to wreak more and further havoc on the economy of many countries including Australia, Canberra needs to recalibrate its diplomatic policy to better serve its own national interest rather than being in cahoots with Uncle Sam as the latter's surrogated deputy sheriff in the Asia-Pacific region.

The world today is characterized by diversity and multiplicity. China's answer to the current challenges in the world resonates with the Confucian wisdom - to seek harmony instead of imposing uniformity. China respects Australia as a country of economic dynamism, social openness, and multicultural resilience. China expects Australia to show the same respect and trust which would contribute to further cooperation between Beijing and Canberra.