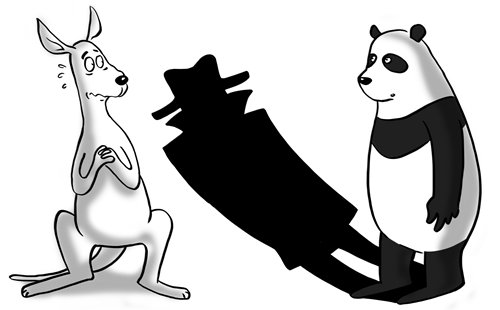 The Australian Security Intelligence Organisation told a parliamentary inquiry last Wednesday that the threat posed by espionage was worse than that during the Cold War. China was rated an "extreme" threat on a secret country-by-country counter-intelligence index. Given Australia's continuous hyping up of the China threat theory, this is hardly surprising.

Political infighting is one of the major causes of finger-pointing. Led by Tony Abbott, the Coalition, also known as the Liberal-National Coalition, came to power after a landslide election victory in 2013. But only two years later, Abbott was ousted as leader of the Liberal Party by Malcolm Turnbull, who later became Australia's new prime minister. Since then, the Coalition started fraying and began to lose credibility, as opposition parties emerge with a new vigor.

For the moment, the power and influence of the ruling and opposition parties are matched. Neither side stands out in terms of economic, social and reform policies. As such, finding faults has become a convenient way to malign the opposition. The hyping up of the foreign spies issue is a sharp weapon used in political infighting.

In recent years, Canberra has been accusing Beijing of turning Chinese students in Australia into spies and Chinese donors have been pouring big money into Australian political circles. The claims, which lack credibility, are apparently related to the country's political strife.

The Chinese donors to Australian political parties either have green card or Australian citizenship. So technically, it is Australians making donations to their parties. Does that have anything to do with China?

Chinese students are overseen by China's education authorities. Which country's education ministry would send secret agents and supervise spying activities overseas? Tens of thousands of Chinese students studying abroad are paid for by their parents. In most cases, their parents have no control over them, it sounds ludicrous that a few diplomats in the Chinese Embassy in Australia would turn them into spies.

Clive Hamilton, former Greens candidate, claimed that China's espionage and influence campaign is overwhelming and the reason being "Australia is seen to be the weak link in the Western alliance." Hamilton is not the only one to think so. This mind-set has been pervasive in Australia for quite some time. As a Western nation geographically far from the developed world, Canberra often feels the country is easy to be encroached upon.

Being a former British colony, Australia was constituted by mostly European immigrants, who believed that Western culture is orthodox. However, it is surrounded by different cultures from Asian nations. During the Australian gold rushes, the country needed to bring in laborers, though worrying that its white society would be disturbed and threatened by immigrants. That is how the White Australia Policy, which was meant to bar people of non-European descent from immigrating to Australia, emerged.

Canberra seems to have been worrying all the time. Previously, it was skeptical of Indonesia and Japan. Today, it is concerned over China's rise. Perhaps, it will feel anxious about India in the future. However, no one thinks Australia is a "weak link in the western alliance." This is a phrase created by Australians themselves. Has any mainstream media outlet in the world described the country that way? No. But the nation's political parties often create a fuss about such things and keep adding political legitimacy to such figments of imagination, like the threat from Chinese espionage.