OPINIONS Australia ties too vital to be hurt by a fraudster

Australia ties too vital to be hurt by a fraudster 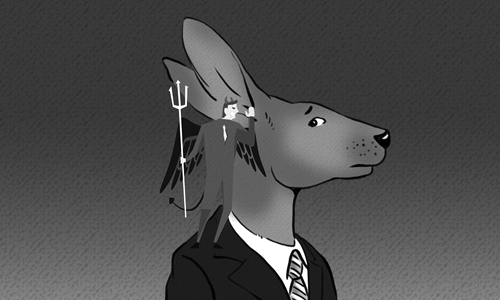 In October 1943, Max Harris, the editor of Angry Penguins, then Australia's leading avant garde modernist literary magazine, received a package of poems supposedly written by a deceased poet, Ern Malley. But as it turned out, Malley was a fictitious figure and the poems were in fact forged by a couple of critics by piecing together fragments from dictionaries, quotations, plays and a report about the breeding grounds of mosquitoes. The trusting Harris showered high praise on the nonexistent poet, calling him "one of the most outstanding poets that we have produced" in Australia. The hoaxers later revealed the shocking truth that the bunch of randomly concocted fake poems, which had won the loudest applause from the celebrated modernist magazine, were aimed at shaming and ridiculing the modernist literature in Australia at the time.

Penguins could be gullible. Those poor creatures could be easily misled and fooled by some flippant teasers. But it is really astounding that the most prominent Australian media of today, such as The Sydney Morning Herald, The Age and 60 Minutes, could jump in excitement at an apparently fabricated fairy tale of a convicted fraudster, Wang Liqiang, claiming to be a defecting Chinese spy who told Australia's top-level intelligence agency, Australian Security Intelligence Organisation (ASIO), about "how China had funded and conducted political interference in Taiwan, Australia and Hong Kong." More surprising is that ASIO claims to be paying serious attention to an equally bizarre drama alleging some Chinese scheme to plant a Chinese-Australian car dealer, surnamed Zhao, in Canberra's federal parliament.

Even the most amateurish readers would gawk in disbelief at the imposter's outlandish account that Wang, at the age of 26, had assumed important powers to make decisions and give orders related to some 007-style theatrical operations.

His preposterous tale is a bizarre coincidence with the conspiracy theory about the car dealer, portraying a sinister image of China threatening Australia's security and sovereignty.

The Cold War was over about 30 years ago, but the ghost of ideological battle has been obstinately hovering Down Under awaiting resurrection. The fact that the media and some political figures in Australia could be so excited about such implausible cloak and dagger stories is indeed embarrassingly preposterous, indicating some Australians' nostalgia and a deep-rooted antipathy toward China and the Chinese way of governance. The voracious journalistic vultures don't need any prompting and goading to swoop upon such tittle-tattles leaked to them by some intelligence agencies with their manipulative hand.

Paul Keating, former Australian prime minister, recently said "a group of national security agencies which are now effectively running the foreign policy of the country" spoiled the "subtleties of foreign policy and the elasticity of diplomacy." He also condemned Australian media's sensationalism, ignoring its public duty while "preferring instead to traffic in side plays dressed up with cosmetics of sedition and risk."

The anti-China camp in Australia consists of only a small cluster of extremists, but they have been stirring up one wave after another of anti-China frenzy as part of a scheme connived in the US to contain and counter China's development domestically and globally. Espousing and campaigning for Washington's global strategy, Canberra has literally been acting as Washington's deputy sheriff in a number of cases to secure the latter's supremacy and hegemony in the region.

It serves the interest of some security agencies to invent a foreign enemy, but such reckless fabrication would only jeopardize Australia's national interest. It is not in Australia's interest to decouple with China, which would only lead to unforeseen economic disaster for Australia, and cost China dearly as well. In the backdrop of the current US-lunched trade war against China, it is to the benefit of both China and Australia to strengthen the collaborative partnership.

Australian Prime Minister Scott Morrison has on a number of occasions asserted that Australia-China relations could withstand any challenges. This is very positive and constructive. A more independent China policy is important for Australia in today's world of uncertainties.

This understanding resonates in Paul Keating's speech, in which he urges Canberra to pursue a more balanced policy to manage bilateral relations with Beijing. We hope this course will not be derailed by some fraudsters and storytellers.