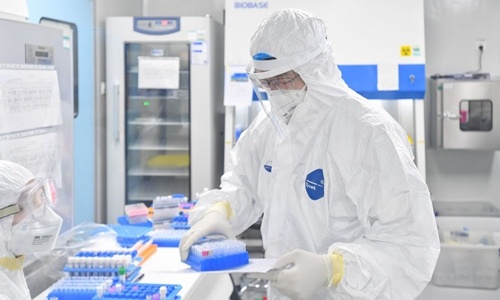 Authorities and media across the country are busy disproving rumors circulating online about the novel coronavirus pneumonia (COVID-19) outbreak, as some have triggered unnecessary panic among the public.

The following are five pieces of misinformation recently spread on Chinese social media, which have now been disproven by relevant government departments or or-ganizations.

Fact: No recovered patients have relapsed in the community in question.

A picture of a COVID-19 case notification in a residential community in Wuhan, Central China's Hubei Province, sparked fear on social media on Thursday.

"Today the community has two new confirmed cases, both of which are recovered coronavirus patients," read the notification.

The community clarified later the same day that the two patients had not relapsed. "We call them 'new cases' because we used a new calculating method today, which includes recovered cases in the total confirmed cases," it said, apologizing for the confusion it had caused.

Theoretically, recovered patients have an antibody that can protect them against the virus, local media Chutian Metropolis Daily reported on Friday, citing medical ex-perts.

Nonetheless, as the virus' ability to mutate remains unknown, experts suggest re-covered patients quarantine themselves for 14 days after being discharged from hos-pital.

People have to know how cunning COVID-19 is. A patient in Southwest China's Si-chuan Province who had been cured and discharged from hospital, for instance, was found nucleic-acid positive on the 10th day after returning home, local health au-thority said Friday.

Fact: The 'seizure notice' was fake.

A photo of a "seizure notice" was spread online on Thursday evening. It said that Shanghai police had seized a total of 113,000 infrared forehead thermometers from passing transport vehicles at a highway entrance in a suburb of the city.

The thermometers are virus prevention-related materials, which must be transported with the correct documents, the "notice" read. "Materials without the correct docu-ments will be seized by police," it added.

The Shanghai police debunked the rumor on its official Weibo account on Friday, saying the notice was forged and no such incidents had occurred. "We are conducting further investigation into the 'notice,'" it said.

Fact: He made no such statement.

A rumor that renowned respiratory scientist and the central government's top medi-cal advisor Zhong Nanshan had estimated "the time when various provinces will re-move traffic restrictions" was circulated on social media.

It suggested that 31 provinces and municipalities including Beijing, Shanghai, Si-chuan and Heilongjiang would remove traffic constraints around March 10, and that nine provinces including Guangdong and Henan would resume normal traffic around March 25.

The rumor even held that Hubei, epicenter of the epidemic with 62,662 confirmed cases as of 4 pm on Friday, would "resume traffic in the middle of April."

Sanxiang Metropolis Daily, a newspaper based in Central China's Hunan Province, reported on Friday that Zhong had never estimated the date of traffic resumption.

"What Zhong actually said was that the expected high-point of the epidemic may occur in April," said the newspaper.

Rumor: Another whistleblower doctor has died of COVID-19.

Fact: She is currently working on the frontline.

Ai Fen is one of eight "whistleblower" doctors - that number including the late Li Wenliang, who tried to warn other medics of the virus at the end of December 2019. Ai was recently said to have died as a result of contracting the virus, which is not true.

Ai works for the Central Hospital of Wuhan as its emergency department director. She told news outlet thepaper.cn on Thursday that she is currently busy fighting the virus.

"I also saw the rumors," she told media. "I haven't been infected with the virus. I feel very well."

Rumor: All patients at a psychiatric hospital have been infected, and some es-caped.

Fact: A few patients have been infected, but no one has escaped.

Recent rumors surrounding Huchang Psychiatric Hospital, a civilian-run psychiatric hospital in Xiantao County, Hubei, have made many local residents anxious. Some rumors suggested all the hospital's patients had been infected with the virus, and some said infected patients had escaped.

According to a clarification notice from Xiantao's health authority on Thursday, the hospital has 18 confirmed COVID-19 cases among its 130 patients and 49 staff members.

All confirmed cases in the hospital, including 16 patients and two workers, are re-ceiving treatment at local appointed hospitals, read the notice.

"Other people at the hospital in quarantine for medical observation," it said, adding that no infected patients had escaped as rumors claimed.