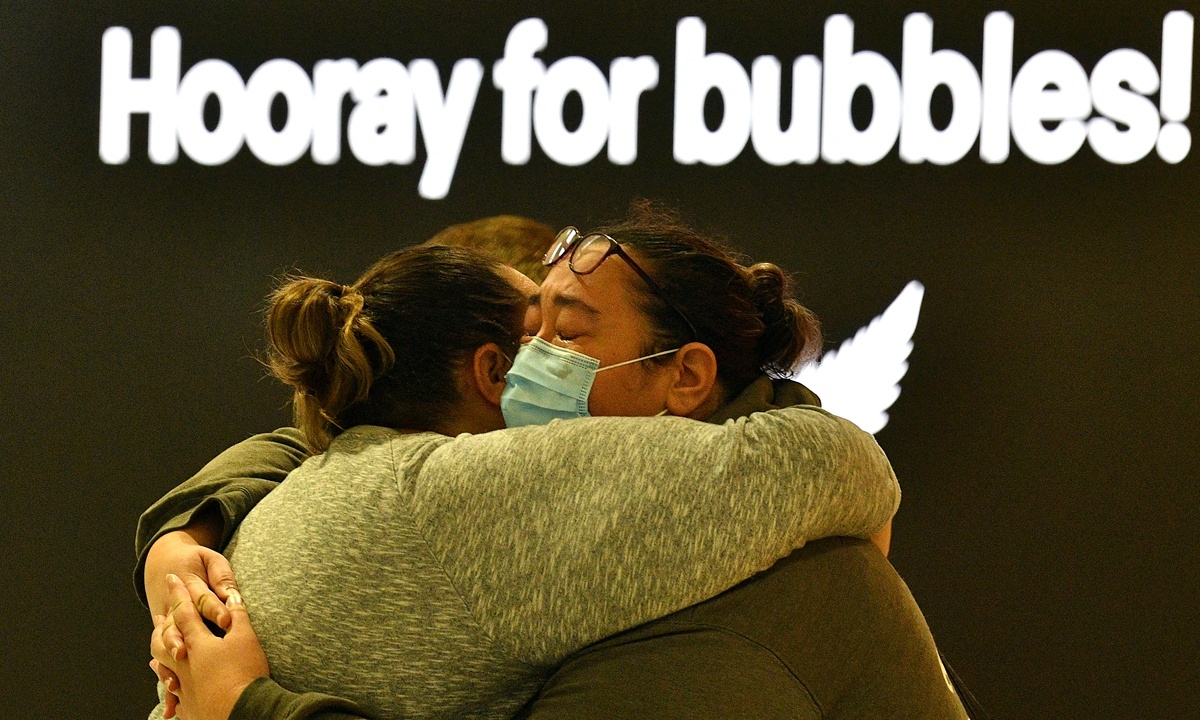 A woman (right) hugs a family member before her departure to New Zealand at Sydney International Airport on Monday, as Australia and New Zealand opened a trans-Tasman quarantine-free travel bubble. (Photo: AFP)

New Zealand announced on Tuesday to suspend its quarantine-free travel bubble with Australia's Victoria state due to a new cluster of COVID-19 cases reported there.

It marked the fourth time that the much-hyped Australia-New Zealand travel bubble has been disrupted by the repeated outbreaks of new coronavirus cases since the trans-Tasman bubble began in mid-April.

While the two neighboring countries have both been successful in bringing the outbreak under control, frequent pauses show that the health requirements for an ideally "clean" bubble could be both challenging and unsustainable. If anything, the awkward situation of their quarantine-free travel arrangement that risks temporary halts at any time throw cold water on hopes that the bubble could revive the multi-billion-dollar tourism sector and thus offer a route to economic recovery for both Australia and New Zealand.

One of the main reasons that many in the two countries have high hopes for an expanded travel bubble is that tourism is important to both economies, particularly two-way tourism between the two countries. Before the pandemic, between 1.18 and 1.5 million Australians came to New Zealand annually, accounting for 40 percent of the country's overseas visitors, according to media reports.

While it is true that some Australians travelled to New Zealand to reunite with their relatives as the governments expected after the opening of the travel bubble, it appears that tourism is still far from returning to pre-pandemic levels, as tourists are generally concerned about the uncertainty when it comes to their travel plans with the bubble under the risk of being closed out of sudden.

To a certain extent, the limited role of the travel bubble in the economic recovery path of both countries may reveal the fact that the two neighbors' trade and economic complementarities are not as strong as many previously thought.

In fact, the economic recovery is moving faster than expected in New Zealand. On Tuesday, Wellington said it will end next month the temporary foreign investment rules it imposed last year to prevent fire sales of distressed corporate assets during the pandemic. It is the robust exports of dairy products, wool and meat to its major trading partners such as China that has underpinned its recovery.

Worldwide, travel bubble is not unique to Australia and New Zealand as global economies are struggling to return to normalcy. Singapore has been discussing a travel bubble with Hong Kong, while some European countries are also planning for it to allow free movement between them. Yet, under the current circumstances, it will take time for industries such as tourism to recover even with a travel bubble. In this context, how to obtain new growth will be a major test for each economy's resilience and governance.

At a time when the original economic and trade pattern faces the possibility of restructuring against the backdrop of the pandemic-battered global economy, it is more essential than ever for countries to keep an open mindset, making more friends, maintaining traditional friendship, and creating new opportunities for cooperation. That's the spirit that all economies need in the post-pandemic era.