Nepali Prime Minister K.P. Sharma Oli's ongoing visit to China, his first after re-election, has been underscored as important by the two countries. This has caught India's attention. Oli's visit could be historic, promoting comprehensive cooperation between China and Nepal and injecting vitality into the Himalayan nation's economic development. 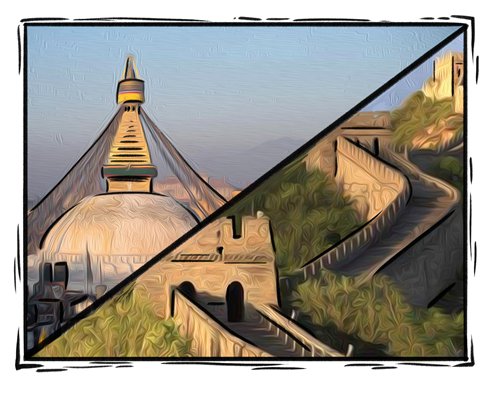 There is huge potential for China-Nepal economic cooperation. As an underdeveloped country, Nepal has to use foreign capital and technology. It is unable to fully tap its rich water, hydro power and tourism resources. Improving infrastructure to boost development and improve people's living standards has been a priority for the nation. China has the capital, technology and low-cost construction capability with huge outbound tourism potential to help Nepal cope with its problems.

Nepali people are keen on cooperation with China. They have witnessed China's miraculous development and felt major opportunities thereby created. An increasing number of young Nepalese are passionate about learning Chinese and studying in China. Nearly 10,000 Nepali students are now studying in China. During my stay in Nepal in March, I felt how eagerly Nepalese want their government to promote cooperation with China. They have high expectations of the Tibet-Kathmandu railway that can transport them to Lhasa in five hours.

Nepal's current political stability also facilitates its cooperation with China. With seven prime ministers in five years, Nepal has seen inconsistent and unstable policies. Investors were discouraged as intergovernmental agreements were often reassessed or even scrapped when a new administration took office. When Oli visited China in March 2016, the two sides inked 10 deals, but most of them were not implemented after he resigned in July 2016. In Nepal's legislative elections last year, two major left-wing parties, the Communist Party of Nepal (United Marxist Leninist) and Communist Party of Nepal (Maoist Center) won the majority, showing Nepali people's desire for a stable government. The two parties were unified into a new communist party in May and their leaders reached an agreement to share power. As long as big conflicts don't arise within the new party, Nepal will be able to maintain a stable government and policies. This can help implement the deals with China and attract more Chinese investment.

A benign China-Nepal-India relationship is now needed. India has long been concerned about Nepal getting closer to China and tried to meddle in Nepal's domestic politics to hurt Kathmandu's cooperation with Beijing. This was partly responsible for Oli's resignation in 2016. Nonetheless, Oli intends to enhance ties with China for the sake of Nepal's development, not to go against India. As a small country sandwiched between China and India, Nepal has to maintain good relations with both. Displeasing neither of them serves Nepal's interests. And neither of its neighbors should push Nepal to pick one out of the two.

India needs to have confidence that Nepal won't turn its back on New Delhi howsoever well it gets along with China. Beijing is happy to see close relations between Nepal and India. While Beijing is laying the pitch for Nepal to enter China and reach out to the world, the path of India toward the outside world is indispensable. Nepal should take advantage of its proximity to two emerging markets to advance its own development.

If Beijing-New Delhi relations improve, their trilateral cooperation with Nepal will get a boost.

When Indian Prime Minister Narendra Modi visited China in May 2015, Chinese President Xi Jinping proposed to jointly build the China-Nepal-India Economic Corridor (CNIEC). But later, New Delhi didn't give any substantive response, probably due to its skepticism about China.

After the two leaders met in April in Wuhan, China-India mutual strategic trust has significantly improved and bilateral relations are expected to enjoy stable development in the long run, including the CNIEC. This will not only facilitate Nepal's development, but also make it a bridge between China and India to create opportunities for northern India. Only with India's participation can the linking of Tibet-Kathmandu railway with Nepal-India rail produce economic benefits.

The author is a research fellow at The Charhar Institute and director of the Center for Indian Studies at China West Normal University.