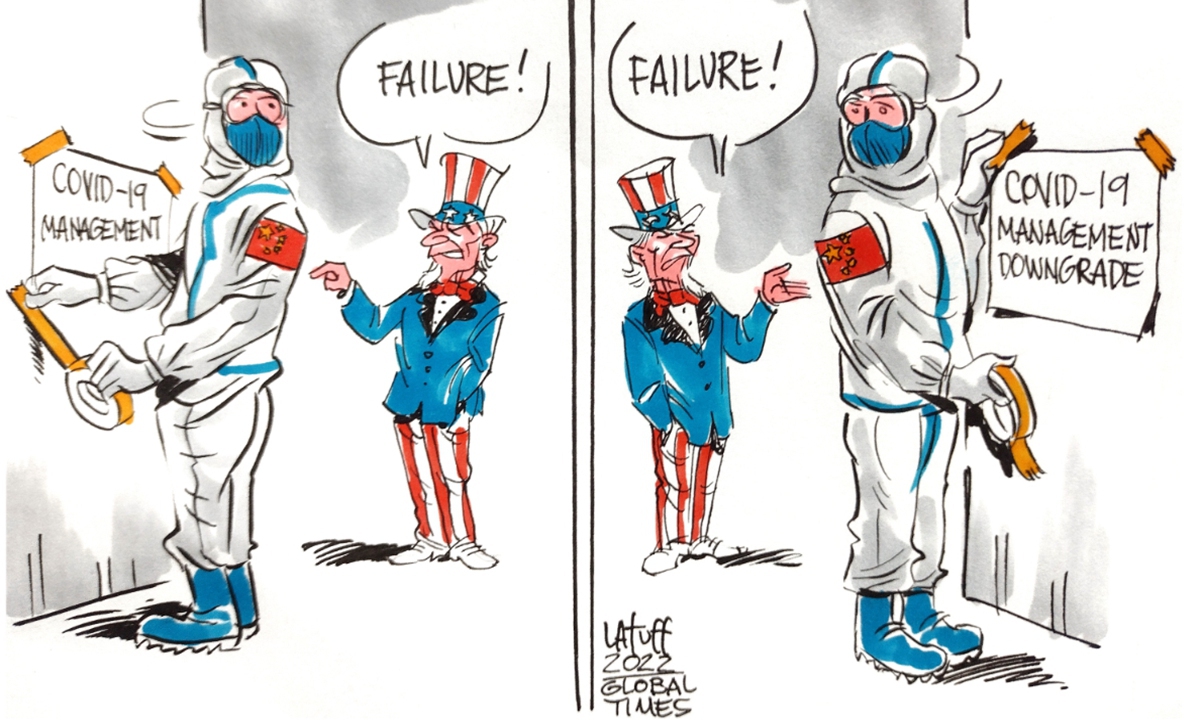 The US has always boasted that it is the nation of the future. However, if we zoom in for a close-up of the US, we can see its penchant for being old-fashioned. For instance, its legislative building is called the "Capitol," which is associated with the Capitoline Hill in Rome, and you can see the Latin motto E Pluribus Unum and crossed fasces on the seal of the US Senate. In addition to their love for cosplaying Rome, they also seem to be fond of old-fashioned smearing and playing dirty.

Recently, the US and its coterie have been setting traps for China by spreading fake news about China's COVID situation and strong-arming its footmen to restrict tourists arriving from China. While the US has drawn upon the thousand-year-old, most obsolete trick of smearing to bully China, its baseless accusations will not hurt China and only drain its own credibility.

About 2,000 years ago, Zhao Gao, the chancellor of the Qin Dynasty (221BC-206BC) and the most powerful man at the time, took a deer to court. He presented it to the emperor as a tribute, but claimed that it was a horse. The emperor didn't accept his statement, so Zhao asked the court whether it was a deer or a horse. Afraid of Zhao's political muscle, most officials took the chancellor's side. In this story, Mr. Zhao proved his overwhelming power; However, no matter how many officials are forced to tell lies, a deer cannot be turned into a horse.

China has always held high the banner of transparency and international cooperation. These days, some countries have repeatedly tried to pin the label of not being transparent on China. Knowing that it doesn't hold water, they also attempted to make non-transparency a pillar to restrict normal people-to-people exchanges. What these countries turn a blind eye to is the fact that China has been sharing relevant information and data in an open and transparent manner with the international community, including the WHO, since the beginning of the pandemic.

Genome sequencing, which is key to the R&D of vaccines and medicine, was shared at the earliest opportunity; The latest information about the most recent cases, in particular, the genome data, has been provided via mechanisms such as the GISAID. More than 60 meetings have been convened between China and the WHO to look into the response to the COVID-19 pandemic. Even though China has downgraded management of COVID-19, China's banner of transparency in international communication has never fallen. For instance, on December 30, 2022, Chinese authorities had a virtual meeting with the WHO over the current COVID-19 situation, treatment, and vaccination. No one is denying that due to the swift spread of the Omicron variant, data on certain details have lagged behind, but China is accelerating its data collection and updates will soon be seen. The argument that China is attempting to cover up something is merely a cliche, a boring conspiracy.

Most of the time, Western countries are allies in a state of disunity, but their spirits rise when it comes to pointing fingers at China and politicizing normal issues under the flag of unwarranted charges. What makes it funny is that every time they try to do so, they lift a rock only to drop it on their own feet. They have yet to realize that Pandora's Box has been opened.

Concerns have been put forward by certain countries regarding China's so-called "U-turn" policy adjustment, among which genome sequencing that can sound the alarm when a new variant emerges sits at the center. China is fully aware of its importance and has poured resources into this field, and data has been continuously uploaded to the GISAID platform. However, it is universally known that because of the dynamic zero-COVID policy, the main variants in China are several generations behind countries that chose to lie flat long ago; it is hard to say that China can catch up with the West concerning virus mutation. Instead of suggesting that China is to blame if any new variants emerge, these countries should also be watching their own situations more cautiously.

In 2020, the US failed to protect its people from the first waves of the pandemic, which led to heavy casualties. To cool down the anger of the people, the US administration chose to shift blame to China, saying that the situation in the US would not have worsened to such a degree if China had shut down the border earlier, if it had shared information earlier (which China did), and so forth. Although blame-shifting has been proven useless by the US' 1 million deaths, the country's preference of drawing on it as a tool never changes. It seems that this time, they are using their old tricks again. Pulling back the curtain of kindness and generosity, what people see is only a plot engineered to frame the origin of new variants as China's fault.

Blame shifting will never become Noah's Ark, but it does open Pandora's Box. China will not stop genome sequencing and data sharing and since the US' trap has been detected, how can it be expected to work? The answer is obvious.

When a Catch-22 situation catches the US

Another proof of its fondness for double standards, the US has set a Catch-22 situation for itself. When the dominant variant was much more potent, the Delta variant, for instance, China maintained its dynamic zero-COVID policy, which saved people's lives; While in the eye of the US, what China was doing was merely a whack-a-mole game and was a "violation" of human rights. However, when China adjusted its policy and downgraded its management, the US still regarded it as a "violation" of human rights and a demonstration that China had abandoned its people. Amusing. So, it doesn't matter how hard Western countries try to slander China's efforts; as long as it continues to put people and life first, maintaining transparency and being open to international communication, history will make fair judgments, and those who play with fire will perish by it.