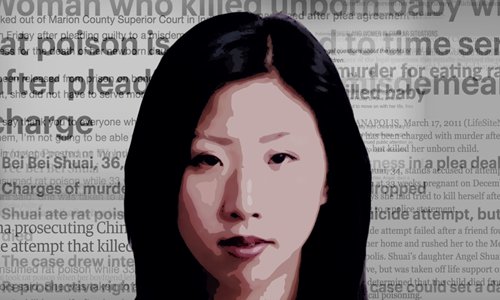 Rarely is a movie able to make the audience cry at the beginning. Bei Bei, a documentary produced by Incite Pictures achieved that almost impossible mission recently, at least for me.

In the fifth minute of the film, Shuai Bei Bei, a Chinese immigrant woman to the US and the protagonist, walks out of a jail in Indianapolis, Indiana, with her lawyer. She flashes a bright smile to the waiting media and cheerfully tells them in English: "I feel very happy." Then she sees a few familiar faces standing quietly in the crowd. They are her friends. She reaches over, hugs one of them tightly and starts wailing. "I am so sorry," she hollers in Chinese on the shoulder of the woman. "So sorry for what I have put you through."

The reason the scene brought tears to my eyes is that I still remember Shuai's case - one which every now and then would trigger headlines in national and international media from 2011 to 2013. The movie scene was set in May 2012 when she had just got bail after spending more than a year in prison, but I knew she still had a long way to go. And I know that this woman who kept saying sorry was indeed mistreated by the world and would never get an apology.

Shuai came to the US with her former husband in 2000. The marriage then fell apart. When she was running a Chinese takeout restaurant in Indianapolis she fell in love with the cook, a Chinese man called Guan Zhiliang. But Guan, a married man with two children who promised Shuai a future together, ended his relationship with her when she became pregnant.

Depressed and devastated, Shuai tried to commit suicide by swallowing rat poison. She survived. But the baby, who was delivered through a C-section, died two days later. Like that, Shuai became a suspect charged with murder and feticide in March 2011.

With the help of her sympathetic lawyer, Linda Pence, Shuai began a grueling journey to attempt to clear her name. She declined a plea bargain the prosecutor offered to plead guilty to the feticide charge in exchange for the murder charge being dropped.

Eventually, when the case caught broad public attention and the pressure of releasing Shuai mounted, the prosecutor reduced the charge to a misdemeanor for criminal recklessness. Having served enough jail time, Shuai was released right after she took the deal.

This case might have been forgotten if not for the efforts of Marion Lipschutz and Rose Rosenblatt, co-directors of the documentary who had followed the case and spent six years working on the film. They have been on a screening tour ever since and one stop was the Shanghai International Film Festival in June, in Shuai's hometown.

If timing can be considered a factor in the degree of pain a tragedy inflicts, Shuai's heartbreaking story clearly didn't happen at a good time. The efforts to turn over Roe v. Wade were growing; the organization Personhood USA had been formed three years earlier to promote the idea that a fetus has human rights; and nationwide many states had passed or were trying to pass laws that would allow anyone hurting a fetus to be charged, including the mother. And the prosecutor of her case, Terry Curry, was running for reelection and needed an instant victory to boost support.

But, of course, if the tragedy had happened today when conservatism has even more of an upper hand in the US and Roe v. Wade is in a more precarious predicament than ever, the outcome of the case might be worse.

I cannot help but think if Shuai was not an immigrant, would her situation have been as bad in the first place. Even if she could still be driven into a hazardous relationship by her loneliness, would a white woman in her situation be targeted and treated as badly.

The textbook says everyone is equal in the eyes of the law, but too many cases tell us equality is a fluid concept. In Shuai's case, as shown in the film, a letter she wrote in Chinese before her suicide attempt was used by the prosecutor as key evidence to show that she intended to hurt not only herself but the fetus as well. But it was sloppily translated into English.

And film director Rosenblatt told me when they tried to persuade the prosecutor to meet Shuai so that he'd know she was not an evil monster, he was not interested. "She is not an important person [to him]," Rosenblatt told me. Not long after Shuai's case, Indiana sentenced a woman to 20 years in prison for feticide and child neglect. She was an Indian immigrant - the sentence was later overturned on appeal.

Shuai said in the film, "I came to this country with all kinds of dreams. A dream's a good thing but [it] also can make people disappointed." Many immigrants will feel the weight of these words.