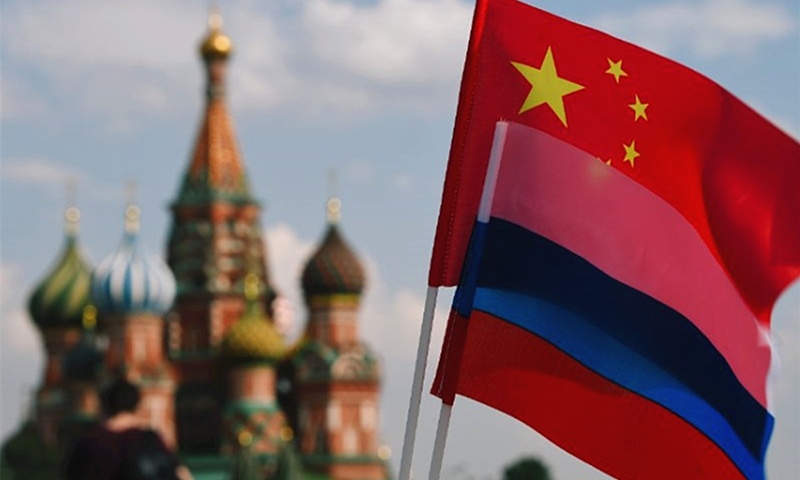 The national flags of China and Russia are seen on Red Square, Moscow.(Photo: Xinhua)

Chinese President Xi Jinping will have a video meeting with Russian President Vladimir Putin on Monday.

The two leaders on May 19 witnessed the ground-breaking ceremony of a bilateral nuclear energy cooperation project via video link. Besides, their Monday video conference is held after a series of international summits involving China-related and Russia-related topics, the Putin-Biden summit, and three days before the ceremony to commemorate the 100th anniversary of the founding of the Communist Party of China (CPC).

Such arrangement of the video meeting and the frequency the two leaders' meeting shows an increasingly deepening and consolidation of pragmatic cooperation between China and Russia. It also reflects the strong endogenous power of the two countries to advance their relations.

The joint guidance of the two heads of state is an obvious characteristic of China-Russia ties, which has made the two countries' relations keep stable on their track. In the meantime, Beijing and Moscow have supported each other on various vital issues. They mutually respect each other's development path, values and concepts, while coordinating about hot topics internationally.

As the CPC is about to embrace its 100th birthday, many Western media outlets have started a new round of vicious attacks on China and the CPC. A video meeting between Xi and Putin shortly before the ceremony of commemorating CPC's 100th birthday demonstrates Russia's support and endorsement of China's development model. This also reveals Russia's recognition and affirmation of the CPC's leadership and governance. This explains why Russia supports China's development path.

With the US' China policy becoming clearer, some American scholars hype-up the idea that Washington should strive to drive a wedge between Beijing and Moscow. The high-level interactions between Moscow and the Washington were believed to be part of US' such efforts. Whether or not China-Russia-US relations will change has thus been put under a big spotlight.

The Putin-Biden summit on June 16 was to some extent positive to Russia-US ties, but the glacier between the two countries is yet to melt. Why? Because their structural contradictions are still deep rooted. Furthermore, regardless of whether or not Russia-US ties improve, the friendly China-Russia relationship will hardly be influenced. Because China-Russia ties have established tracks and goals, become more and more mature, and generated increasing endogenous motivations.

Only days before his summit with US President Joe Biden, Putin told NBC News that "China is a friendly nation. It has not declared us an enemy, as the United States has done."

Such remarks have transmitted to the West a clear message of Russia: it is not as simple as some Americans think to sow discord between Beijing and Moscow. Another video meeting between Xi and Putin strongly refutes the slanders against China-Russia ties. Putin himself has long seen through the US, and thus it is believed that China-Russia relations will further deepen.

Putin said in early June that "the United States, with a confident gait, a firm step, is going straight along the path of the Soviet Union." The US-led West, with Cold War mind-set, now sees China and Russia as threat and challenge to the so-called democratic world. Washington is ganging up its allies against Beijing and Moscow, a move that will push the world into chaos again.

Against this backdrop, the more stable the China-Russia relationship becomes, and the louder voices between Beijing and Moscow become with joint statements, they will undoubtedly inject positive energy into the world's development. The fact that the two countries develop their ties on an established track serves as a ballast stone to the world's peace and stability.

The China-Russia relationship is at its best in history. The two countries' friendship is embodied in mutual political support, pragmatic economic collaboration, deepening military cooperation, and mutual trust between the two heads of state.

The China-Russia Treaty of Good-Neighborliness and Friendly Cooperation signed on July 16, 2001 has laid a solid legal foundation for the long-term, sound and stable development of China-Russia relations. The two sides also agreed that if neither side notify the other in writing of its desire to terminate the treaty one year before the treaty expires, the treaty shall automatically be extended for another five years.

The video meeting between the two heads of state at this juncture implies that the two countries will make corresponding adjustments in the treaty in accordance with the needs of new era on the basis of ensuring that the major principles of the treaty (for example, not directed at third countries) remain unchanged. This gives new connotations to the strategic partnership between the two countries.

The author is a senior research fellow in the Institute of Russia, Eastern European and Central Asian Studies at the Chinese Academy of Social Sciences.