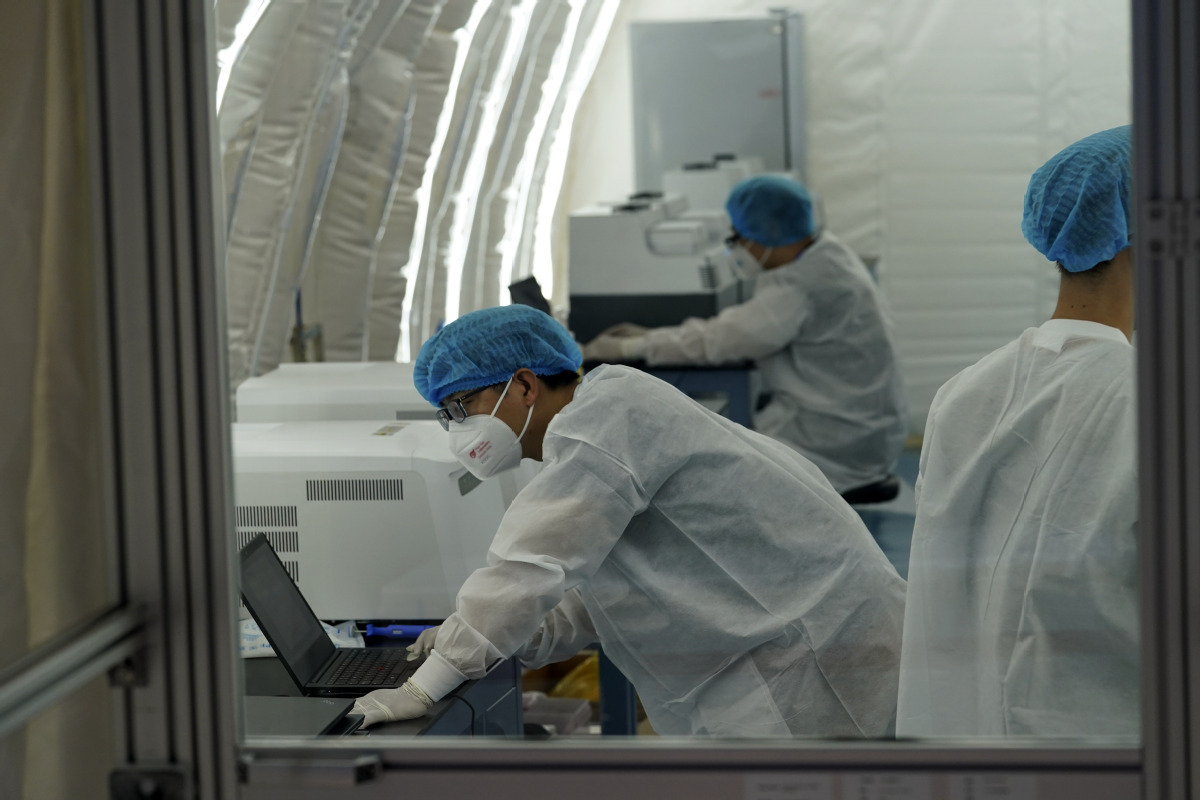 Staff members work at the Huo-Yan Nucleic Acid Testing Laboratory in Beijing on June 23, 2020. It is a mobile, automated, high-throughput nucleic acid testing laboratory that can meet the daily testing needs of up to 30,000 people. (Photo by Feng Yongbin / chinadaily.com.cn)

That Beijing reported zero confirmed locally transmitted COVID-19 cases on Monday, 26 days after a new outbreak was detected on June 11, highlights the efficient response of the municipal government.

The city has reported a total of 335 confirmed locally transmitted cases in nearly four weeks, with 320 people receiving treatment in hospitals, and the other 15 having recovered and been discharged. There are still 31 asymptomatic cases under medical observation, so there is the possibility that new confirmed cases could be reported in the days to come. The successful containment of the outbreak shows that transmission of the virus can be controlled and prevented if a set of well-planned measures is carried out to the hilt.

Beijing has mobilized its resources to test and trace. Establishing as many testing points as necessary to have all residents tested in areas with confirmed cases and locating all who have been in close contact with those infected. More than 10 million residents have so far undergone a nucleic acid test in the city.

The authorities have also raised the response level from three to two, which means all residents must have their temperatures checked when entering walled residential compounds and they must wear face masks in all public venues. Employees who can work from home have been instructed to do so to reduce the chances of transmission. All communities have adopted strict management measures, such as prohibiting non-resident entry to reduce the chances of community transmission.

Beijing has also used all necessary means including apps to trace all close contacts of those confirmed cases as quickly as possible, and then have them all tested and placed under quarantine for 14 days until they prove to be free from the virus.

What is particularly noteworthy is only areas considered high risk have been placed in lockdown. This practice has reduced to minimum the interference in business and social activities, and people's normal life.

What the country learned from its fight against the virus in Hubei province, and particularly its capital Wuhan, provided crucial reference for Beijing's control and prevention measures, and prepared the capital with the know-how to contain the outbreak as quickly as possible.

Residents in Beijing were also well prepared. Instead of panicking, they have done what they have been advised to do — staying at home, unless it was necessary to go out and wearing face masks when they do, washing or disinfecting their hands frequently, and practicing social distancing. Their vigilance and cooperation has made a great difference to what Beijing has achieved in its fight against the virus.

After Wuhan and Hubei, Beijing has set another good example of how well-organized and targeted control and prevention measures can effectively contain the spread of the virus.