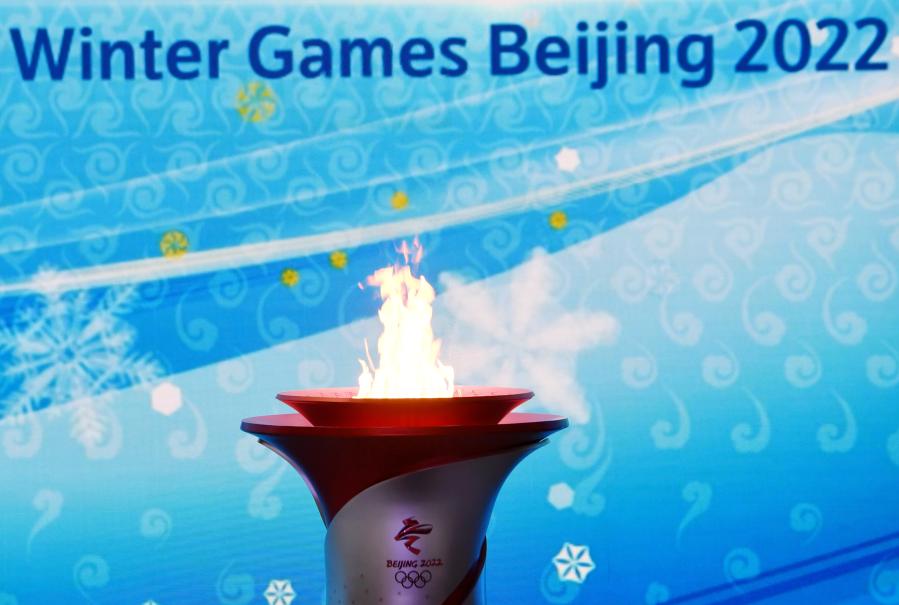 Photo taken on Oct 20, 2021 shows the cauldron during the welcoming ceremony for the flame of Olympic Winter Games at the Olympic Tower in Beijing. (Photo: Xinhua)

Calls from some quarters for a boycott of the Beijing 2022 Winter Games represent a serious threat to the ideals and principles upon which the Olympic movement was founded.

According to the International Olympic Committee (IOC), the three core values of Olympism are excellence, friendship and respect.

"Every individual must have the possibility of practising sport, without discrimination of any kind and in the Olympic spirit, which requires mutual understanding with a spirit of friendship, solidarity and fair play," the IOC says in its Olympic charter.

With this in mind, it is impossible to justify comments from U.S. and European politicians as well as some Western lobby groups, which have made baseless and hypocritical allegations related to Xinjiang, Tibet, Taiwan and Hong Kong.

Despite these ill-considered statements, there has not been a single National Olympic Committee (NOC), sponsor or athlete to withdraw from the Winter Games, which will take place from February 4 to 20.

In an open letter to the Olympic community published in September, IOC President Thomas Bach underlined the mission of the Games to "unite the world through peaceful competition."

"The Olympic Winter Games Beijing 2022 come at an important moment to bring the world together in the Olympic spirit of peace, solidarity and unity," Bach said. "It will once again be the athletes of these Olympic Games that will send this message of the unifying power of sport to the world."

"We have to respect the sovereignty of the countries who are hosting the games," Coates said in a speech to Australia's National Press Club. "We have no ability to go into a country and tell them what to do... it's not our remit."

Coates, who is also the IOC vice president, added: "[Being] united in competition, living together, exchanging opinions, sharing their life stories and dreams-that really matters. What matters even more is the rest of the world watching this. Watching how the Olympics creates an atmosphere of friendship, of understanding, of respect and of solidarity."

There has been seemingly universal enthusiasm among athletes to be a part of Beijing 2022. One of the highest profile stars to give a ringing endorsement of the Games is reigning National Hockey League MVP Connor McDavid.

"Just to be able to represent Canada at the Olympics and compete for a gold medal would be an absolute dream come true," McDavid said after being selected to take part in his first Olympics.

"The Olympics is one of the biggest dreams of mine and I haven't been able to participate in one - this might be the last chance I get," the 30-year-old said.

"The Olympics is big, and it's something that you shoot for, and you don't want to miss it," the 26-year-old American said.

Schiffrin added that the Beijing Winter Olympics "can actually bring hope to the world at a very difficult time."

Retired U.S. track speed skater Apolo Ohno said his countrymen should be focused on sporting excellence and not politics.

"My passion for sport to go beyond the borders and the politicized beliefs is something that I hold dearly to my heart," said the eight-time Winter Olympic medalist.

"I just want to see the purity of sport again. We want to see and celebrate and cheer for our country's men and women who go and compete, regardless of where the Olympic Games are being held," he added.

Pierre de Coubertin, the man credited with founding the modern Olympics, once said that "the most important thing in the Olympic Games is not winning but taking part."

It would be a great shame if this was forgotten as the world prepares for a post-pandemic celebration of sporting excellence, friendship and mutual respect.