OPINIONS Belt and Road Initiative makes winners of all

Belt and Road Initiative makes winners of all

India-based think tank, the Observer Research Foundation, published a report on its website last week by one of its experts, which claimed that "China is probably exporting its carbon emissions to the Belt and Road nations".

It also alleged that "the quality of employment created by Belt and Road projects "is far from being decent", asking, obviously in a challenging way, whether the initiative is "a true win-win situation or a double win for China". 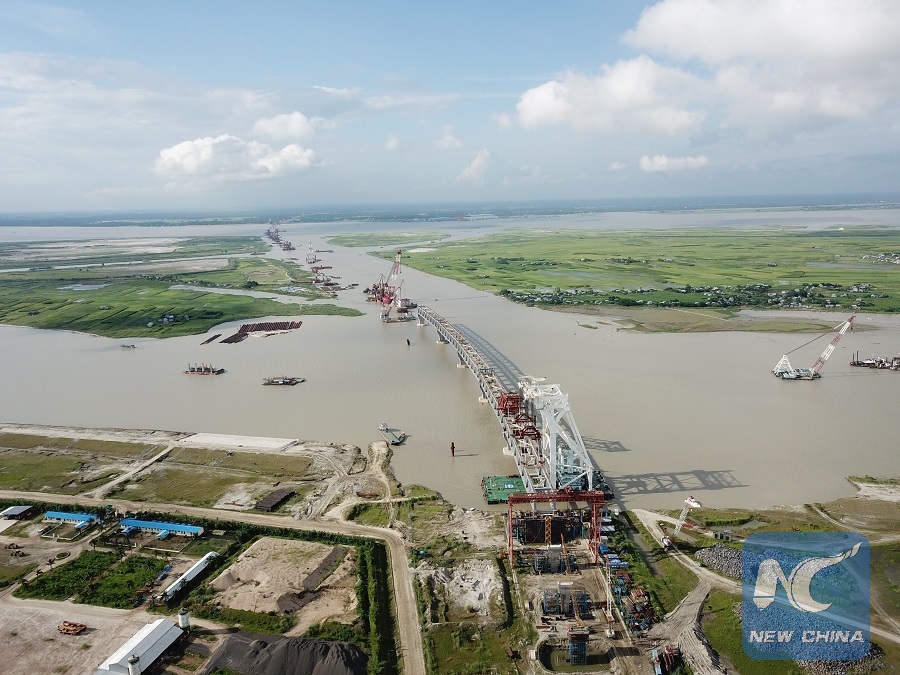 Photo taken on June 29, 2018 shows the construction site of the fifth span of the Padma Bridge on the outskirts of Dhaka, capital of Bangladesh. (Photo: Xinhua)

This is another attempt to misportray the initiative as being advantageous to China at the expense of partner countries and to smear its climate-action credentials as mere greenwashing. The ever-growing number of countries, regions and organizations participating in the initiative serves to rebut the claim that it solely benefits China. It would have died a natural death by now had that been the case. Instead, it continues to go from strength to strength.

And there are currently 134 partners in the Belt and Road Initiative International Green Development Coalition, which was launched at the Second Belt and Road Forum for International Cooperation held in Beijing in April. This coalition brings together the environmental expertise of all partners to ensure that the Belt and Road brings long-term green and sustainable development to all participants based on international standards and best practices. Rather than a means for China to export its carbon emissions, the Belt and Road has become a vehicle for countries and regions to realize their carbon reduction goals.

To take just a few examples: In Malta, Chinese enterprises are helping to build a "carbon-free island"; in Pakistan, the Karot hydropower station will soon start producing electricity, which is expected to cut 3.5 million tons of carbon dioxide emissions every year; in South Africa, the first wind power program invested in and constructed and run by a Chinese enterprise has reduced the country's carbon dioxide emissions by over 700,000 tons every year since it began operations in 2017.

Those trying to distort the Belt and Road Initiative into a tool of selfish purpose have their own axes to grind. But no matter how sharp they think the edges are, they will keep being blunted by the facts and figures.

Rather than its carbon emissions, China is exporting the dividends of its development to the Belt and Road participants.