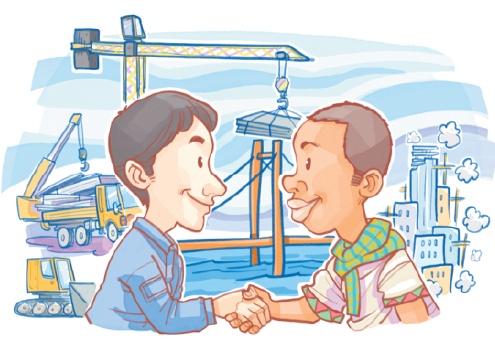 The Forum on China-Africa Cooperation is scheduled for later this year in Senegal. The first FOCAC Ministerial Conference was held in Beijing in October 2000, and in the past two decades, the fortunes of China and Africa have changed drastically. In 2000, China's GDP was one-tenth of the United States'. But in 2020, China's GDP of $15.6 trillion was about 75 percent of the US', while Africa's combined GDP increased from about $587 billion in 2000 to an estimated $3 trillion.

China has always been committed to promoting African countries' development. For example, in 2014, during Premier Li Keqiang's visit to the African Union headquarters, Nkosazana Dlamini Zuma, then chairperson of the African Union Commission, said, "African people cherish a dream that one day the capitals of Africa will be linked by high-speed railways". She added that, as a good friend of Africa, China is willing to make this dream a reality.

No wonder African countries see in the China-proposed Belt and Road Initiative an opportunity to develop their respective economies and facilitate the formation of the "African Continental Free Trade Area".

Africa needs about $93 billion a year up to 2025 to improve the continent's infrastructure. Without the improvement in infrastructure, Africa cannot achieve inclusive growth and sustainable development. Improved infrastructure will facilitate value-added economic activity and job creation. It will also promote private investment and help raise the living standards of the people.

A comparison of infrastructure development in Africa and other regions shows that telecom and internet access in Africa is only 16 percent compared with 80 percent in developed economies. In the transportation sector, every 1,000 people in Africa have access to 3.6 kilometers of road compared with the global average of 7 km per 1,000 people.

Which means Africa's infrastructure development is much below the average global level, as well as the levels of countries in East Asia and the Pacific, and Latin America and the Caribbean.

After China and the African Union signed a memorandum of understanding on Jan 27, 2015, China's contribution to Africa's infrastructure development has increased in line with Africa's Agenda 2063.

Today, China has many cooperation projects with Angola, Ethiopia, Tanzania, Nigeria, Kenya, as well as with Egypt, Algeria, Sudan and Zambia. China has been helping the African countries to boost their economic development, and hopes to expand the reach of such projects.

The improvement in the transportation system can boost the economy of a country and raise the incomes of the people.

As for water conservancy and electricity projects, China has helped develop the Zambezi River resource utilization project. And the south and north coast of Kariba Lake power stations, the Zambia Kafue Gorge Hydropower Station and the Lesotho Metolong Dam, developed by Chinese companies, have strategic significance for Zambia, Lesotho and other countries.

The list of Chinese companies-led infrastructure projects, completed and undergoing, is too long, and they cover, among other areas, ports, urbanization and telecommunications under the Belt and Road framework. And the common aim of these projects is to help boost the African continent's development.

There are more than 30 functioning industrial parks established by Chinese companies in collaboration with local governments in African countries, and over 70 more such parks are under construction.

Also, China has already begun relocating some of its manufacturing units to Africa.

And the first stage of the China-Egypt Suez Canal special economic zone project has been completed, creating about 30,000 direct and indirect employment opportunities.

The Chinese-made industrial zones will add value to African resources and help boost the economies of countries such as Rwanda, which is already shifting from agriculture-based economic development to information technology-driven economic growth.

So the Belt and Road Initiative will not only create trade opportunities for Asian, African and European countries but also pave the way for Africa to become an important part of the global supply chain and attract more international investments, which would boost its development and help improve African people's lives and livelihoods.