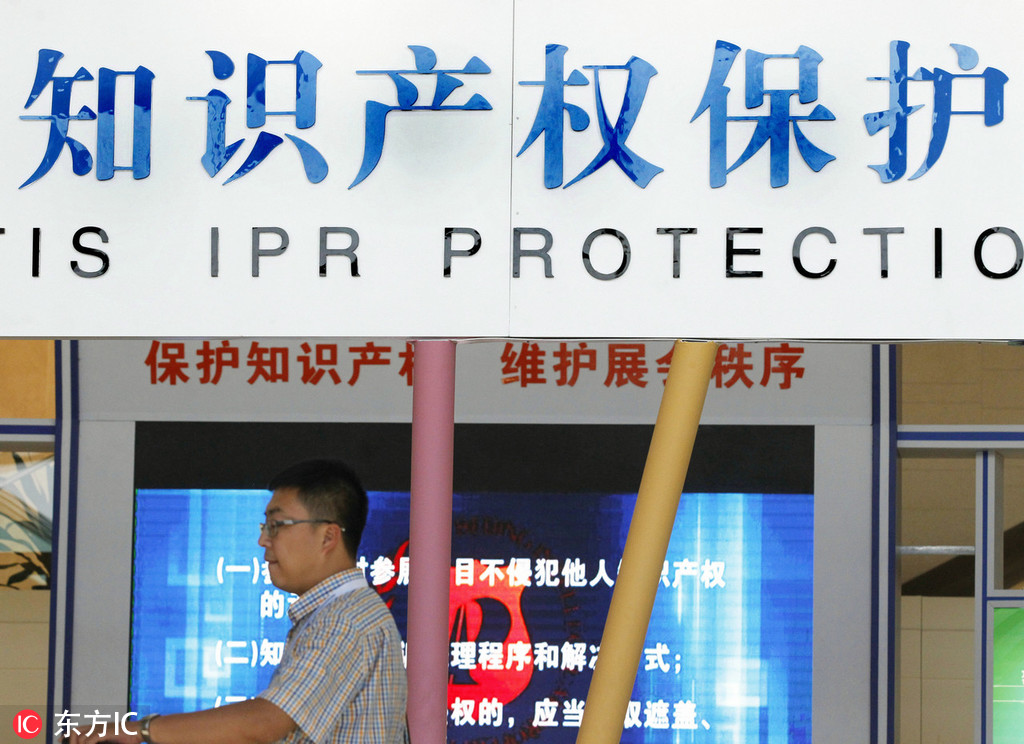 A visitor walks past a sign for intellectual property rights (IPR) protection during a trade fair in Beijing, on May 29, 2016. (Photo: IC)

The box office collection of more than 2 billion yuan ($300 million) in the first week and its rating of 8.7 out of 10 on Douban, a Chinese film review website, have prompted film critics to say Ne Zha is a milestone for China's animation industry and embodies its inevitable rise.

Both the success of the movie and its significance for China's animation industry are worth celebrating and discussing. But the news of pirated Ne Zha derivative products, such as T-shirts, cups, toys and mobile phone cases, are being sold online forced the filmmakers to post a statement on their official Weibo account, saying "only the authorized version of derivative products are legal". Later, Ne Zha financiers posted another statement, urging the public to boycott pirated products.

Which prompted me to think about another far-reaching issue: To what extent will the creation of legendary Chinese figures on screen be successful? And can the intellectual property rights (IPR) holders help the Chinese animation industry to keep expanding?

Although the producers of Ne Zha said they want to make it a brand, even an ecosystem, rather than a temporary fad, they didn't seem to realize their precautionary measures may not be enough to deal with the overt and covert infringements.

Which shows Chinese animations don't have adequate IPR protection, and despite Ne Zha being a great success story, there is still a long way to go before filmmakers can be provided with foolproof IPR protection.

IPR protection is essential to the development of the cultural industry. A case in point is Disney. Mickey Mouse and Donald Duck have been popular for decades and have helped Disney build a successful business empire with movies, theme parks and a rage of derivative products because the company, as the IPR holder, has adopted a stringent IPR protection policy.

China has made great progress during the last decade in improving IPR protection for the animation industry. The establishment of Beijing Intellectual Property Court, the first court that deals exclusively with IPR cases, is a landmark. Since being established in 2014, the court has dealt with some typical IPR cases related to animations, and protected the rights of the real IP holders. But there is still room for improvement.

For instance, if an IPR owner based in Beijing discovers that a shop in a small city in Hainan province is selling his or her IP-related products, he/she has to hire a lawyer and fly all the way to Hainan to file a lawsuit against the IPR infringer to claim damages.

A scientific and comprehensive layout of IP resources is the first step to ensure IPR protection, while planning is also an important task. So one should use every possible way of developing and exploiting IP-related products and services before entering the market. But making precise plans is almost impossible. That's why it requires many years of experience in the industry, an acute market sense and sometimes a stroke of luck to succeed in the market.

It is equally important to work out a clear contract of the ownership between the financier and the designer (or IP-product developer) to avoid disputes in the future. In copyright law, the person or organization that develops the product holds the copyright. In the animation industry, however, the investor (or investors) is more likely to sign a series of contracts with the artist or designer to buy the IP rights.

Legal disputes always crop up between designers and investors over the ownership of animations, trademarks and other subjects. So it is important to not only have clear contract terms and copyright registration, but also the evidence to prove creative products such as drawings and animations belong to the artists.

Besides, there is a need to protect IP ownership systematically, as in the animation sector specific IP elements need specific IPR laws to be protected. For instance, movies, drawings and songs are protected under the copyright law, trademarks by the trademark law, and certain 3D technology products or designs by the patent law.

IPR holders should adopt a systematic approach to protect their products, even if they have to seek the help of different laws. Specifically, IPR holders should seek copyright registration for different kinds of products, timely apply for a trademark or patent if they develop any innovative 3D technology or create an animation.

By raising their IPR protection awareness, IP owners can better protect their rights and help boost the Chinese animation industry. In order to encourage innovation and creation, the authorities should guarantee sufficient compensation to the IPR holders in case their IP ownership rights are infringed, and take measures to develop a fairer market environment. And the public should extend more support to Chinese animations to help the animation industry develop smoothly.

Only through the joint efforts of the IPR owners, the authorities and the public can the Chinese animation industry thrive in the near future.

The author is an assistant judge of the Beijing Intellectual Property Court. The views don't necessarily represent those of China Daily.