OPINIONS Beyond the pandemic: Isolation or common destiny?

Beyond the pandemic: Isolation or common destiny?

Globalization can only be achieved through joint efforts of all humanity. The pandemic is but another facet of the level of globalization that has cropped up as an inevitability and reality of the current situation today. Instead of spurning globalization, humanity should instead spur it further, and see deliberation on it as beneficial for humanity. 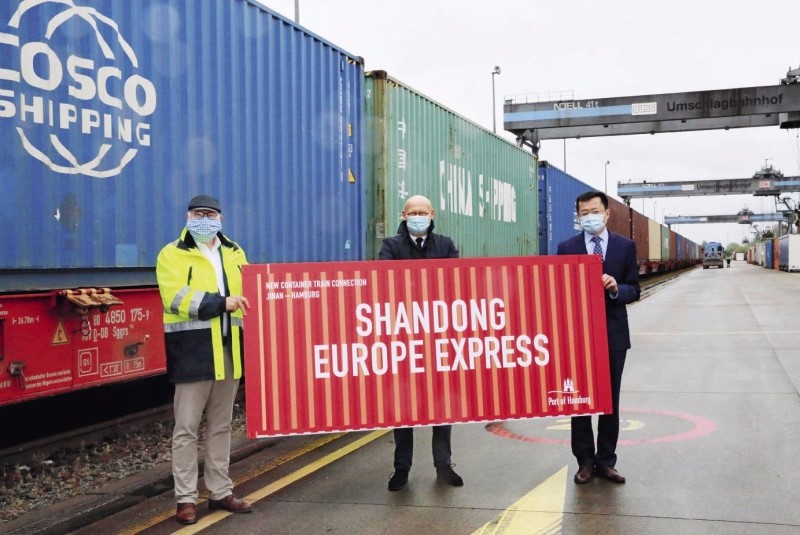 At the beginning of 2020, the rise of a global crisis unparalleled during peacetime in recent history crippled the world, and again encouraged discussion and deliberation of the notion of shared future.

As the pandemic spreads and reshapes the human way of life around the globe with far-reaching impact, much debate and discussion is going on regarding how the pandemic and its aftermath will reshape globalization and global governance. There are still efforts being considered to deter globalization, to reverse it, and to attempt to take the world back to the time of isolation.

Today's globalization, instead of being optional, is instead an inevitable reality that must be improved upon and strengthened. Rejecting globalization is not only counter-productive, but will also seriously harm the global economy during an ongoing pandemic with lasting effects.

In the post-pandemic era, we must confront the trends of and laws governing globalization, adhere to the concept of a community of a shared future for mankind, and construct a new form of international relations featuring mutual respect, fairness, justice, and win-win cooperation.

Globalization Is not the Cause of the Spread of a Pandemic

The lack of consensus on governance in encountering the spread of COVID-19 was facilitated by insufficient initial prevention action and politicization of epidemic prevention and control in some countries, leading to its rapid spread around the world. It is a consensus in the international public health community that the outbreaks of epidemics are inevitable whereas the spread can be avoided. Globalization is important for a collective anti-epidemic drive through solidarity and cooperation of all humanity.

During the past few years, imbalanced and inequitable development of globalization led to resentment, which led to the rise of populism and protectionism, and the incubation of an anti-globalization sentiment. In response to COVID-19, each country has harnessed diversified approaches in dealing with it such as isolation, control, and strict customs supervision.

As a result, firstly, in the short term, flow of people and essential goods are impeded which will cause a slowdown in globalization and global development and growth; secondly, countries attempt to deal with and come to terms with these challenging circumstances on their own terms and will be limited by their own resources and unique situations, facilitating populism and protectionism to gain traction and further obstruct globalization.

In review of the historical process, globalization has not presented equal benefits to all countries and groups in the world, with the rich becoming increasingly wealthier while the impoverished face more destitute circumstances. It is inevitable that globalization would be harshly critiqued by those countries and groups that were unable to protect their interests and achieve their desired or expected level of progress. It will help people to realize that in the global economic system all countries are in the same boat, and that increasing globalization and improving productivity have vulnerabilities and lead to imbalances while exploiting comparative advantages.

Analysis reveals that globalization is not the cause of the spread of the pandemic in the world, but the scapegoat used by some countries and politicians who shirked their responsibilities. All nations should strive to address challenges head on, and seek rational solutions to issues of concern rather than shirking their responsibility. The pandemic has hit the global economy hard, and gloom pervades the international market as globalization reels. The trends of anti-globalization, unilateralism, and protectionism are gaining momentum.

Globalization Is not an Unexpected, Phenomenon without Historical Precedent

Globalization is not something that is achieved overnight, but the product of a long period of gestation and pursuit. With high complexity and resilience, its course cannot be altered by a single event.

Since commencing in the 16th century, the process of globalization has indeed encountered multiple critical challenges, setbacks, and crises which have engendered gigantic transformations in the global economic and political situations over time. Nonetheless, the trend of globalization has never ceased or reversed, but continued to develop in a wider range, at a higher level, and to greater depth after adjustment, integrating human society into a closer knit community.

Similarly, COVID-19 may strengthen the anti-globalization trend in the short term amid the rise of prices of bulk goods, breakdown of certain industrial chains for a short duration, division and reorganization of international forces, and political turmoil in some countries.

However, the more objective reality to be acknowledged is that all countries in the world maintain a strong motivation to resume economic growth, reluctant to restrict economic activities even in the acute proliferation of the epidemic.

Once the epidemic is slightly alleviated, they cannot wait to restart the economy. Economic recovery will be an extremely protracted and painful process in an economic system independent of global production and supply chains, and “a fragmented world.” It will only prolong the economic stagnation and economic downturn brought about by the current crisis, which is not in line with the common aspiration of countries in the world.

The interconnection of all things has become the most pronounced feature of human activities in our modern world. The progress of the Internet and the Internet of Things technology, as well as the change of production patterns and communication modes brought about by it, are irreversible. The rapid development of artificial intelligence, in particular, including AI, big data, cloud computing, and 5G technology, makes the interconnection of human beings more convenient and closer.

A divided global market will prevent these new technologies from functioning and producing the benefits promised by their potential, and countries will also not be able to access their resultant economic benefits and conveniences. If all countries want to survive in this interconnected world and enjoy the efficiency and convenience brought by it, they can only actively enter the global market and global industrial chain.

Globalization represents the historical choice of human beings, and conforms to the requirement of interconnection of all things in this era, which will not be hindered by a pandemic, nor will it be blocked by certain conservatives and populists.

Globalization Is the Future Direction of Human Development

Global solidarity and cooperation is the sole approach to controlling the pandemic. At present, the global response is still in a critical stage, and all nations must reach a consensus on disease prevention and control and acknowledge that viruses are the common enemy of humankind regardless of national boundaries. Only by abandoning biases based on personal ideology, social systems, race, and religion, enhancing mutual trust and cooperation, and working together can the chaos and agony brought about by the pandemic be halted at an early date, and peaceful and normal life be restored.

All countries must strengthen policy coordination, joint prevention and control, intensify communication and information sharing, and assist developing countries with frail public health systems to heighten their response capacity. Only when each country wins the battle against the virus can the global move achieve the ultimate win. The global industrial chain needs to deepen capacity cooperation, tap capacity potential, and improve supply capacity.

Meanwhile, international organizations should be given free rein in epidemic prevention and control. The World Health Organization is the guidance and coordination agency for health issues under the aegis of the United Nations system, its major mission being to bring about improving global health governance and assisting countries around the world to meet public health security challenges.

Since the outbreak of the epidemic, the WHO has played an important role in material assistance, coordination, cooperation, experience and information sharing, and other aspects. Countries should firmly support the leadership of the WHO, adhere to epidemic prevention cooperation and information sharing within the framework of the WHO, and achieve a victory against the pandemic as soon as possible.

Judging from the development trend of COVID-19, economic globalization may temporarily slow down to some extent, but will not change course and will instead proceed to gain steam. Certainly, the epidemic also made people more aware of the deficiencies of globalization. The U.S., especially the financial oligarchs in the U.S., reaped the greatest benefits of globalization.

Certain countries, including people lower in the economic ladder in the U.S., have gained little dividends. In the post-pandemic era, globalization and global governance will usher in new historical adjustments, which will be more in line with the development requirements of all countries in the world, especially developing countries, and will be more inclusive. Globalization should not serve as a tool for some major countries to maximize their own interests.

In the post-pandemic era, globalization will enter a period of profound adjustments, the outcome of the evolution of the world’s situation and the development of nations across the globe. The changes are expected to be as follows: First, the role of the state in the market will be hoisted, there will be “big government,” and state intervention will intensify, leading to increased trade frictions.

Second, strategic contention among big countries will intensify, which will result in the reorganization of the geo-economic and geo-political order and pattern in varied regions, with distinct responses in East Asia, Europe, and the Middle East. Third, technological innovation and competition will be fiercer, and new technologies, new business models, and new industries will emerge, which will not only accelerate economic and social development, but also determine the standing of nations in international competition.

Mankind is a community with a shared future. Encountering major events in the field of global public health, competing voices are inevitable. But all countries are victims of this pandemic, therefore, survival and progress demand a globalized mode of thinking. Attaining triumph over the virus requires a scientific and rational consensus rather than blindly complaining and blaming.

COVID-19 has slowed down globalization, but will not change the direction of globalization nor the trend of the times. Although trade protectionism and frictions may be fierce for a long time in the future, the trend toward a global community with a shared future is sustainable, and globalization will continue to be the direction which human society is headed toward.

(Hou Yuxiang is dean of the School of Middle Eastern Studies of the Beijing International Studies University. Wu Sike is a senior diplomat and China's former special envoy on the Middle East.)