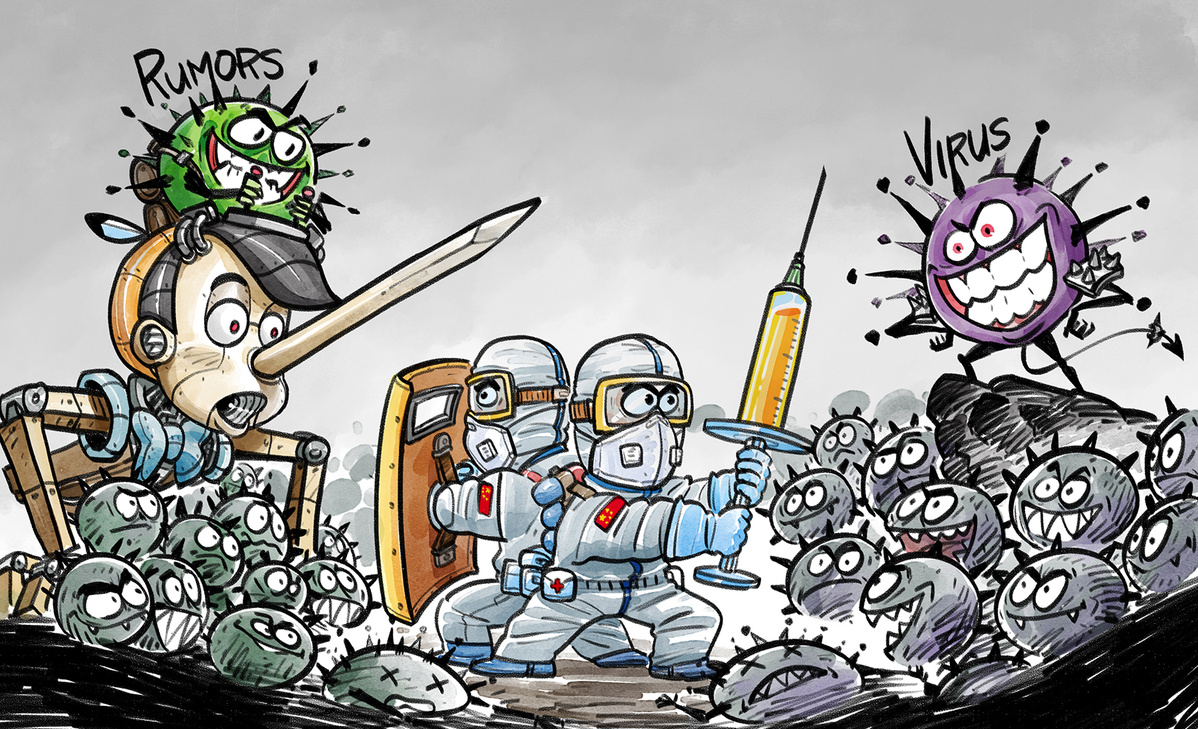 Due to its vast territory, varied landforms, different climate conditions, and a huge population, China may have faced more disease outbreaks than many other countries. But in their attempt to identify the cause of diseases like the severe acute respiratory syndrome and novel coronavirus pneumonia, many Western media outlets blame it on the Chinese people's love for exotic food, to boost their health or to treat a serious disease.

With the increasing number of such stories and narratives being propagated, it is evident that some in the West want to exploit a pandemic to defame China.

But if China is relatively more vulnerable to disease outbreaks, it is also better equipped than most countries to bring them under control. The success of the Chinese government and people in the fight against outbreaks in the past aside, after the coronavirus outbreak, the government has implemented stringent measures to prevent and control the spread of the virus. And once again, the Chinese people have demonstrated their ability to quickly assess a situation and take the right decision to address it.

Leaders in other places are often indecisive

In other parts of the world, a more transparent environment may have improved governance, but it has also put the leaderships under a lot of pressure. As a result, a majority of them fail to take timely and balanced decisions in the face of a challenge. Often, they try to make a politically correct decision in difficult situations such as an epidemic outbreak, and waste precious time in the process.

By contrast, the Chinese leadership's approach, such as locking down a city and imposing restrictions on the movement of people and vehicles just before the most important festival for the Chinese people (Spring Festival), speaks volumes about its farsightedness, because the hundreds of millions of people moving across the country and beyond the borders could have transmitted the virus to others and made the epidemic many times more fatal.

The construction of two huge hospitals in less than two weeks in Wuhan, capital of Hubei province and the epicenter of the epidemic in China, helped the doctors and nurses treat thousands of novel coronavirus pneumonia patients and thus not only prevented the virus from spreading further but also saved thousands of lives. Yet many Western media outlets were highlighting stories of how patients with other diseases were suffering because of medical "neglect".

On the economic front, China's resolve to endure losses of billions of dollars by shutting down factories is no less remarkable a decision. Sadly, this gave China hawks in the West an opportunity to speculate on the possible collapse of the Chinese economy.

Also, China's detractors are churning loads of data to "guesstimate" possible delays in, even abandoning of, projects under the Belt and Road Initiative framework.

In fact, Google News, one out of many online news agencies active in Pakistan, is flooded with reports on the impact of the coronavirus outbreak on the China-Pakistan Economic Corridor. Perhaps such websites popular in other Belt and Road partner countries are also indulging in similar anti-China activities. Their aim, it seems, is to lower the morale of the Chinese nation and Belt and Road partner countries.

But thanks to China's highly efficient system of near instant response to meet the people's needs, there is neither public panic nor mistrust in the leadership in China. And because of the trust in the leadership, many common people, despite knowing that there is still no vaccine against the virus, are volunteering to help with medical services.

That the leadership's resolve and determination, notwithstanding the Western propaganda, has yielded results is evident from China's success in virtually containing the outbreak. And judging by different countries' response to the pandemic, it is nightmarish to imagine the extent of damage it would have caused had the novel coronavirus outbreak occurred in another country.

For example, the N1H1 flu outbreak hit the United States just over a decade ago, in 2009, but the way the US administration handled it raised many questions on the capability of the world's only superpower to fight medical emergencies. Since it took months to appropriately respond to the H1N1 outbreak, the virus spread to more than 214 countries and regions claiming thousands of lives.

But despite the poor response of the West to medical emergencies and China's successful prevention and control measures, some Western politicians and media outlets are trying to exploit the coronavirus outbreak to criticize China. They have targeted the Chinese leadership and political system even though the World Health Organization has praised China's handling of a very complex situation, which could have posed a much bigger threat to the world.

If prejudice is put aside, countries across the world can learn from China how to respond to an epidemic. After the outbreak, I have talked with many Chinese government officials, some friends, and even a youngster. It was amazing to know about their belief and confidence in the Chinese leadership. None talked about any foreign conspiracy theory nor did they accuse anyone of possible slackness.

Although there are some stories about the possibility of a "covert biological attack by some adversary country", the Chinese government and people have made mature and correct decisions, focusing their attention on controlling the epidemic and preventing the spread of the virus.

Yet despite their near perfect response to the coronavirus outbreak, once again the Chinese authorities have not paid due attention to perception management, thereby leaving the field open to usual exploitation by foreign anti-China elements and media outlets.

Therefore, in an environment dominated by the Western media, the world has no option but to listen to their conspiracy theories, which they mix with speculations to pursue their anti-China agendas. But now that the Chinese authorities have read the script, they also need to tell the world the real story of how it has brought an emergency almost under control.

Enhanced interaction with the world will help China to distinguish between friends and rivals. Although in the current environment, winning worldwide trust may not be easy, an innovative approach can help China earn the confidence of a greater section of the international community. And as is its wont, China can turn the present crisis into an opportunity, exhibiting its resolve and determination to overcome all odds in its forward march.

The author is a freelance writer and a retired brigadier of Pakistani Army. The views don't necessarily represent those of China Daily.