While pro-West media agencies in Hong Kong and others condemned the police brutality when officers pulled their guns Sunday, more internet users urged biased media to depict the entire story and cease misleading the public. 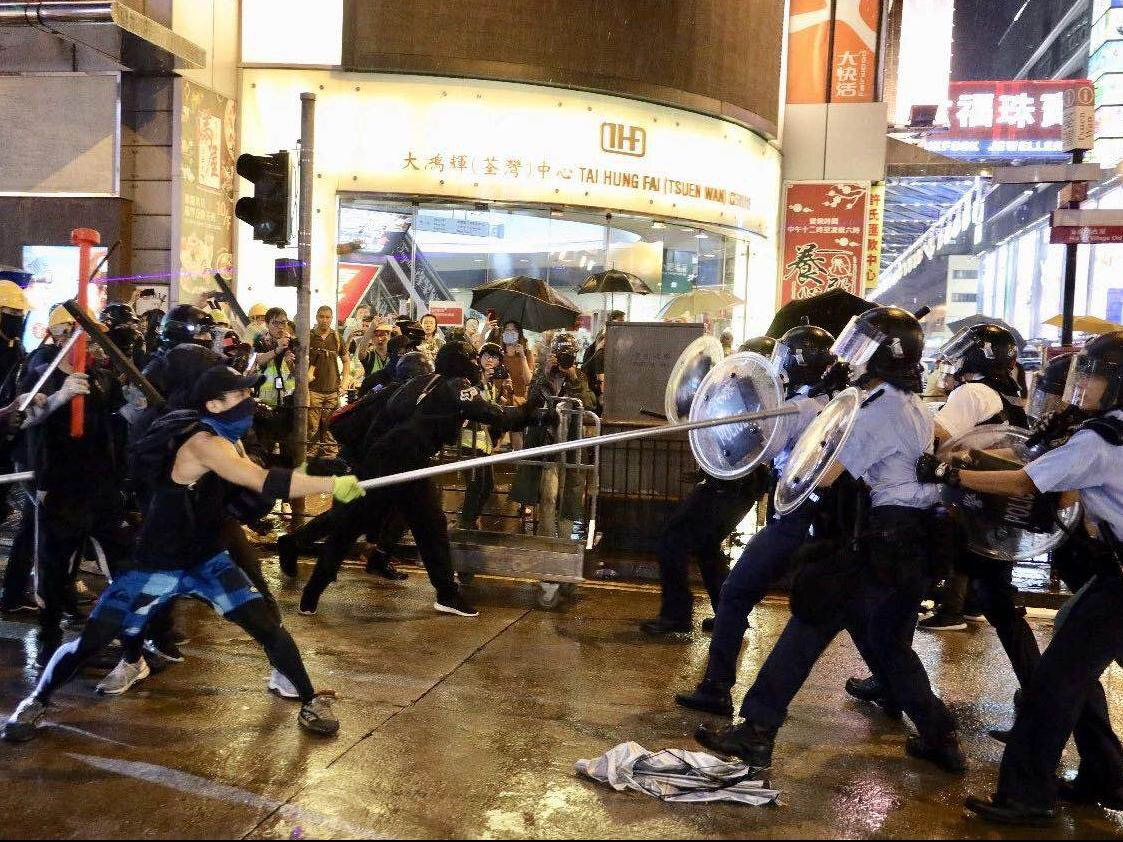 Surrounded by protesters, riot police retreated while some journalists covered for the protesters just as they've done since the demonstrations started months ago. Authorities arrived to disperse the crowds at Yeung Uk and Tsing Tsuen roads, which were illegally occupied by violent protesters, who still threw petrol bombs at the police and slashed passersby with knives.

Fires, bricks, and tear gas have destructed the neighborhood, disrupting the daily lives of residents in the area.

However, when protesters confronted the police at Sha Tsui, they attacked them while shouting insults at them. To protect themselves, police officers pointed their guns at protesters while some reporters remained standing in their way.

Some media agencies reported that the police had targeted journalists and unarmed citizens, as bystanders became involved in Sunday's clashes. Anti-government protesters highlighted the moment when the police drew their guns, intentionally playing down the act.

After rioters damaged shops and hurled insults into people inside, at around 10:00 pm, emergency units arrived.

Yu said rioters attacked the police and one officer fell down, but the rioters continued to charge.

"At that point, our officers' life was certainly in great danger," Yu said, noting that the officer fired one warning shot into the air, but no one was hit. Meanwhile, six officers raised their guns as a cautionary measure.

The distorted narratives on the Hong Kong police reminded the public of last month's incident at the Kwai Chung police station when an officer pointed his gun at a protester.

Some western and Hong Kong media agencies accused the policeman of committing a violation by waving a shotgun at the protesters. However, media failed to show the footage of what transpired before the officer raised his gun.

"If he did not respond to those rioters in that way, he might have been beaten to death," a former senior police officer told the Global Times.

Biased coverage has put the Hong Kong police in a dangerous position, as stories about police brutality have surfaced in recent weeks. Without considering facts, some Hong Kong reporters have stood the anti-government protesters, abandoning the fundamentals of neutral and justified reporting.

"If you hurt the lives of the police in the US, the police will shoot you at any time," said one internet user on Twitter. "The video proves that Hong Kong police are too kind."

Another netizen said western media only shows propaganda without context regarding the protests.

Using social media to cast a bad light on the police has had a negative influence on the population, David J. Jordan, chief superintendent of the Hong Kong police tactical unit, told the Global Times in a recent interview.

"Unfortunately, it's one photo that will be used to explain a four-hour situation," Jordan said.

Chinese mainland netizens expressed outrage toward the biased media coverage of the clashes between the police and rioters. "Those reporters are rioters with journalist vests!" said one netizen Sunday night